Anastasia Pchelintseva and Anna Shalunkina after their weddings to Dmitry Pchelintsev and Maxim Ivankin. Photo courtesy of 7×7 and Novaya Gazeta

Dmitry Pchelintsev and Maxim Ivankin, two defendants in the Penza trial of the so-called Network (a terrorist organization banned in Russia)* have been married in remand prison, reports 7×7.

Registry Office workers registered Dmitry Pchelintsev’s marriage to his girlfriend, Anastasia Tymchuk, in the room on the premises of Penza Correctional Facility No. 4 where the defendants are currently held. Journalists, relatives, and friends of the couple were not allowed to attend the ceremony. Tymchuk reported that the groom made her a windcatcher as a wedding gift.

Another defendant in the case, Maxim Ivankin, registered his marriage to Anna Shalunkin at Penza Remand Prison No. 1. Ivankin had proposed to his girlfriend right in the courtroom after one of the hearings in the trial, presided over by judges from the Volga Military District Court.

“The whole procedure took two minutes,” Shalunkina said after the ceremony. “We only managed to ask each other how the other was doing. Whereas [Pchelintsev and Tymchuk] were allowed to sit next to each other and chat, here [in remand prison] there were two stools, a table, and a cage. I stood next to the table, and [Ivankin] stood in the cage. We were permitted to kiss each other only through the bars.”

Shalunkina explained that she had decided to marry Ivankin now because if he is found guilty, it is unclear where he will be taken to serve his sentence.

In August of last year, Yuli Boyarshinov, a defendant in the Petersburg portion of the Network Case, was married in remand prison. His bride wore a paper veil, and their wedding rings were fashioned from barbed wire.

A report about the weddings by 7×7

Eleven antifascists from Penza and Petersburg were arrested by the FSB several months before the 2018 presidential election. According to investigators they were planning to create armed groups in Moscow, Petersburg, Penza Region, and other Russian regions for attacking military garrisons, police officers, and United Russia party offices.

The trial in Penza against seven of the defendants—Maxim Ivankin, Vasily Kuksov, Mikhail Kulkov, Dmitry Pchelintsev, Arman Sagynbayeva, Andrei Chernov, and Ilya Shakursky—has concluded. All of them are charged with organizing [and/or] being involved in a “terrorist community.” Shakursky, Pchelintsev, and Kuksov also face charges of arms trafficking. On February 10, a panel of three judges from the Volga District Military Court will announce the verdict.

The case against Boyarshinov and Filinkov is being tried separately by the Moscow District Military Court, sitting in Petersburg.

Another defendant, Igor Shishkin, pleaded guilty and was sentenced to three and a half years in prison.

The defendants have reported that FSB officers tortured them to force confessions. In a complaint filed with the European Court of Human Rights, Filinkov said that FSB officers had beaten and electrocuted him, deprived him of food, water, and sleep, and subjected him to psychological pressure.

* Russian media are required by law to identify this perverse fiction by the FSB in this way.

Thanks to Anatrrra for the heads-up. Translated by the Russian Reader

If you have not been following the Penza-Petersburg “terrorism” case aka the Network Case, and other recent cases involving frame-ups, torture, and violent intimidation by the Russian Federal Security Service (FSB) and other arms of the Russian police state, read and share the articles I have posted on these subjects. 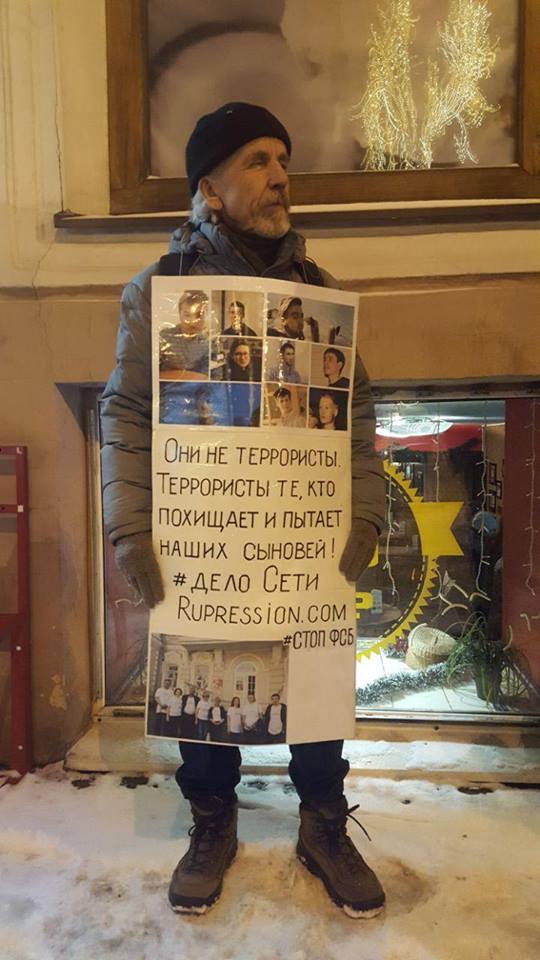 “They are not terrorists. The terrorists are the ones who kidnap and torture our sons! #NetworkCase, rupression.com, #StopFSB,” reads the placard held in this photo by Nikolai Boyarshinov, father of Network frame-up “suspect” Yuli Boyarshinov.

Mr. Boyarshinov has been going to Petersburg’s main street, Nevsky Prospect, and getting out his message by picketing alone every Friday for a long while now.

By law, solo pickets are a perfectly legal tool of protest and dissent in Russia. They do not require prior authorization or notification from local authorities, unlike mass protests.

(Mass protests actually don’t require prior authorization, either, only prior notification, but the Putinist authorities forcibly shut down all “unauthorized” mass protests as a matter of practice.)

And yet Mr. Boyarshinov was arrested by police yesterday for no reason whatsoever.

His arrest is the latest in a series of arrests and harassment of solo picketers in Russia’s former capital.

It would seem the Putin regime is not happy ordinary Russians like Mr. Boyarshinov still enjoy the freedom to protest in public at all, so they have decided to try out illegal arrests of perfectly legal solo picketers in Russia’s second largest city by way of further intimidating the country’s grassroots and opposition. {TRR}

Thanks to Natalia Vvedenskaya and Solidarity Saint Petersburg for the heads-up.

If you have not been following the Penza-Petersburg “terrorism” case and other recent cases involving frame-ups, torture, and violent intimidation by the Russian Federal Security Service (FSB) and other arms of the Russian police state, read and share recent articles the Russian Reader has posted on these subjects.

A monument to Felix Dzerzhinsky, founder of the Soviet secret police, in central Petersburg, 6 May 2018. Photo by the Russian Reader

Ukrainian political prisoner Oleg Sentsov has been on hunger strike for sixty-six days.

Can you imagine not eating for sixty-sixty days? I can’t.

Instead of supporting Mr. Sentsov, most of the world decided to turn its back on him by staying glued to their TV sets during Vladimir Putin’s expensive celebration of his despotic regime’s extraordinary ability to pull the wool over nearly everyone’s eyes.

Certainly he didn’t get any pushback yesterday from the putative “leader of the free world,” who is a vain, spineless traitor who has probably never heard of Oleg Sentsov.

Solidarity with Oleg Sentsov doesn’t mean you have to stop eating, too, but it should mean not having your cake and eating it, too.

The World Cup was cake. Nobody can live for a month on a diet of cake without getting sick. The world has just done it, and now, at least as I see it, the world is a lot sicker than before the World Cup.

When infants are baptized in the Lutheran church, the priest asks the godparents and parents whether they “renouce the Devil and all his ways.”

Putin is a devil. You cannot embrace some of his ways while denouncing others. You either take the whole package or reject it. If you reject it, you show a little bit of willpower—for the sake of Crimean political prisoners Vladimir Balukh and Oleg Sentsov, for the sake of people bombed by the Russian airforce in Syria, for the sake of persecuted Karelian historian Yuri Dmitriev, for the sake of Russian Jehovah’s Witnesses, now branded “extremists” and subject to increasingly numerous arrests, for the sake of the innocent young people framed in the New Greatness and Network “terrorist” cases, for the sake of ordinary Russians everywhere fighting the government’s plans to drastically raise the pension age—and you don’t have anything to do with the World Cup or anything else sponsored, promoted, and supported by the current Russian regime.

The sheer number of people, including my own acquaintances, who could not bear to show solidarity with any of these people at all, if only for one month, has shocked me.