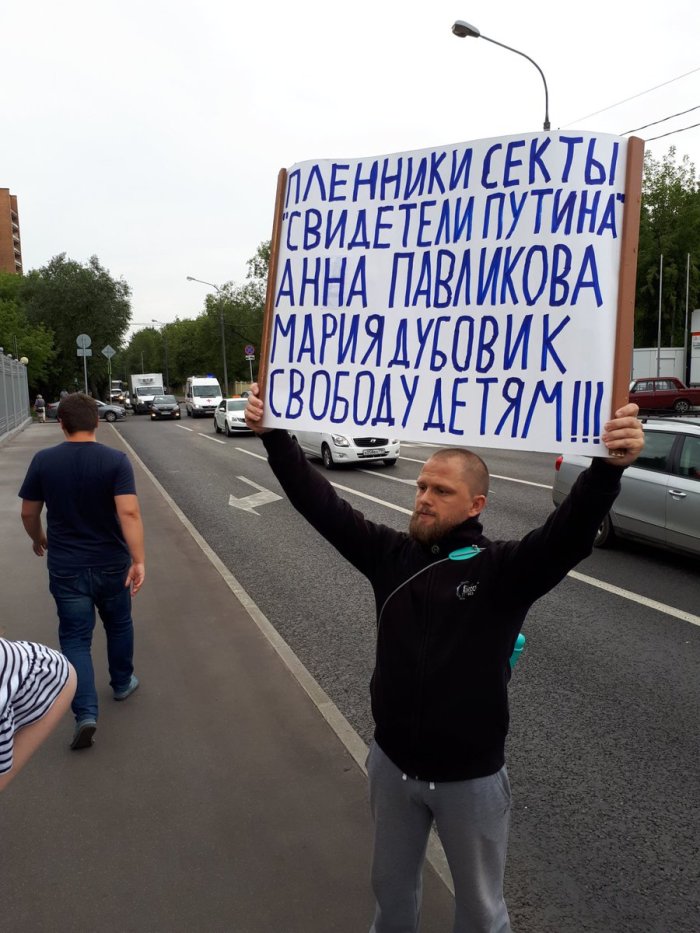 A man picketing outside Moscow City Court, July 26, 2018. His placard reads, “Anna Pavlikova and Maria Dubovik are captives of the cult Putin’s Witnesses. Free the children!” Photo courtesy of Mediazona and Denis Styazhkin

Mediazona reports Pavlikova took part in today’s appeals hearing via video link from the remand prison. In her appeal, defense attorney Olga Karlova had asked the court to rescind the extension of her client’s remand in custody and impose a noncustodial pretrial restraint.

The defense attorney also drew the court’s attention to the fact that four of the people charged in the case are under house arrest, thus violating the principle of equality before the law. Karlova also claimed Pavlikova was not a flight risk, because both her domestic and foreign travel passports had been confiscated.

In May, Karlova had told the lower court her client’s heart problems had worsened in the remand prison. Pavlikova had developed severe tachycardia and cramps in her legs. In June, it transpired she had been transferred to the remand prison’s hospital. In July, Pavlikova was admitted to a civilian hospital for a day to undergo tests.

In May, a hearing to decide whether to extend Pavlikova’s remand in custody took place at the Dorogomilovo District Court. Pavlikova was not taken to the court, but was driven around in a paddy wagon. During the hearing, the judge read aloud parts of the case file  and retired to chambers to make her decision without hearing arguments from the parties to the case. In addition, Pavlikova was not informed of the court hearing. Her lawyer later informed her it had taken place.

In June, the Moscow City Court ruled this was a violation of the procedures for organizing court hearings and returned the case to the lower court.

Ten people have been charged in the New Greatness case. Judging by the case files, New Greatness was an organization established by undercover secret service agents. Six of the suspects are currently in remand prison, while the other four are under house arrest.

All ten suspects have been charged with organizing an “extremist” community (a violation of Russian Criminal Code Article 282.1). However, the prosecution’s case is based on the testimony of three men, none of whom has been arrested. One of them has said he infiltrated the group on the orders of his superiors. The interrogation transcripts of these individuals have mostly been excised from the case files. One of the three individuals drafted the group’s charter, collected money, and rented rooms for meetings.

Law enforcement officers threatened Pavlikova, who was seventeen at the time of her arrest, with violence.