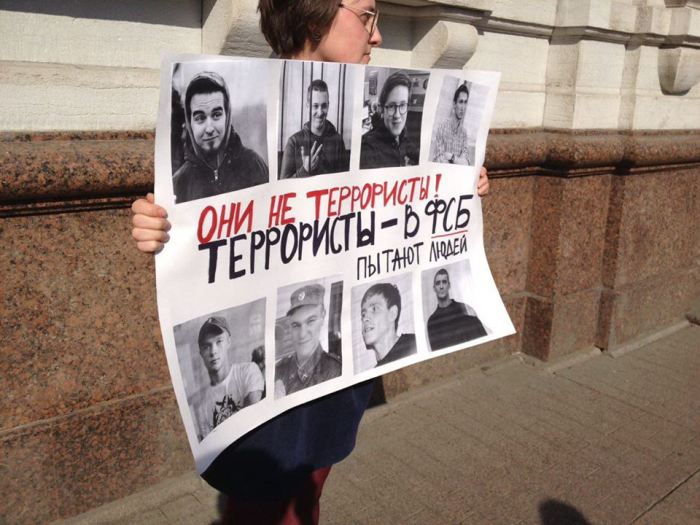 “They are not terrorists! The terrorists at the FSB torture people.” Photo courtesy of St. Petersburg Anarchist Black Cross (@abc.russia.spb)

Today, April 15, a series of solo pickets took place on Nevsky Prospect in St. Petersburg to protest the frame-up of nine anarchists and antifascists, arrested in Petersburg and Penza, and charged with involvement in a “terrorist community” that the Russian security services have dubbed The Network.

Around fifteen activists took part in the pickets and leafletted passersby. The police showed up only when the picketers were rolling up their placards and heading home. The policemen were very sorry they were unable to write down the internal passport info of the picketers.

Many of the passersby who showed an interest in the pickets were informed about the case and sympathized with the arrestees.

On April 11, 2018, yet another Petersburger, Yuli Boyarshinov, was charged with involvement in the so-called terrorist community. He is currently being held in Remand Prison No. 6, located the village of Gorelovo, Leningrad Region. The prison is notorious as a torture chamber. Boyarshinkov is housed in a barracks with as many as one hundred and fifty other inmates, including murderers, rapists, and robbers.

“He has not been tasered, but the conditions in which my client is being held are tantamount to torture,” says his defense attorney, Olga Krivonos.

We demand the authorities close The Network case and release everyone who has been charged in it. We also demand the Russian Federal Security Service (FSB) officers who tortured the arrested men be brought to justice.

On April 14 and 15, Yekaterina Kosarevskaya and Yana Teplitskaya, members of the Petersburg Public Monitoring Commission, were assaulted by reporters from the pro-regime TV channel NTV, who insolently and intrusively asked the women how often they met with foreign diplomats and why they were aiding terrorists. Today as well, an NTV crew ambushed Vitaly Cherkasov, the defense counsel of Viktor Filinkov, a defendant in the case, outside the lawyer’s home and tried to interview him.

We continue to raise money to pay the defense attorneys for their work and pay for care packages for the arrested men.

Thanks to George Losev for the heads-up. Translated by the Russian Reader. If you want to learn more about the Penza-Petersburg “terrorism” case, read the extensive coverage on this website and listen to this interview with a member of the Moscow Anarchist Black Cross, recorded in March on The Final Straw Radio Podcast. Thanks to Ed Sutton for the heads-up.

3 thoughts on ““They Are Not Terrorists! The Terrorists at the FSB Torture People””