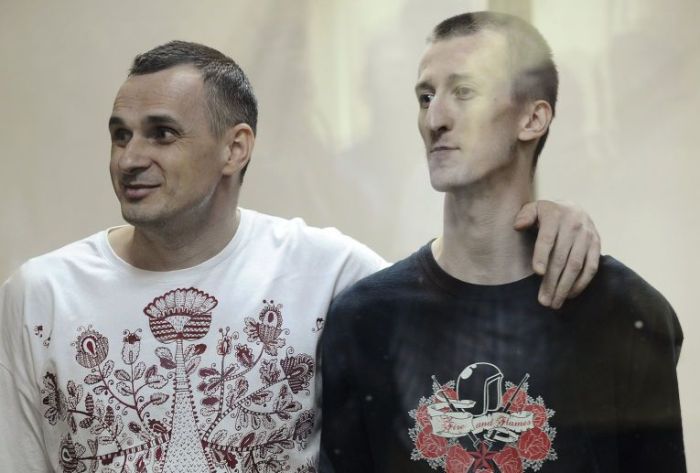 Alexander Kolchenko, Convicted in the Case of the “Crimean Terrorists,” Writes a Letter to Oleg Sentsov
Mediazona
May 22, 2018

Antifascist Alexander Kolchenko, convicted in the Case of the “Crimean Terrorists,” has written a letter to filmmaker Oleg Sentsov, who is in the ninth day of a hunger strike meant to force the Russian authorities to release all Ukrainian political prisoners from the country’s prisons. Mediazona was told about the letter by attorney Svetlana Sidorkina.

According to Sidorkina, Kolchenko was afraid the censor would not pass the letter on to Sentsov, so he gave her a detailed acount of its contents when she visited Kolchenko at Corrective Colony No. 6 in the town of Kopeysk.

“In the letter he wrote that, in his opinion, a hunger strike was an effective means of defense only in cases in which a country valued its reputation. Alexander believes that, in Oleg’s case, Russia could ignore his hunger strike, but not let him die by forcibly feeding and sending him off for a psychiatric examination. Sergei Magnitsky’s death changed nothing in Russia. Instead, the Dima Yaklovev Law was adopted. He did not try and dissuade Oleg, since he knows Oleg is stubborn and does not change his mind. He is quite concerned for his health, since he knows what the climate and living conditions are like in Labytnangi from prisoners he met when he and Oleg were in transit to the prisons where they would serve their sentences. Although Alexander doesn’t agree with Oleg’s method, he respects his stance on freeing Ukrainian political prisoners from Russian prisons and is ready to support Oleg if he needs to,” said Sidorkina.

Sidorkina tried to dissuade Kolchenko from a possible hunger strike by pointing to his health problems and the fact he is underweight. Because of this, he is on a special diet.

Aside from the letter to Sentsov, Kolchenko wrote a letter to Vladimir Putin demanding he intervene in the situation and release Sentsova. Kolchenko, however, was afraid the censor would also prevent the letter from reaching its addressee.

Kolchenko added he had no complaints about conditions in the penal colony. According to Sidorkin, he looked cheerful, but was quite worried about Sentsova. Sidorkina had wanted to show him articles about the Ukrainian filmmaker’s hunger strike, but penal colony staff stopped her from doing so.

In 2015, a court sentenced Kolchenko and Sentsov to ten years and twenty years, respectively, in maximum security penal colonies. According to police investigators, in 2014, Sentsov established a “terrorist community” (illegal under Article 205.4 Part 1 of the Russian Criminal Code). Members of the alleged community supposedly set fire to the doors of the Russian Community of Crimea and the windows of a United Russia Party office. These actions were deemed terrorist attacks, punishable under Article 205 Part 2 Paragraph A of the Criminal Code.

In addition, police investigators insisted members of the alleged “terrorist community” were planning to blow up a monument to Lenin and the Eternal Flame, punishable under Article 30 Part 1 and Article 205 Part 2 Paragraph A. Sentsov was also charged with trafficking in arms and explosives as part of a group, punishable by Article 222 Part 3. Kolchenko was found guilty of involvement in the alleged terrorist community and planning terrorist attacks on the Crimean Peninsula. Both men have denied their guilt.

In the spring of 2016, Sentsov was transported to a penal colony in Yakutia, but in 2017 he was transferred to the White Bear Colony in Labytnangi. In the winter of 2017, the Ukrainian authorities announced they were prepared to exchange Russian prisoners for Sentsov and Kolchenko. On May 14 of this year, Sentsov announced he was going on an indefinite hunger strike to secure the release of all Ukrainian political prisoners in Russia.