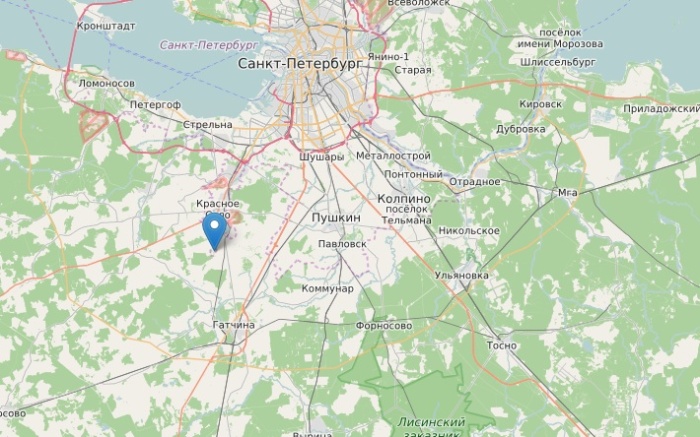 This is Saint Petersburg too, but there is no medical clinic, no pharmacy, no legally operating shops, and no eateries here. The roofs are hastily under repair in time for the elections, but the trash is not hauled away. Fontanka.ru took a look at how this Petersburg gets along.

The letter was an invitation to journey, as the old rubric in the newspapers used to be called. Fontanka.ru got a call from a woman who introduced herself, requested we tell no one she had called, and complained about her unbearable life. She said her life and the lives of her two and a half thousand neighbors were unbearable.

“Just don’t tell anyone I called you,” she repeated, switching to a whisper.

We will honor Nina Petrovna’s request, although I never did figure out whom she was hiding from. (Nina Petrovna is not her real name.) When I came to visit her, when she gave me a tour of her town’s horrors, we were gradually joined by neighbors and even a former municipal councilman who had a roll of glossy paper tucked under his arm. I would nod, rustle my notepad, and feel like a high commission, registering people’s complaints. The procession would expand, and every passerby who did not join it would happily greet us. That is right, they would say, spell them all out in the newspaper. “They” were the authorities who had reduced the whole town to misery. Towards the end, everyone asked me in unison not to identify them.  They had secrecy down pat here. This was not surprising: Khvoyny is the former military garrison town L-237. So Nina Petrovna is a composite character.

Nowadays, the place is an exclave of Petersburg known as Khvoyny (“Coniferous”). Formally part of Petersburg’s outlying Krasnoye Selo district, all the local residents are registered as residents of Petersburg. In practical terms, this village of two and a half thousand residents is stuck between two districts of the surrounding Leningrad Region, Gatchina and Lomonosov. Khvoyny has ceased being a military town, but has still not become a civilian one.

“No one needs us!” Nina Petrovna bitterly informs me. She has spelled out what the trouble is in four words.

Nearly all of Khvoyny’s residents are retired army officers, officers’ wives, and officers’ children. In the early 1960s, they were allocated flats in this spot, which was considered a paradise. There are coniferous trees here, but even more hardwoods. The three-story brick residential buildings are almost in the midst the woods. I arrived here from downtown Petersburg and almost suffered oxygen shock. Here and there, you need to take a forest path to get from one building to another. Since construction of the town was completed in the 1960s, many of the buildings are Stalin-era houses with three-meter-high ceilings. On the upper floors, the ceilings have cracked in places and are covered in mold, because the roofs have not been repaired since the sixties, apparently. But now metallic structures tower next to the buildings: the roofs are rapidly undergoing major repairs.

“Oh, yes,” Nina Petrovna nods. “It was a miracle we were put on the capital renovations program. We have been promised our roofs will be fixed by September 18 [Russian election day this year—TRR].”

Previously, the only way to get into L-237 was through a checkpoint at the invitation of a local resident, but all that remains of the checkpoint are iron gates always left open. Before Nina Petrovna can tell me about the town’s hardships, I notice evenly laid asphalt in the passages between the houses, and cheerful flowerbeds and neat playgrounds in the courtyards. There are even public exercise machines next to the school. So my first impression of Khvoyny is that only profoundly ungrateful and picky people could complain about it.

“You’ve got to be kidding!” says Nina Petrovna, waving her hand. “We planted the flowers ourselves. And our municipal councilman pushed through the playgrounds and the asphalt. What he managed to do when he was on the council is left. But then someone from Krasnoye Selo was elected instead of him. No one deals with our problems anymore.”

We won’t be coming back to how the former municipal councilman “pushed” those things  through. The story looks shady, and the so-called ex-councilman absolutely refused to share the paperwork with us. The problem is that, formally speaking, everything in Khvoyny, including the land, still belongs to the Defense Ministry, and it is not quite clear on what grounds the municipal powers that be were trying to build a garden town, complete with asphalt and exercise machines. But the residents of the former L-237 are terribly worried that the asphalt and the playgrounds and the exercise machines and even the half-repaired roofs will all be taken away. Just as the swimming pool, the bathhouse, the cafeteria, the clinic, the pharmacy, and the shops have already been taken away. Khvoyny once had all these amenities.

“The swimming pool is still there,” Nina Petrovna corrects me. “I don’t know what is in there now, but the military garrison has put it under guard, and someone stops by there from time to time.”

The medical clinic is also still standing. I am led there as if it were a local landmark.

“It used to be a hospital branch,” Nina Petrovna says. “It had everything: an X-ray machine, a lab, and complete staff of doctors. You could undergo physiotherapy here.”

The door has been wide open for many years, and you can walk in. Chair legs covered with a layer of dust lie in the hallways. Books are strewn about, and computer debris crunches underfoot. When the military moved out, it looks as if they did all they could to make sure the enemy would not get their hands on these precious things. The stench testifies to the fact the building is now used as a public toilet.

The “outpatient clinic” is a minivan. The doctors sees patients right in the van. The patients queue up outside the van.

“If it’s raining, we stand under umbrellas,” sighs Nina Petrovna. “Can you imagine what it’s like in winter?”

Once, she tells me, a neighbor summoned an ambulance from Krasnoye Selo. It arrived the next day.

Another building the residents of Khvoyny like to show off is the former cafeteria. The military, apparently, retreated from this building in keeping with all the regulations, trashing everything they could not take with them. The cafeteria’s doors are securely locked, so visitors get in by climbing through a shattered window.

A wise man once conversed with the people via a TV screen. A old man complained to him about awful roads, roads on which it was impossible to drive a car. The wise man’s reply was reasonable. Why, he said, do you need a car if there are no roads? It is the same thing with the residents of Khvoyny. They don’t have a pharmacy, but why do they need a pharmacy if they don’t have a medical clinic, either?

“People who have cars are alright,” sighs Nina Petrovna. “But it’s so much trouble going by bus every time to buy medications.”

But residents have to take the bus in any case because neither are there any shops in Khvoyny. There is a building in town. The sign on it says, “Store.” The windows are boarded up.

“People from one of the big retailers came here, either Pyatyorochka or Magnit,” Nina Petrovna repeats a rumor. “The military demanded such high rent they left as soon as they arrived!”

This story of how the military “demanded” high rent conceals, apparently, the reason why there no shops and no pharmacy in Khvoyny. All the buildings are still the property of the Defense Ministry. Local residents assure me the process of transferring them to the city has been going on for fifteen years or so. The ex-councilman, mentioned earlier, knows something about this, but once again he does not want to show me the paperwork. He says the problem will be resolved quite soon.

For now, though, anyone who wants to open a shop or pharmacy in Khvoyny has to contact the military about the rent. Apparently, such people do reach out to them. And certain people seemingly manage to luck out and agree on the rent. Products are sold in a cubbyhole in the boarded-up store. In a kiosk on the next street over, an enterprising fellow sells milk, bread, vodka, sausages, and other edibles that he ships in from Petersburg. An old woman bakes him pasties to sell. So the kiosk doubles, as it were, as a “branch” of the former cafeteria. All these businesses seem to have settled with the military on terms that are not suitable for large retail chains and even less so for pharmacies. But quality control of the products is as reliable as can be. It is implemented not by some consumer watchdog agency, but by the consumers themselves. If push comes to shove, they can beat up the retailers.

Another sight to see in Khvoyny is the rubbish dump on the outskirts of town. There used to be a path here that people took when going shopping in the neighboring village of Taitsy. When the dump appeared, they had to alter their route, because the dumpsters are hauled away, at best, on the eve of big holidays, and the perpetual puddle near the dump is so large that, at all other times, residents have to toss their rubbish into dumpster from a distance of three meters. You can see, however, that accuracy is not the principal virtue of Khvoyny’s residents. 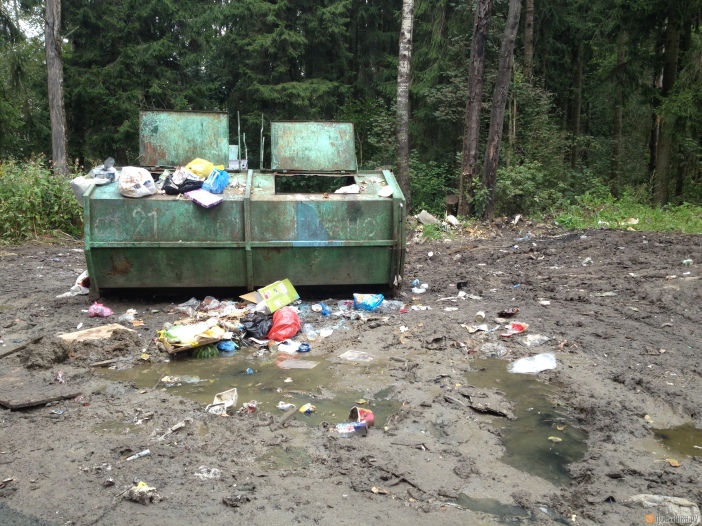 If you think the military are so ruthless only to the civilian population, think again. This accusation completely falls away when you see their own dormitory. It is inhabited by those in Khvoyny who do not have their own flats. The garrison continues to operate, and despite the peacetime conversion I have described, the garrison’s current headquarters is still located in the town. Soldiers and officers assigned to the garrison are housed in the dormitory as well. If you are lucky, the ceiling in your room will leak only in one spot. At most, you will need to put two buckets on the floor to catch the water. And it is not so terrible there is one toilet per floor. As we recall, the former medical clinic functions as a public toilet.

My tour of Khvoyny lasted three hours. During those three hours, the hard lives of Khvoyny’s residents and the total neglect they suffer at the hands of the powers that be filled me with compassion for them. We said our goodbyes next to an imported car with a plush toy dog in the back window. A St. George’s Ribbon was tied round the doggy’s neck. Before leaving, I decided to have a look at the glossy scroll the ex-councilman had been carrying throughout my tour. It turned out to be a campaign poster for country’s main political party. He had to hang it on wall to do his part for the campaign. I asked the residents of Khvoyny whether they were going to vote for this party. 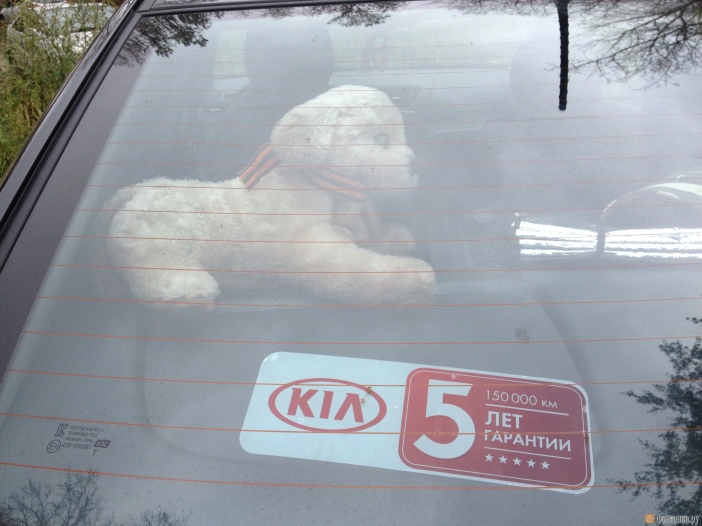 “Of course!” said Nina Petrovna firmly, her lips pursed. “I don’t see an alternative. Otherwise, there will be war. The country will divided up, and the Americans will grab all our riches.”

I left town with a feeling of joy. It was a good thing, after all, the residents of Khvoyny would be hanging on to their riches.

All photos by Irina Tumakova. Map images courtesy of OpenStreetMap and Google Maps. Translated by the Russian Reader. Thanks to Comrade VZ for the heads-up