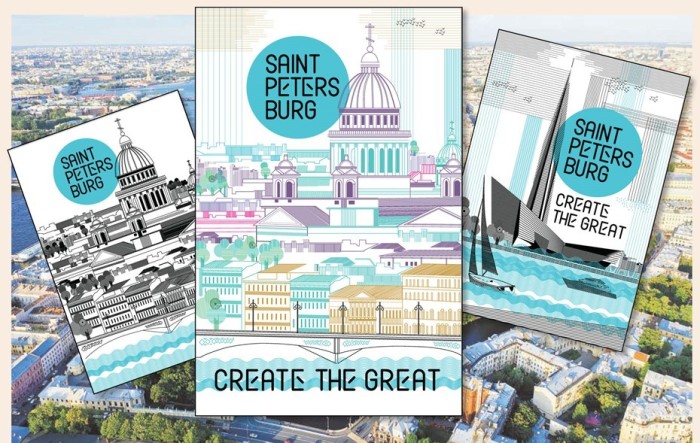 The Sun of Our Ambitions: What Petersburg’s New Logo Tells Us
Mikhail Shevchuk
Republic
November 15, 2019

Petersburg just got a brand or, more precisely, a meta brand, a broader concept than a mere agglomeration of icons and symbols. It is, rather, a conceptual encapsulation of the region that reflects its attractive features. What has attracted the most attention, however, is the new brand’s logo: a turquoise-colored circle, inscribed with the words “Saint Petersburg,” in which the crossbars of the e’s have been raised to evoke associations with the city’s drawbridges.

“It is the cold turquoise-colored northern sun that always shines, both in winter and summer,” explained Andrei Barannikov, CEO of SPN Communications, which worked on the project. It symbolizes “faith in breakthroughs and faith in insights.”

Naturally, social networks were immediately flooded with criticism because the project was allocated 7 billion rubles [approx. 99 million euros] in municipal funds and took nearly a year to complete. Many people thought spending that kind of money on a “turquoise-colored circle” was laughable.

There is no point in arguing with them. Apparently, they are the same people who think they could have painted the Black Square as easily as Malevich, and that an aristocratic coat of arms would make the best logo. A brand’s value does not lie in a combination of lines and colors, however, but in its semantic content. This is what we should discuss.

The slogan “Create the Great,” proposed as part of the branding campaign, is obviously supposed to generate associations between Petersburg and its founder, Peter the Great. A draft version of logo, leaked on the internet before the project was completed, featured a picture of Peter the Great adorning the selfsame turquoise-colored circle. It is a good thing this was not the final version: national heroes are usually not well recognized abroad. Perhaps the Americans can permit themselves this sort of thing because their national hero, George Washington, is known by everyone due to the dollar bill, and maybe the same applies to the British and Queen Elizabeth, but hardly anyone would recognize, say, Garibaldi or Atatürk unless they were identified in a caption.

“Petersburg is a city of ideas and concepts. The city on the Neva is imagined as a place that has been created and continues to be created by outstanding people, as well as a place that creates such people, that enables individuals to realize themselves, to achieve the most ambitious goals,” Barannikov said.

“Creating the great” is, in fact, a difficult task, if only because it is not entirely clear what counts as greatness in this case. Someone’s ambitions might extend no farther than repairing roads and screwing new knobs on the doors of kindergartens. The conservative system of values that guided Soviet leaders usually situated “greatness” in the creation of massive buildings and facilities, places that could be seen and touched. Real proof of the people and state’s limitless possibilities was embodied in this materialism.

The immaterial notion of greatness mainly boiled down to great feats, achievements, exploits, and deeds, that is, to surmounting external obstacles through superhuman effort. Major things achieved at the behest of the big bosses and involving colossal work and sacrificed lives were thus regarded as truly great.

It seems this paradigm still dominates Petersburg, which is unsurprising, of course, if you know anything about the lives of its current leaders, including Petersburg Governor Alexander Beglov. On the posters, which show the things the brand can do, we see the building of the Stock Exchange, St. Isaac’s Cathedral, and Gazprom’s Lakhta Center skyscraper—that is, architectural edifices, depicted strictly and schematically, and almost in monochrome. 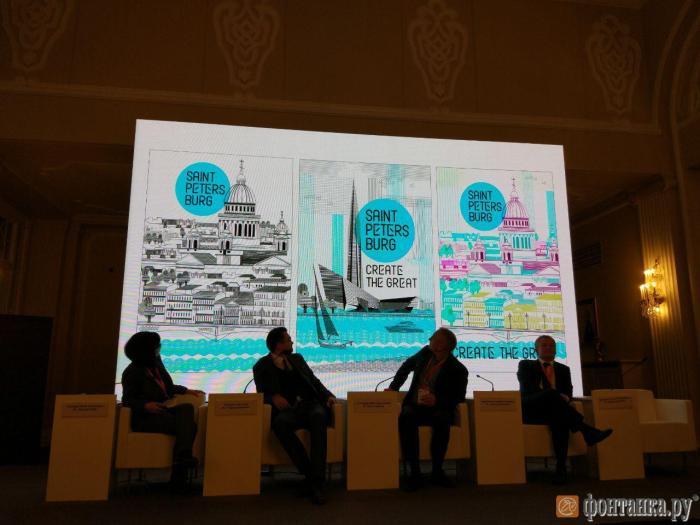 There are no people whatsoever on the new promotional posters, and no fashionable flowery frivolity or asymmetry, either. “Creating the great” must be done in a grave, business-like manner, by the book and after the fashion. There is no place here for DIY, for you cannot erect a massive stone edifice using DIY methods.

Petersburg  has a particular canon of values, which are invoked by all local politicians without exception if they have any hope of attaining high office in the city. These include the city’s scientific and industrial potential, its advantageous geographical placement in terms of trade and transportation routes, its status as Russia’s maritime capital, and its cultural heritage. No one ever deviates from this canon, but it seemingly sets the framework for “creating the great”: Petersburg has wharves and factories, but it has no way of transforming itself into an IT hub or a major university town. Discrete achievements are doable, but they do not gel into a coherent picture. For the authorities, growing the city’s cultural potential means holding the annual city-sponsored cultural forum and, in the public space, organizing military parades and religious processions. This is the same old imperial style.

It would be stupid to present highways, train stations, and even skyscrapers, which are a dime a dozen in places like Kuala Lumpur, as examples of “greatness.” The current Petersburg authorities are much more inclined to focus on opening new kindergartens and procuring new buses. These are definitely good causes, but they can hardly be called “great,” unless, of course, we embrace a system of values in which launching a new commuter train is considered a great achievement.

If we give credence to Barannikov’s argument that a great city is a place that enables people to achieve ambitious goals, today the surest way to achieve such goals is as a government official, and Putin and his team are thus the ideal symbols of self-realization. In a monochrome bureaucratic state, the main ambition is to climb as high as possible on the bureaucratic career ladder.

In the outside world, a picture of Putin would probably be more recognizable than Catherine the Great’s profile. The only problem is that Putin’s achievements have mainly occurred since he left his hometown and moved to Moscow, so it would be more appropriate to adorn the city’s promotional posters with pictures of the Sapsan high-speed train that shuttles between Petersburg and Moscow.

Translated by the Russian Reader. Image courtesy of Delovoi Peterburg and Fontanka.ru