Two Russian nationals, previously detained by Libyan authorities, have been jailed at Mitiga Prison in the suburbs of Tripoli, according to Alexander Malkevich, president of the National Values Defense Fund [sic], as reported to TASS.

Malkevich confirmed that two Russian nationals, sociologist [sic] Maxim Shugaley and interpreter Samer Hasan Ali, who is a  dual Russian-Jordanian national, had been jailed. There were a total of three people in their research group [sic]. Malkevich also claimed fund staff members had not meddled in election campaigns in Libya. Their work was limited to monitoring the situation there.

The Russia-based National Values Defense Fund (FZNTs) reported on July 5 that their staff members had been detained in Libya. It claimed they had only been carrying out sociological surveys and researching humanitarian, cultural, and political conditions in Libya.

According to Bloomberg, the Russian nationals were detained in May of this year. In particular, two of them had arranged a meeting with Saif al-Islam, son of former Libyan leader Muammar Gaddafi. Saif al-Islam is considered a possible Libyan presidential candidate.

As noted in a letter sent by the Libyan Prosecutor’s Office to PNE [sic], the information found on laptops and flash drives confiscated from the detainees proved both of them worked for a company “specializing in meddling in the elections scheduled in several African countries,” including Libya. The prosecutor’s office also noted a third Russian national had managed to leave Libya before the special services arrested the men.

Thanks to Grigorii Golosov for the heads-up. Translated by the Russian Reader 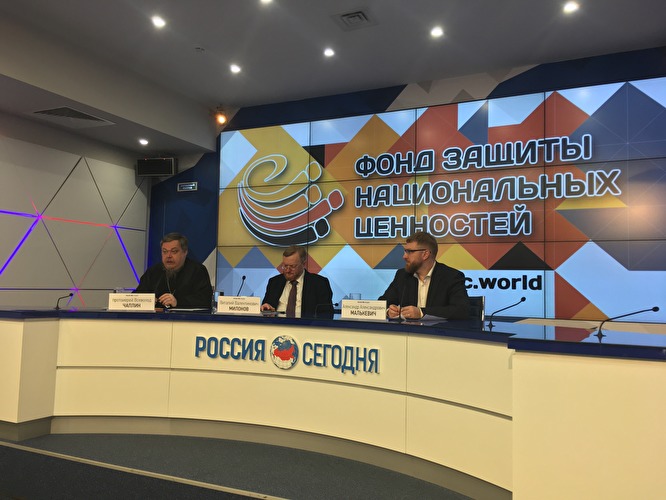 As for the National Values Defense Fund, which sent a poor spin doctor (identified as a “sociologist”) to Libya, it is a new project, obviously run by [Yevgeny] Prigozhin. Its website makes it clear it is going to defend Russian national values primarily in Africa.

You can read more about the project here.

So be it. China also has interests in Africa. They are backed by colossal investments that are gradually exchanged for political influence. This happens really slowly because the Africans are quite touchy about it: Chinese influence makes people unhappy. But the investments it makes go a long way toward containing the unhappiness.

Russia has taken a different route. It helps its cause to educate African army officers at the relevant Russian universities, but that is a long-term deal. The powers that be want things to happen quickly, hence the appearance on the continent of mercenaries [like Prigozhin’s Wagner Group—TRR] and spin doctors to aid dictators in fixing their so-called elections and squashing protests through trickery.

In other words, the Chinese approach involves spending money now to obtain influence later, while the Russian approach involves trying to gain influence now in order to make money later. I don’t need to tell you there is no better way to make “Russia” a swear word in Africa and elsewhere, and all Russian nationals into automatic personae non gratae.

Our current rulers will surely take pride in the fact they managed to make as many countries and regions as possible hate Russia. This how they imagine defending national values.

Thanks to Louis Proyect for the link to the article about Jane Goodall’s campaign against Chinese influence in Africa. Translated by the Russian Reader