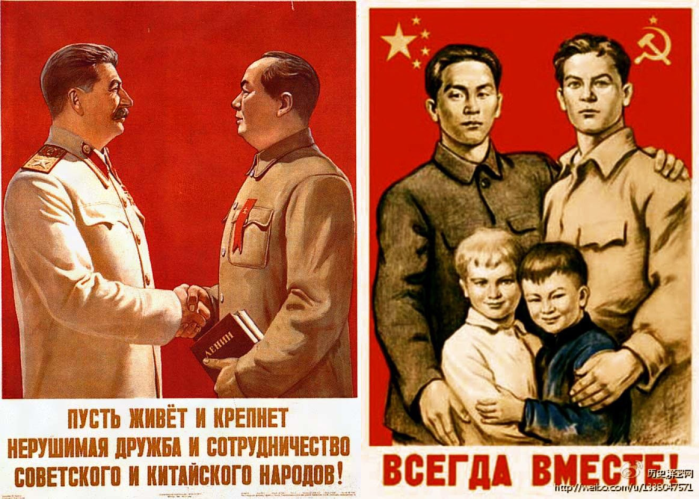 “May the unbreakable friendship and cooperation of the Soviet and Chinese peoples flourish and strengthen!  // Always together!” Images courtesy of quora.com

If you are suffering from a post-National Unity Day hangover, the cure might be a little dose of Sino-Soviet friendship, as provided by Alexei Volin, Russia’s deputy communications minister.

There are lots of funny things in Russian officialdom’s latest rant against the evil west, not the least of which is the revival of the perennial cognitive disorder known as Sino-Russian friendship. I could be wrong, but Russia has as many good reasons not to cooperate with China and slavishly emulate its “success” as it does to turn around and run hard in the other direction.

This is not to mention the withering hatred of the Chinese among a good number of ordinary Russians, a hatred you can witness up close by reading the horrifying things Petersburg tour guides say, and Petersburg magazines and newspapers write about the Chinese tourists on which the city’s tourist economy has become increasingly dependent.

Finally, there is the nonsense, touted by Deputy Minister Volin, about the alleged lack of “alternative” social networks in Russia. Could it be that the good deputy doesn’t know the Russian government stole VK from its founder, Pavel Durov, just so it could have a social network its secret services surveil at will? Is it any coincidence that almost all of the utterly ordinary people the Russian security forces have lately charged with posting or, more often, reposting, “extremist” online have been caught doing it on VK? Hence, Facebook’s stable popularity and Telegram’s growing popularity among social and political activists, and people who merely want a safe space to say to other people what they think. {TRR}

“If Twitter, YouTube or Facebook continue down the path of throwing Russian and Chinese media out of their environment, we will have no choice but to create new distribution channels, and to think about alternative social networks and instant messaging services. Although we really hope it does not come to this, we certainly should be ready for it,” said Volin.

Volin made this statement during the Fourth China-Russia Media Forum, in Shangai. According to Volin, Russia and China should develop means aimed “not at discriminating against mass media from neighboring countries, but aimed at delivering our viewpoint and our content to other regions and other people.”

Earlier, Volin said the authorities would eventually have to give up banning information, since such methods were becoming ineffective.

“Sooner or later, they will have to be abandoned, because more and more people are getting around them without even noticing they are dealing with technology allowing them to bypass [sic] blocked content,” he said.

As examples of ineffective blocking, Volin cited the instant messaging services Telegram and WhatsApp, which operate in China despite being officially banned.

Telegram was banned in Russia in April 2018 by decision of the Tagansky District Court in Moscow. The ruling was based on Telegram’s refusal to hand over the [nonexistent] keys for decrypting correspondence among its users to the Russian Federal Security Service (FSB). Despite the ban, most Russian users have continued to have access to Telegram.