It’s impossible for non-Russians to live in the Russian Federation. They should leave the country. I know it’s complicated, but it’s more complicated than burying your children or having to nurse them back to health like this.

I know from my own experience. I’ve heard my fill of stories.

The harder life becomes in Russia, the tougher people will be on non-Russians. The blame here lies not with young, uneducated morons from troubled families, but with the ideologues of neo-Nazism and nationalism. And maybe the Kremlin will pick up the topic again when it needs to look for “enemies.” 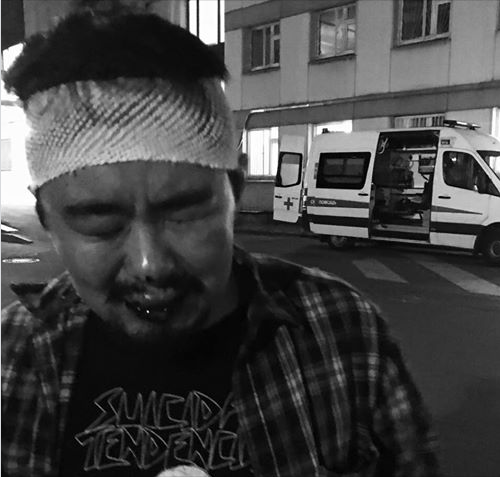 My nephew was beaten up on Sunday evening, just for the heck of it. Or, rather, not just for the heck of it, but because of his narrow eyes and the color of his skin. We spent all night at the hospital. The examination was brief, but the doctors said they had to wait another two to four days to be sure of the final diagnosis. My nephew’s left eye hurts, and he cannot open it. You can see for yourself.

Something similar happened to another nephew of mine around fifteen years ago, when he was in his sixth year at the Sechenov Medical Academy in Moscow. We had been returning from a concert by the beloved People’s Artist and singer Lyudmila Zykina, a concert to which she had invited us.

We took different trains in the subway. The boy was dozing in the train, his eyes half closed, when suddenly a boot smashed into his face with savage force. Although my nephew was a boxer, there was nothing he could do against a two-meter-tall, thickheaded lout. The result was a broken jaw, being fed through a tube for three months, and having to prepare for his thesis defense. The boy lost forty kilos.

How are non-Russians supposed to go on living?

Photo courtesy of Elena Zaharova and Svetlana Choyzhinimayeva. Translated by the Russian Reader