The Partisans of Suna
Karelian pensioners have gone into the woods to save a pine forest from logging
Alexei Vladimirov
Fontanka.ru
October 26, 2016

Residents of the small village of Suna in Karelia’s Kondopoga District, mainly pensioners, have rebelled against the authorities, loggers, and a mining company that plans to develop a sand and gravel quarry in the scenic pine wood alongside their village. The area resembles the front lines during a war. The loggers have brought in their equipment, but have been stopped in their tracks by the pensioners, who have set up camp there. The pensioners have been keeping a 24-hour vigil in the woods for four months. Local journalists have dubbed them the “partisans of Suna.”

“Extremist” Pensioners
The conflict flared up much earlier. Saturn Nordstroy, a company specializing in the development of sand and gravel beds in Karelia, had its eye on a plot of land in the vicinity of Suna and decided to open a sand quarry there. The Karelian Nature Management and Ecology Ministry supported the idea. Permissions were received, an auction was held, and the company was awarded a license in 2011 to extract sand and gravel at the site for a period of twenty years. However, neither the officials nor the businessmen suspected they would encounter vigorous resistance from local residents, mainly pensioners, who have strongly opposed the quarry development plan and exercised their inalienable right to a decent life.

There is a pine forest on the site where the businessmen have decided to dig the quarry, the only one in the whole area, a place where the locals harvest berries, mushrooms, and medicinal herbs. The wild plants are a good supplement to their tiny pensions. Once upon a time, the village of Suna was known throughout the Soviet Union for the nearby poultry farm, also called Suna. The farm was considered one of the best in the country, but in the “fat years” of the noughties, it was shut down. This has meant a slow death for the surrounding settlements. Young people have left the area in search of work, while the old people have stayed in the village to live out their lives. The money to index their pensions could not be found, but the prime minister has told them to “hang on.”

The locals learned a quarry would be dug near their village only at the presentation of the development plan. Opponents of the logging of Suna Forest planned to hold a people’s assembly on May 14, but they were forced to abandon the idea. On the eve of the assembly, police visited one resident of Suna, pensioner Nina Shalayeva. According to the elderly woman, the police all but accused her of extremism.

In the autumn of last year, the Center for Extremism Prevention (Center “E”) began investigating the pensioners. One of them had rashly said it would be a good idea to block the Kola Federal Highway, which runs from St. Petersburg to Murmansk, since the village is located a kilometer and a half from the highway. That would get Moscow’s attention right away. Naturally, someone snitched to the proper authorities. Law enforcement and the secret services reacted instantly. The settlements along the Kola Highway were mobbed with large numbers of law enforcement officers, from riot police to the highway patrol. To stop the protest rally in its tracks, the pensioners were threatened with criminal charges for extremism.

“The deputy head of the Kondopoga police was polite. He gave me a warning for extremism and left. I had run into him in the spring, when I had also been accused of organizing an unsanctioned rally. The local beat cop said they had learned we were planning to block the highway, and that I was organizing the whole thing. What kind of organizer am I? There was also an FSB officer from Kondopoga. He asked to talk with me privately. He said flat out that they had specially trained people who did not like to be bothered. They would arrive, break all of us, and imprison us, despite our age,” recounted Nina Shalayeva, an anti-quarry activist.

Then the villagers suddenly had a bit of luck. In the spring of 2015, scientists from Petrozavodsk State University discovered a valuable species of lichen in the Suna Forest, Lobaria pulmonaria. It is listed in the Red Book of Russia as an endangered species: destroying species listed in the Red Book is not only forbidden by law, but is even considered a criminal offense. The scientists’ find occasioned an inspection by the prosecutor’s office in the area of the planned digging. Consequently, the Karelian Interdistrict Environmental Prosecutor’s Office issued a warning to the director of Saturn Nordstroi about the inadmissibility of violating the law while extracting sand and gravel from the South Suna Quarry. The pensioners now had grounds to sue.

Litigation
The plaintiffs demanded “the license issued to Saturn Nordstroy LLC be terminated and the company prohibited from engaging in all exploratory and economic activity that may lead to the destruction of protected plant species and their habitat in the pine forest near the village.” In April of this year, the Petrozavodsk City Court partly granted the claim lodged by the residents of Suna. The company was forbidden from carrying out exploratory and other work detrimental to endangered species discovered in the forest. However, the court could find no grounds for terminating the license for subsoil extraction issued to the company.

However, the Karelian Supreme Court has overturned the Petrozavodsk City Court’s ruling. The case is currently under investigation by the Russian Supreme Court. The pensioners think the case will be heard in December or thereabouts.

The Partisans of Suna
Immediately after the Karelian Supreme Court’s ruling, logging equipment was moved into Suna Forest. People formed a human shield to block the road to the loggers. The whole village came running to see what the noise and fracas were about. The villagers told police, businessmen, and officials of various ranks they would not surrender the forest: they would have to chop them down with it. Arriving on the scene, the police warned the pensioners they would be forced to detain them if they did not leave the logging site, because they were interfering with the work of the loggers. The pensioners set up camp and kicked off a round-the-clock vigil in the forest. 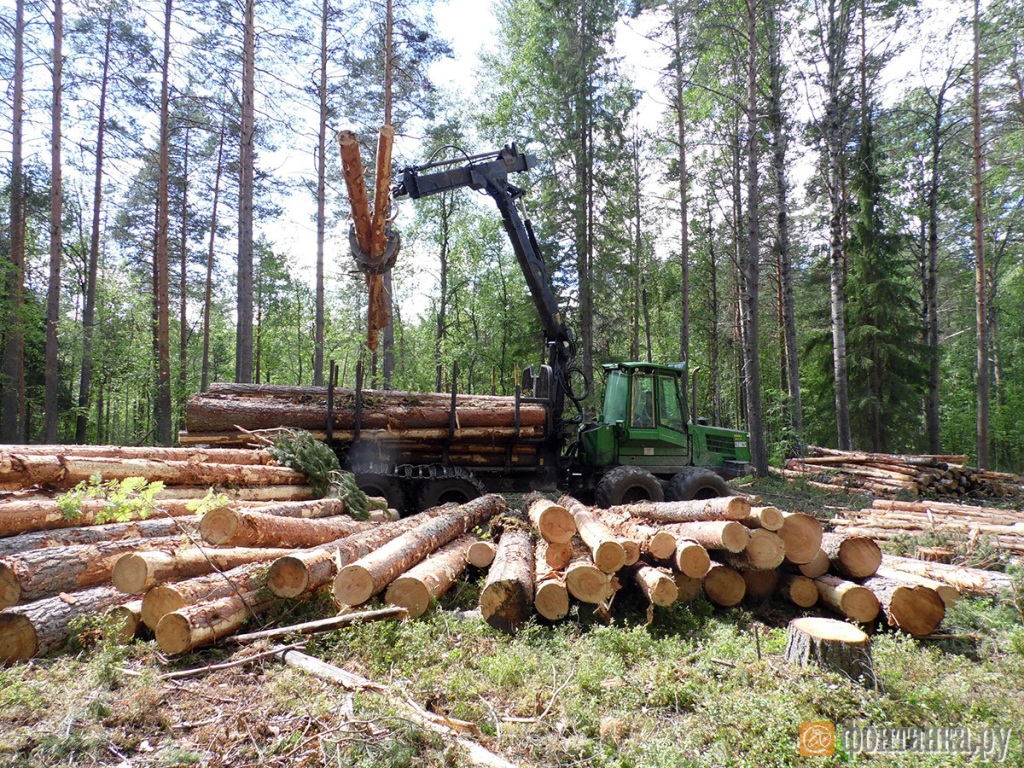 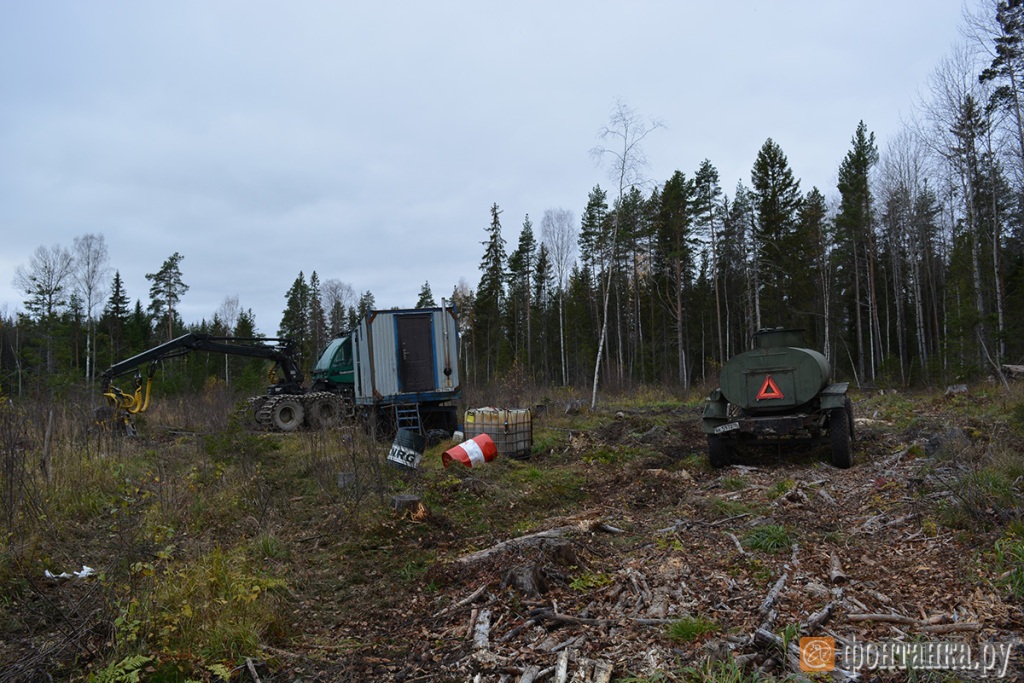 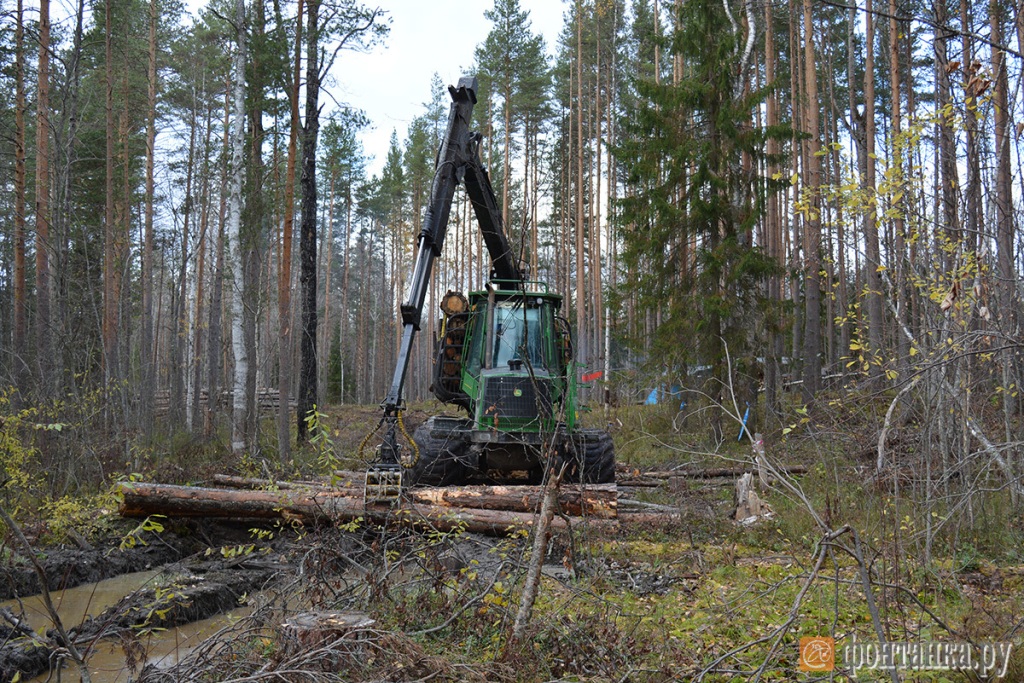 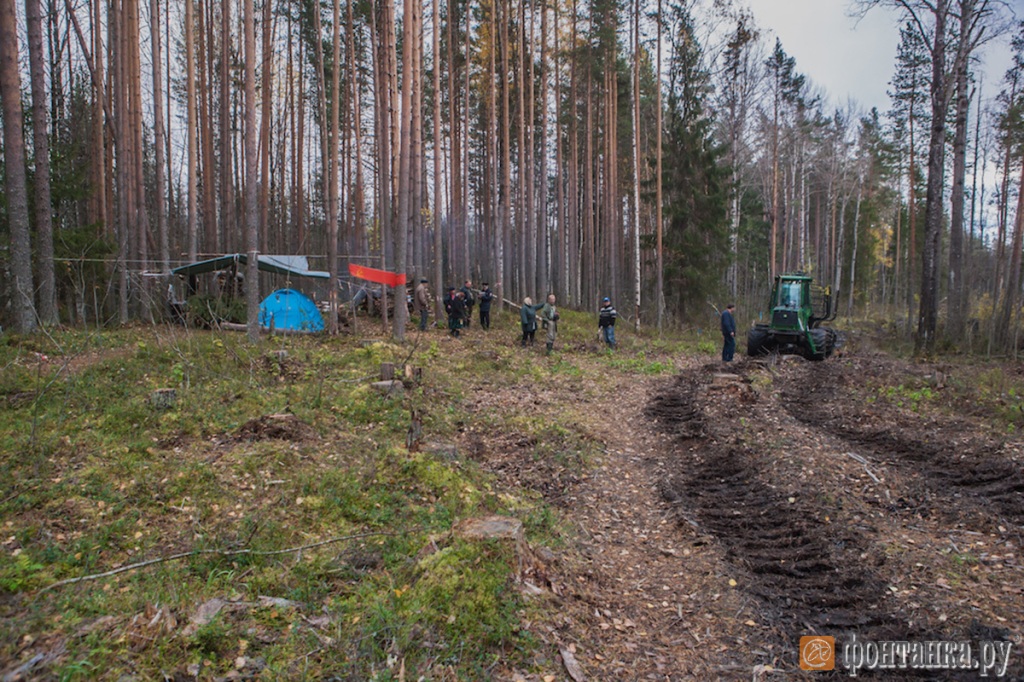 “Medvedev said we had to be patient. We are patient. Just don’t take away the last thing we have! I don’t know what price we’ll have to pay, but we are not going to give up this forest, because we won’t survive without it. The [Karelian] Supreme Court’s ruling made us sad. However, it is only the latest step in the case, albeit one not in our favor at the moment. We will defend our rights!” said pensioner Tatyana Romakhina.

The logging equipment retreated, and a “pre-election” calm set in until October 7.

On the morning of October 7, the engines of the forestry equipment could again be heard droning in Suna Forest. The first on the scene was Nina Shalyaeva. She stopped the harvester.

“When I went to my shift in the forest, I saw that a harvester was running. I stood in front of their equipment and said that my fellow villagers would be right behind me, and we wouldn’t let them cut down the trees. They promised the police would come and take me to Petrozavodsk. However, after we talked, they stopped logging and drove off the lot,” said Shalyaeva.

Karelia’s Suna Forest has become something like Khimki Forest. District police officer Vitaly Ivanov, summoned by the loggers, interviewed the locals, wrote down their internal passport data, and said that if the actions of the loggers were ruled legal, the defenders of Suna Forest who impeded the logging would be forcibly removed from the allotment. In turn, the pensioners promised the entire village would rise in rebellion. The loggers conversed with the pensioners rather unceremoniously. They demanded to see papers [prohibiting them from doing their work] and told them in harsh tones to go back to the village. Everyone’s nerves were on edge. The loggers were irritated by the annoying, unplanned downtime, while the pensioners were annoyed by police’s actions. They could not understand why the police had asked them to produce their passports, written down the information in them, and tried to drive them out of the woods. In the end, the loggers retreated. Fortunately, things did not come to blows. 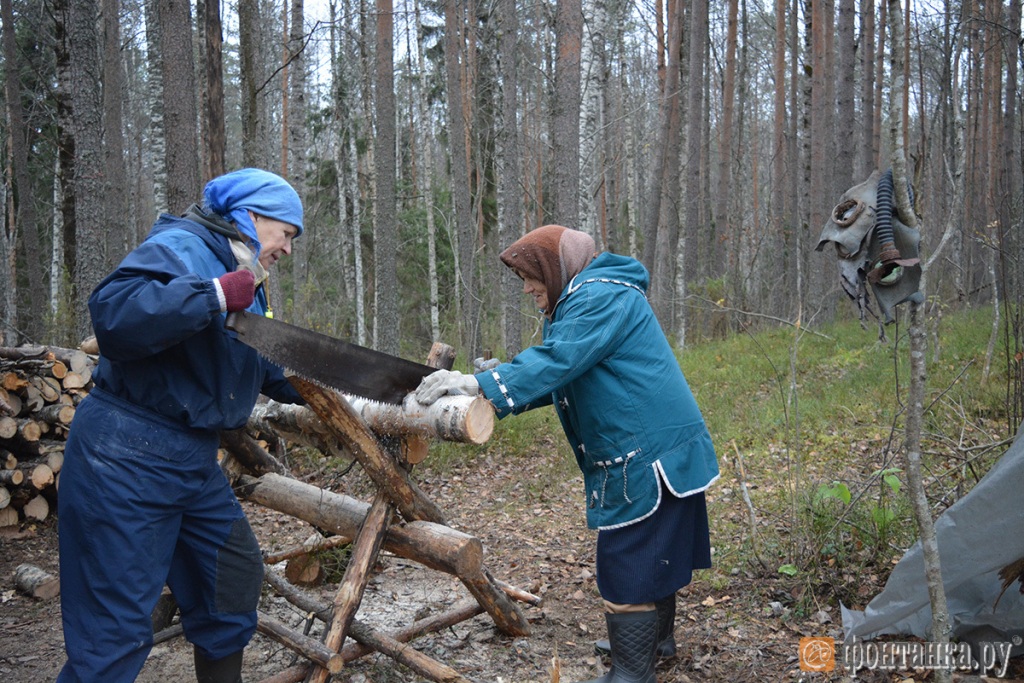 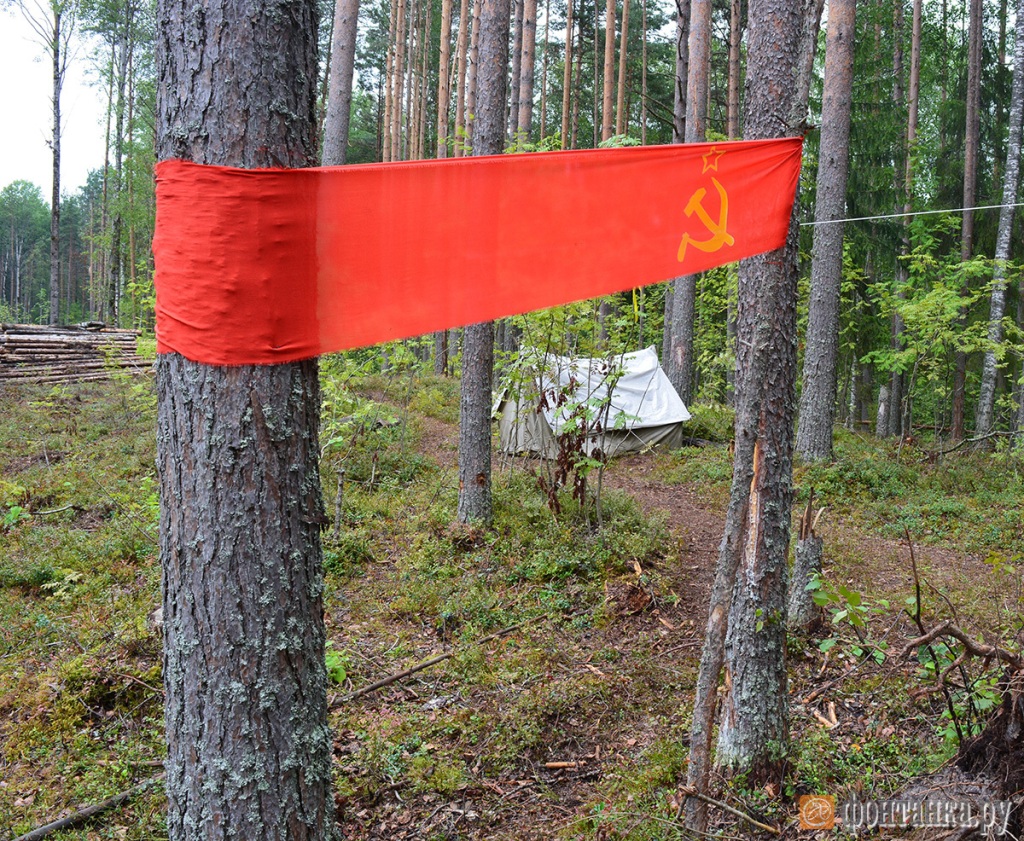 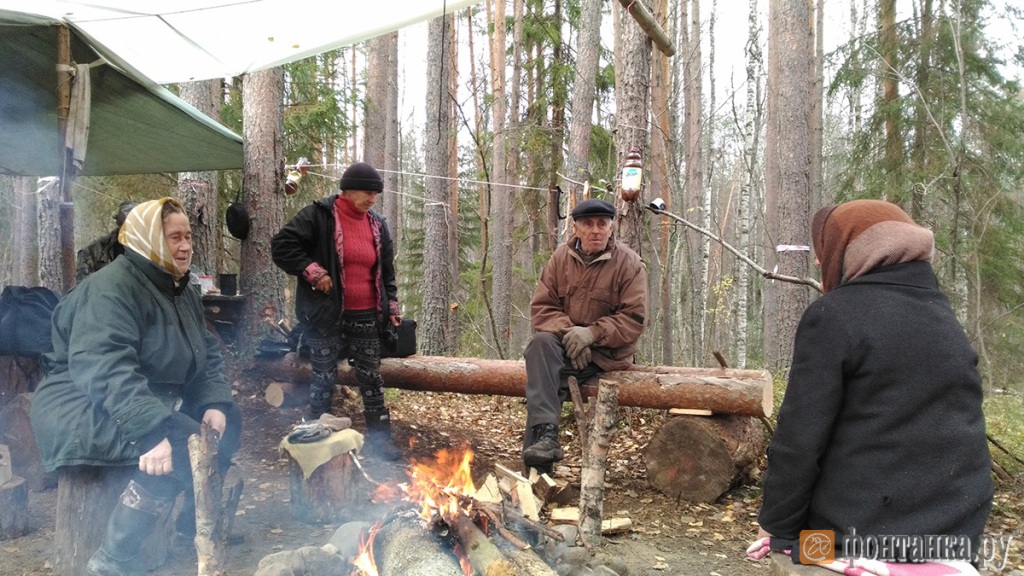 Meanwhile, the controversy over the forest has spread beyond Karelia. Major publications and national TV channels have covered the “partisans of Suna.” In Petrozavodsk, a grassroots movement has been organized to help the pensioners. Young people have begun standing watch in the woods along with the old people. Residents of Murmansk Region have sent them a winter-proof tent.

The pensioners are still on watch in the woods and getting ready for winter, while officials and businessmen are looking for ways to resolve the conflict.

An “Artificially Simulated” Conflict?
After a long silence, the Government of Karelia finally organized a round table on the issue. Officials believe the controversy surrounding the Suna Forest has been “artificially simulated.”

“We organized a meeting to discuss the situation with the development of a sand and gravel quarry in the South Suna subsoil resources allotment, and the reasons why the license holder has been hindered from engaging in legal activities, and to work out a solution to the conflict that has emerged.  A situation around Suna Forest really has emerged, and it is our job to figure what caused this artificially simulated social conflict. I would like to draw the attention to the people involved in the process that the question of the legality of the license holder’s activities has been considered in court, and the rulings, which have entered into force, were in their favor. Multiple studies have not established evidence that endangered plant species are being destroyed. Thus, the license holder has all legal grounds to engage in their business activities,” Alexei Pavlov, first deputy minister for nature management and ecology in Karelia, said at the outset of the round table.

Igor Fedotov, director of Saturn Nordstroy LLC, was of the same opinion.

“Everything is too seriously organized. When we presented the project in Yanishpole in May of last year, the experts told us someone was stage-managing this drama. Everyone accuses me of wanting to come in, dig everything up, destroy everything, and do nothing [for the area]. So let me do something. I want to do something good for Suna. I can donate the material I am going to be extracting. The district needs it: they do not have good sand. I can help out the local council, which is gasping for breath, just like every district in Karelia. We are building a road to the quarry, and it will still be there [after we are gone]. I am not planning to build anything there. The local residents will be the better for it. And the reforestation of the area will begin,” said Fedotov.

No decisions were made at the round table, however. Talks have been rescheduled for October 26.

All photos courtesy of Alexei Vladimirov and Fontanka.ru. Translated by the Russian Reader. Thanks to Comrade VZ for the heads-up