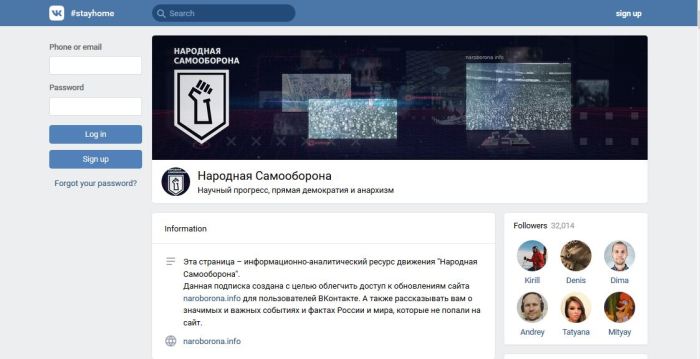 A screenshot of the Popular Self-Defense movement’s page on the VK social network. If you’re in Russia, you should think twice about reposting anything the PSD posts about suicide bomber Mikhail Zhlobitsky. Otherwise, masked men might break down your door, as just happened to Lyudmila Stech in Kaliningrad.

In Kaliningrad, masked security forces officers broke into the apartment of a local resident, Lyudmila Stech, and conducted a search. As transpired, she is suspected of publicly exonerating terrorism because of a post on a social network. The incident was reported to Novyi Kaliningrad by a friend of the Kaliningrad woman.

“They broke into her apartment at 6 a.m. today. First they knocked on the door and said they were from Rospotrebnadzor [the Russian federal consumer watchdog]. When Lyudmila didn’t open it, they broke the window,” our source said.

According to the source, the search of Lyudmila Stech’s apartment lasted about four hours. Stech’s router and mobile phone were confiscated, and then Sech herself was taken away for questioning. By evening, she had been released on her own recognizance. She was informed that she was suspected of committing a crime under Article 205.2 of the Russian Federal Criminal Code (public calls to carry out terrorist activities; public exoneration or promotion of terrorism) due to a post on the Russian social network Vkontakte (VK).

“No copies of the documents that she was forced to sign were given to her. She received only a certificate for work, ” says the suspect’s friend.

Novyi Kaliningrad has learned that the Kaliningrad women has been charged over an incident in October 2019 in which she allegedly reposted a post, published on the group page of the Popular Self-Defense (Narodnaya Samooborona) dealing with 17-year-old anarchist Mikhail Zhlobitsky, who in 2018 set off a bomb in the building of the Federal Security Service (FSB) building in Arkhangelsk, killing himself and [injuring] three FSB employees.

Kaliningrad has already seen a similar case. In the fall of 2018, FSB officers detained Kaliningrad resident Vyacheslav Lukichev. According to investigators, the antifascist had posted a text on the Telegram channel Prometheus that called anarcho-communist Zhlobitsky’s deed “heroic.” Lukichev admitted during the investigation and during the trial that it was he who had published the post on the Telegram channel, but he argued that the content of the text had been incorrectly interpreted. In March 2019, Lukichev was found guilty of vindicating terrorism, under Article 205.2.2 of the criminal code, and fined 300,000 rubles [approx. 4,066 euros at the then-current exchange rate].

Thanks to Novaya Gazeta for the heads-up. Lyudmila Stech is the latest in a growing list of Russians prosecuted or facing prosecution for allegedly “exonerating” the suicide bomber Mikhail Zhlobitsky on social media or in the traditional media. Stech has joined the ranks of Ivan Lyubshin, Svetlana Prokopieva, Anton Ammosov, Pavel Zlomnov, Nadezhda Romasenko, Alexander Dovydenko, Galina Gorina, Alexander Sokolov, Yekaterina Muranova, 15-year-old Moscow schoolboy Kirill, and Vyacheslav Lukichev. On March 5, OVD Info reported that Oleg Nemtsev, a trucker in Arkhangelsk Region, had been charged with the same “crime.” Translated by the Russian Reader