I don’t know what else to do on May 1 when LGBT people in Chechnya are facing flagrant genocide, so today this was how it went down. Now we have been detained and taken to the 43rd police precinct. A man who came out bearing a placard that read, “Putin, go away. Putin is evil” was detained with us. It’s forbidden to say that now, too. 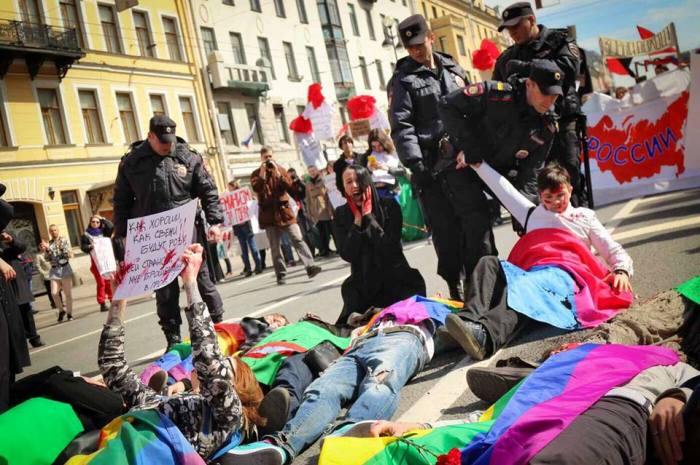 On May 1, 2017, activists staged a performance on Nevsky Prospect, the city’s main boulevard, during which Chechen mothers mourned and sprinkled their children with earth. Prone on the ground, the bodies of the LGBT people were covered with rainbow and Chechen flags. The performance was meant to express solidarity with the people of the Republic of Chechnya as well as draw attention to the horrifying events occurring there now. 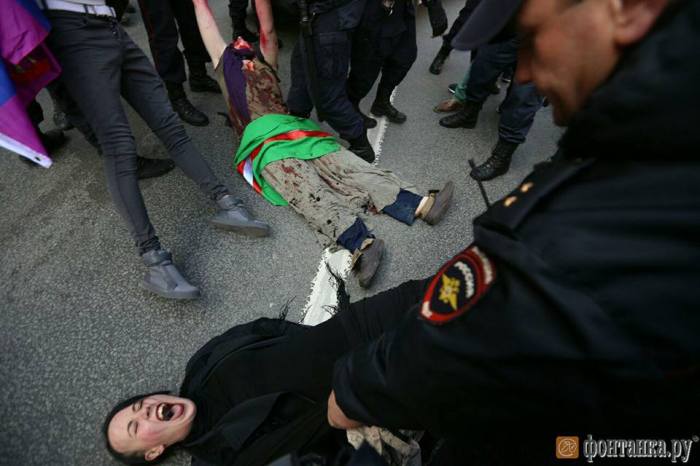 Since the beginning of the year in Chechnya, which is part of Russia, there have been numerous illegal detentions, torture, and executions of homosexual men, including men deemed homosexual. We know of hundred of victims, dozens of them murdered. Even as they deny the occurrence of genocide, local officials have publicly justified these atrocities by citing medieval “ethnic traditions” and “Muslim values.” 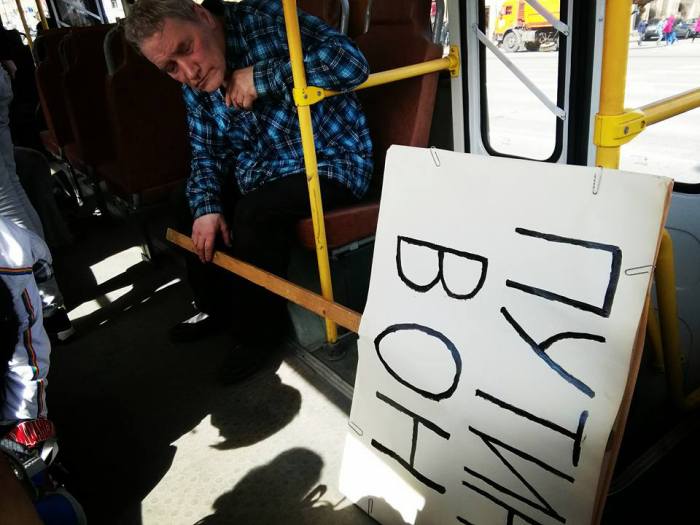 The persecution of LGBT people in Chechnya and the North Caucasus is nothing new. The region has long been plagued by rampant corruption, violence, and murder, affecting everyone who lives there. However, targeted mass killings are a new phenomenon. Both local and federal authorities are to blame for the state terror. On the one hand, they have vigorously popularized “traditional religious values.” On the other, they have proved incapable of opposing the spread of radical Islam and ensuring the enforcement of the Russian Constitution and human rights. Impunity on the ground encourages terrorism and radicalization, leading to the deaths of civilians not only in Chechnya but outside its borders. Consequently, terrorists exploded a bomb in the Petersburg subway for the first time in the city’s history.*

“Cruelty is a severe infection that is prone to pandemic. It is not a one-off event. They started with the people of Chechnya and, although many imagined that would be the end of it, they continued with ‘their own kind,’ as is now the ‘patriotic’ expression,” wrote Anna Politkovskaya. 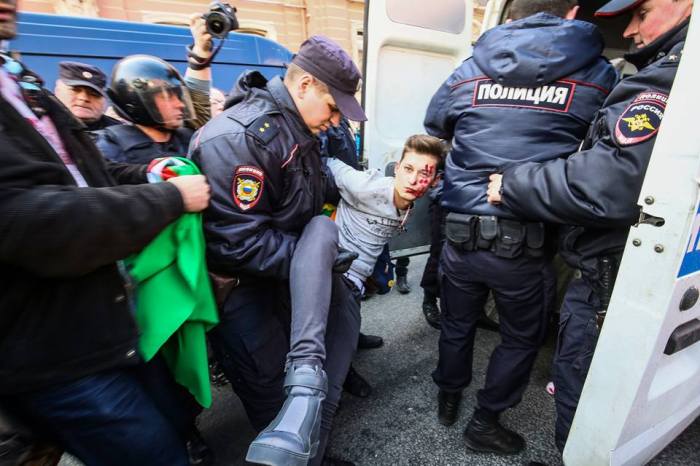 We demand the strict observance of Russian federal laws in Chechnya and preservation of the Russian state’s secular nature. We demand that religious fanatics who are calling for violence be punished according to the law. We demand an investigation of allegations of widespread torture and executions of gays in Chechnya and severe punishment for the guilty parties, including government officials.

Photographs by David Frenkel, Alexandra Polukeyeva, and Fontanka.ru. Translated by the Russian Reader

* NB. I have translated and posted the above out of a sense of solidarity and friendship with the people who staged this action during today’s May Day marches on the Nevsky in Petersburg.

However, I would be remiss not to note the striking Alexei Navalny-like anti-Caucasus/anti-Muslim rhetoric in the protesters’ communique, which, of course, is not unique to the otherwise admirable anti-corruption fighter, but is a commonplace in the non-thinking of many “ethnic” Russians. As thoroughly deplorable and despicable as the persecution of gay men in Chechnya and anywhere else is (what, are gay men not persecuted in “Russia proper”?), the activists quote the slain journalist and human rights activist Anna Politkovskaya while seemingly forgetting why she was assassinated: because she wrote truthfully about what Russian federal armed forces and police were doing in Chechnya. Moscow’s successive bloody invasions of Chechnya in the 1990s and the 2000s, involving the torture and rape of non-combatants, the wholesale slaughter of civilians, and mass displacement of the local populace might seem to be more appropriately described by the word “genocide” than what has been happening recently to the republic’s gay men, however horrifying. Not to put too fine a point on it, “Russians proper,” with the notable exception of Politkovskaya and a brave but tiny minority of others, have never been able to assign the responsibility for what happened in Chechnya where it belongs, and they have been aided and abetted by the other “world powers” (i.e., the “former” colonial and imperial powers), who were only too happy to turn a blind eye to what first Yeltsin and then Putin were up to in their own backyard, so to speak. If Chechnya is now an out-of-control autocracy, run by an “Islamist” strongman-cum-madman, Russians have only to look in the mirror to find out who is to blame for this deplorable state of affairs.

Nor, finally, is it a given that the recent bombing in the Petersburg subway (which wasn’t even the first such bombing, in fact) was the work of “radicalized Islamists.” Of course, that is one possibility. But there are other possibilities, as any “Russian proper” who hasn’t had his or her memory erased would realize.

When the St. Petersburg Legislative Assembly passed its infamous homophobic law several years ago, there was no popular outcry against the law on the part of Petersburgers, the vast majority of whom are not Muslim and thus cannot be suspected of adhering to “medieval Muslim values.” Nobody but a handful of people “rioted” in the streets, and as far as I can tell, Petersburgers still, inexplicably, regard themselves proudly as “Europeans,” although they have this disgusting “medieval” law on the books, and many of the same local Petersburg riot cops (OMON) who wearily drag them into paddy wagons and kettle them when they occasionally want to exercise their constitutional rights to freedom of speech and assembly were, as is well known, on active combat duty in Chechnya during the First and Second Chechen Wars and are, possibly, guilty of God knows what war crimes against the “uncivilized” Chechens, whose tiny, beautiful corner of the world has been ravaged at least three times in living memory by their Great Russian rulers. TRR