This morning I got an urgent message from a friend, alerting me to the fact a funny sounding exhibition of photographs was underway at a downtown photo gallery I had never heard of.

It was true, as my friend pointed out, that the announcement for the show, an exhibition of portraits of Eastern Ukrainian pro-Russian separatist fighters (opolchentsy), taken by Petersburg photographer Mikhail Domozhilov, sounded quite dicey politically, as posted on the website of the exhibiting gallery, ARTOFFOTO.

It sounded a little less outwardly partisan when translated into English and printed on the flyers I would later find lying on a windowsill in the gallery:

“The self-proclaimed and still unrecognized state [of the] Donetsk People’s Republic appeared as a result of a civil war in Ukraine in April, 2014. The Donbass People’s Militia became the driving force of the new republic. In the year that passed after the declaration of the DPR, its militia transformed from an anarchic group of super activists [sic] divided into small groups and willing to go weaponless and die for an idea into a regular army with all its necessary attributes—[a] code [of military conduct], subdivisions [sic] and their chiefs, headquarters and machinery.

“This episode is about transition and transformation, about a shaky equilibrium between belonging to one country and to another, utopic in its essence. And also about the self-identification of the participants throughout the conflict. In several months former miners, builders, mechanics have become professional warriors, and a new, extreme reality has replaced the ordinary one. With major destruction[], artillery shelling and [a] non-continuous front, these people suddenly found themselves in the middle of historical events and news reports.

“This episode includes several close-up portraits of militia members in mobile studios at military and training bases, as well as on [the] frontlines.”

It was also true that the photographer, Mr. Domozhilov, had shown a penchant in his career for subjects that might be characterized as rightist, such as this fascinating series on the ultras for Petersburg’s Russian Premier League side, FC Zenit.

The ultras series featured virtuosic albeit historically and aesthetically coded works such as this.

On the other hand, Mr. Domozhilov’s tearsheets included portraits, just as compelling, of pro-Ukrainian fighters on the Maidan in Kyiv.

But I did not think it fair to pronounce judgement on the work on the basis of a couple of websites, so I set off into the winter wonderland that Petrograd has become in the last week to see the show for myself.

As I crossed the Fontanka, I saw what has become a rare scene in recent years, what with the onset of warm, mostly snowless winters: people frolicking on the frozen inner-city river. 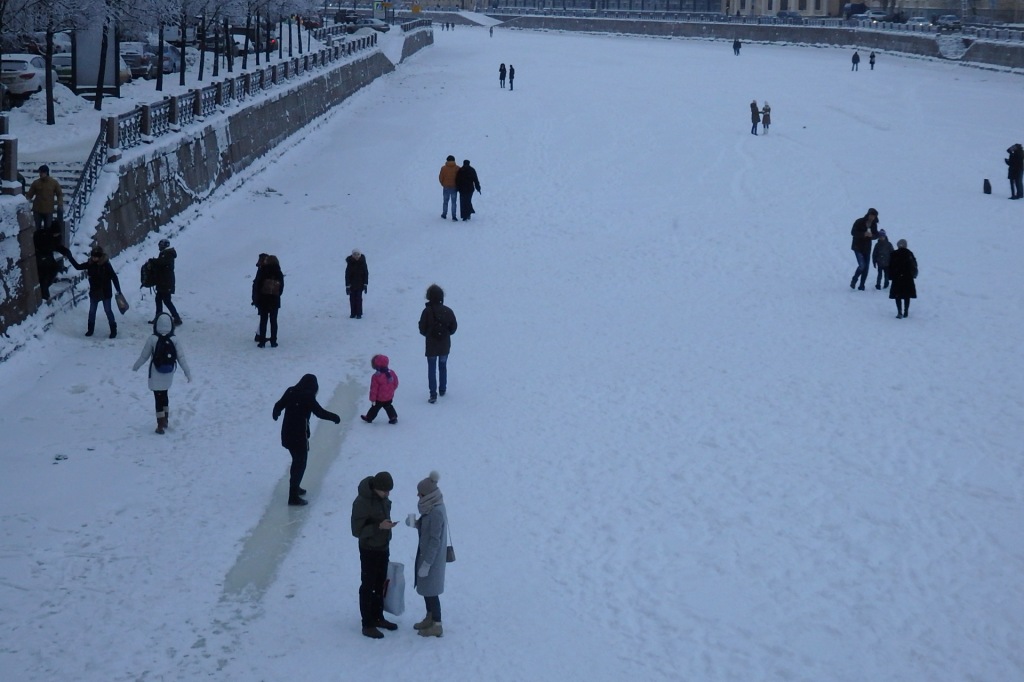 As I got closer to the gallery, I came across a hoarding for a cinematic ideological mash-up involving Whites and Reds, set in Perm in 1918 during the Russian Civil War.

The trailer to the film produces even more despair than the poster.

I am afraid this is a sign of things to come for the upcoming hundredth anniversaries of the February and October Revolutions in 2017, unless an actual revolution—or total societal breakdown—ensues then, which is not altogether unlikely.

A happily car-free Malaya Konyushennaya, a street reconstructed in the nineties as a pedestrian zone but more recently chockablock with cars as a makeshift carpark, was piled with snowdrifts, which at least one little tykestress was enjoying with her dad.

I went through the big inner courtyard connecting Malaya Konyushennaya to its longer cousin, Bolshaya Konyushennaya, where I was immediately reminded of how precipitously the Russian economy has been tanking over the past year.

I was also confronted with a traffic sign, advertising a restaurant a kilometer straight ahead, that seemed to have been aspired by Rob Reiner’s character in the beloved American seventies sitcom All in the Family.

In a couple minutes’ time I was inside the gallery. I mentioned to the young fellows minding it that I had never heard of it before. They explained they had only opened this past summer.

They graciously allowed me to take snapshots of the exquisitely mounted show.

Each of the sitters in the portraits was identified only their by his or her combat nickname and battalion. (Many of them were from the Imperial and Viking Battalions, and the Miners Division.) 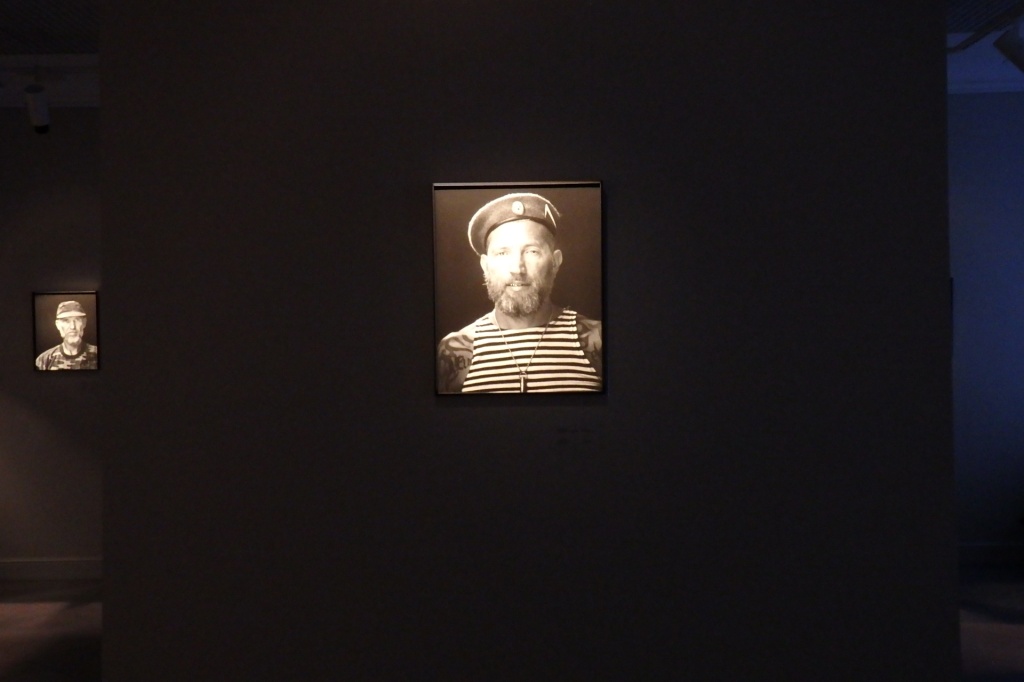 I left the gallery stunned. Although I imagine the photographer and I are firmly on opposite sides of the ideological divide, the photographs are gorgeous, not least because, as another friend who responded to these snapshots wrote, “The faces speak for themselves.” And since they do that, I would argue, they stop functioning as propaganda, whatever the intentions of the photographer and his sitters, which obviously are heavily tainted in that hagiographical direction.

Nevertheless, I was glad to gaze at the snow-and-frost-enhanced inner Petrograd cityscape as I made my way home so I could think less about the exhibition and what it meant.

When I left the gallery and crossed the street I was immediately reminded of a less obvious “civil war” that has been going on here for the past decade among so-called developers, city officials, the city’s nominally UNESCO-protected built heritage, and the handfuls of people who have been defending it.

This sign informs us that the Imperial Court Stables Office (Konyushennoe vedomstvo), a protected landmark if ever there was one, was to be transformed into a “hotel complex” by the final quarter of 2015. Last year, however, the city took the property back from the well-connected Zingarevich brothers, claiming the landmark would be reconstructed as a cultural venue.

Now the site is surrounded by a fence, which made the walk along the Moika Embankment and back toward the Fontanka and my own neighborhood a slightly cramped proposition.

Fortunately, the frozen Moika was also teeming with human life, as well as familiar and mysterious sights along its embankments. 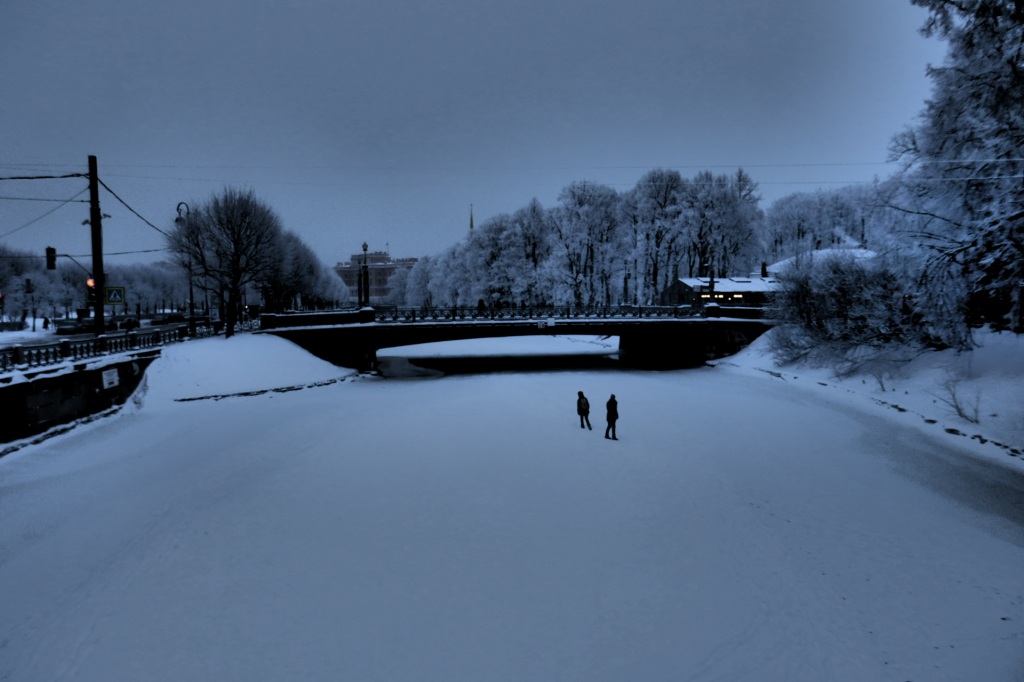 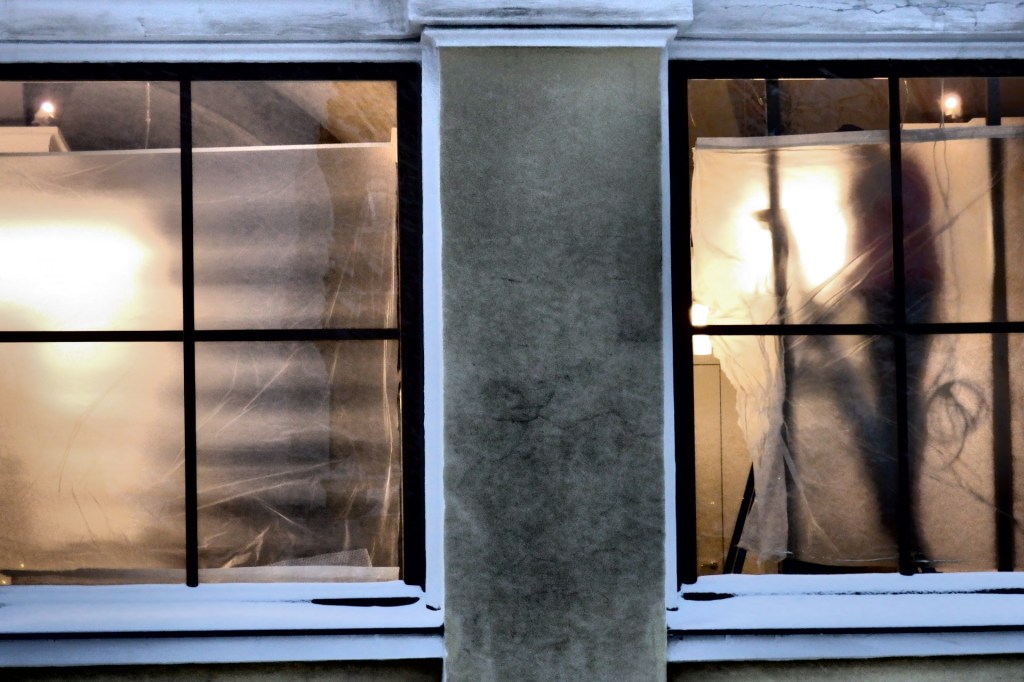 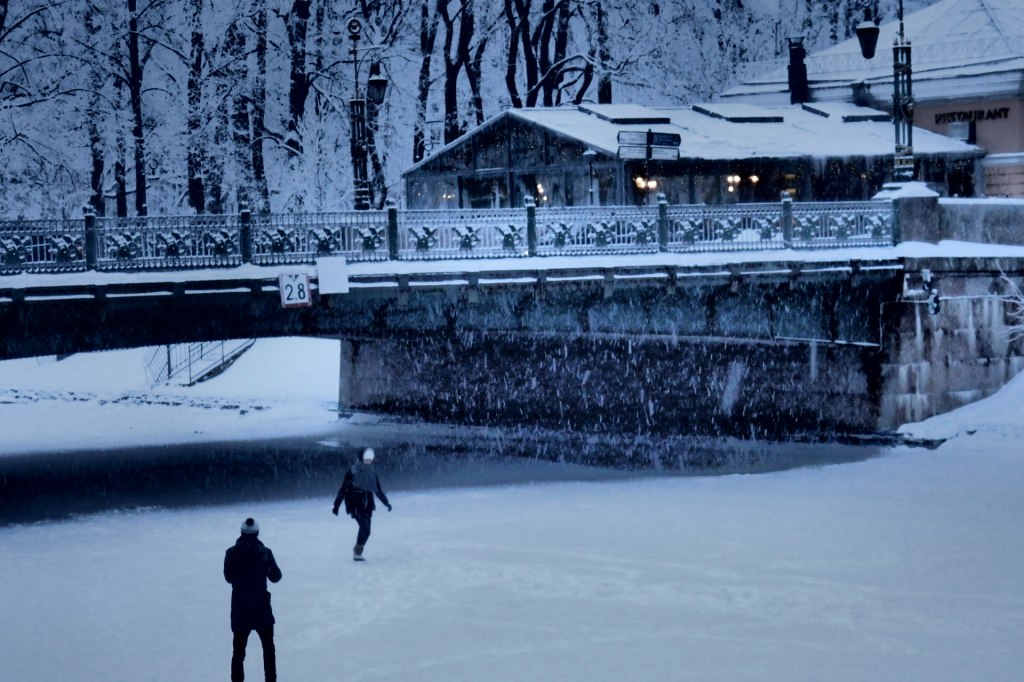 Another thing the inner city has been awash with in the past years, in the absence of a coherent state policy, are hectoring public service advertisements enjoining Petersburgers to keep to the straight and narrow and lead vaguely “family values”-oriented lifestyles.

Nice sentiments, but who needs them when the economy is nosediving, a North Caucausian warlord has been promising, while employing Stalinesque rhetoric, to make short work of Putin’s enemies, and all the blowback caused by the armed takeovers of Crimea and Eastern Ukraine by the “utopic super activists” (to invoke the photographer’s coinage) has not been dealt with at all, but only exacerbated.

When I got back to the Fontanka I found a pleasantly empty vista, 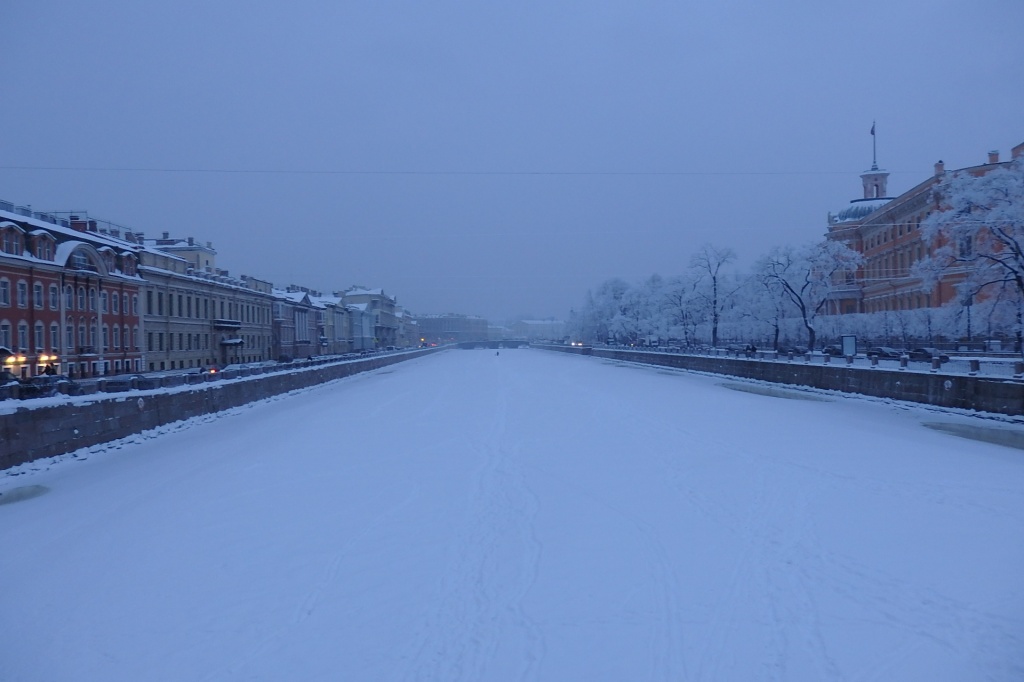 enlivened only by the sight of two young people trying to pole their way upriver.

As I got closer to home, I was tempted to dive into the “Duck” Bar;

informed, right when I least wanted to hear it, that spring would soon be on its way; 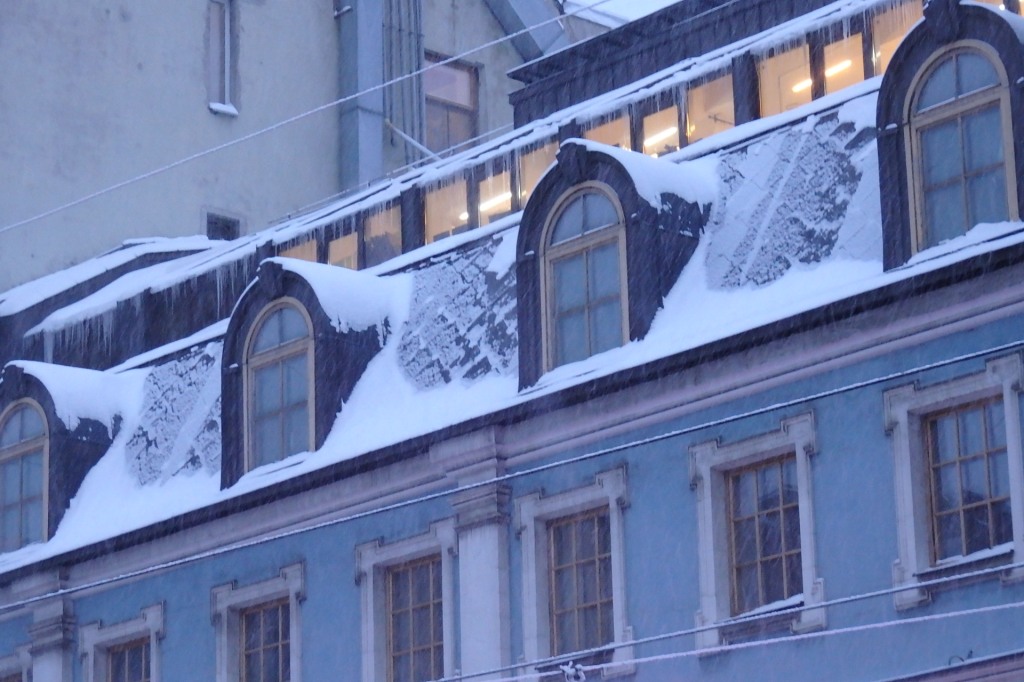 reminded that “historic preservation” Petrograd style often means plopping illegal mansard roofs on top of eighteenth-century buildings for the benefit of the nouveaux riches and lawless;

and invited to tour a “House of Horrors” by a man dressed as a giant bee. These sorts of attractions, as well as various “quest rooms,” have in the past year become all the rage among entrepreneurs trying to fill empty commercial properties with semi-liquid businesses. Or with anything at all.

As I made my way down Pushkinskaya Street, an angry-looking, snow-encrusted Alexander Pushkin

cast a long shadow on the square and the street that bears his name.

It was too fine and rare a winter day to complain, but I will anyway.

After finally returning home and drinking a cup of cocoa, I posted on Facebook the pictures I had taken at the Ukrainian separatists exhibition. With one and a half exceptions, none of my friends wanted to look at them, much less acknowledge them. But lots of people liked the photo of the “Duck” Bar.

I will not draw any big conclusions because I have long known that people here, much like people in other powerful and criminal countries, are seeking an escape from the dark, snowballing mess they have wrought, a mess that will come crashing down on them sooner than they imagine. (Although many of them imagine it vividly, I know.) But God has mercy on us and some days lets us imagine He is in His heavens and all is right with the world.

All photos by the Russian Reader

UPDATE. Not that my readers are so lacking in savvy, but since this essay has already been republished on the website of an Alexander Dugin supporter, and Alexander Dugin is a genuine fascist, it might bear remembering that the “anarchic group of super activists” building “utopia” in the Donbas have never, ever been going it alone. They have had lots of help from the “eastern neighbor” as the Finns euphemistically call Russia.