“And now, the newlyweds can seal their union with a kiss.”

Lyosha and I had long ago stopped listening to the young woman from the registry office and were already sealing our union.

I reluctantly let go of Lyosha’s hands so he could hug my parents and his parents. Our mothers were hiding faces moist with tears behind bouquets.

“Let’s leave the young people alone for a few minutes.”

Everyone left, closing the transparent door of the room where prisoners meet with lawyers. The guard peeked shyly through the glass, and the smell of fresh bread wafted in from the corridor: there is bakery on the first floor of Butyrka prison.

We didn’t talk much. We cuddled each other and winced at every rustle, afraid the guard would come in to take my husband away.

I clung to Lyosha as if it would slow down time.

“What should I do tonight when I leave and you stay here? How should I finish this day?”

I had been tormented by this question since we had set the date for the wedding.

“Go out with someone, but if you’re tired, go home to the cat.”

“You all ordered me a festive meal, so I’m going to eat.”

There was a guilty knock at the door. A prison officer informed us our time was running out.

“When we get out of prison—I mean, when I get out—I will hold you for days on end.”

I cried and buried my head in Lyosha’s shoulder. My husband had been calm all this time.

“My heart is going to leap from chest now,” he suddenly said.

We embraced our parents and the staff from the Public Oversight Commission who had come to the jail to congratulate us. Thanks to them we have photos of the wedding ceremony. Lyosha was being led away—without handcuffs, but under guard.

Now I was going to leave the place, but Lyosha was staying here. A chill emanated from the walls, and behind me countless doors slammed shut. The sound was like the sound of a guillotine’s blade falling.

Now I was going to get out of there and bawl. I would not go out with anyone. I would not go home to the cat. I would sit down on the steps of the remand prison. Better yet, I would lie down on the steps, and I would wallow there until they let Lyosha go. The leaves would fall from the trees, then it would snow, then it would melt, and the branches on the trees would bud, but I would still be lying there, because my life was over.

Everything turned out exactly the opposite. Rather than lying down and dying, I came to life. Despite the period of mourning I had declared, the people who came were so sincerely happy for me that I started to feel happy for myself. I went out, and then I went home to the cat, and I wasn’t left alone for a minute, because everyone knew and understood I was horrified by the fact I didn’t know to how end this day.

At home, the first thing I did was hug Jean-Paul, the huge teddy bear that Lyosha had given me for my twenty-third birthday. If you pinch his paw, he says clever things. On the day of my wedding, he said, “Love means conceding the person you love is right when he’s wrong.”

I had imagined my wedding night differently. Anya, one of my future bridesmaids at my future, real wedding on the outside, was falling asleep on a nearby couch.

“Hey, what do I do with my ‘wedding’ dress? I was wearing it when the guard led my husband away down the corridors of Butyrka prison.”

“Nothing terrible happened today. I haven’t seen you so happy in a long time. Put that dress on more often.” 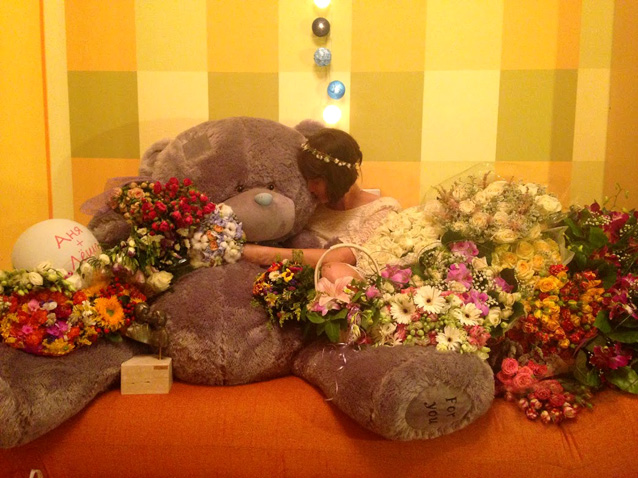 Anna Karpova married antifascist activist Alexei (“Lyosha”) Gaskarov on August 6 in the Butyrka remand prison in Moscow. Tomorrow, August 18, Gaskarov is scheduled to be sentenced with the second group of defendants in the Bolotnaya Square case. Read his closing statement at their trial here. Images courtesy of Snob.ru and Gaskarov.info.

UPDATE. On August 18, Alexei Gaskarov was sentenced to three and half years in prison.

One thought on “Anna Karpova: My Wedding Night”