It looks as if ace reporter Julia Ioffe has gone over to the Russian World.

It’s a strange thing when a journalist who, only six years ago, wrote an excellent article in Foreign Policy about how officials in Petersburg quickly set up and then rigged elections in two out-of-the-way municipal districts so outgoing Petersburg Governor Valentina Matviyenko’s “upmotion” to the Federation Council and the post of its chair would appear “legal,” would suddenly sink to naïve, angry Russian boosterism and, kick all Americans in the face, to boot.

Okay, so a stadium somewhere in Russia added extra seating when FIFA demanded it. So what? 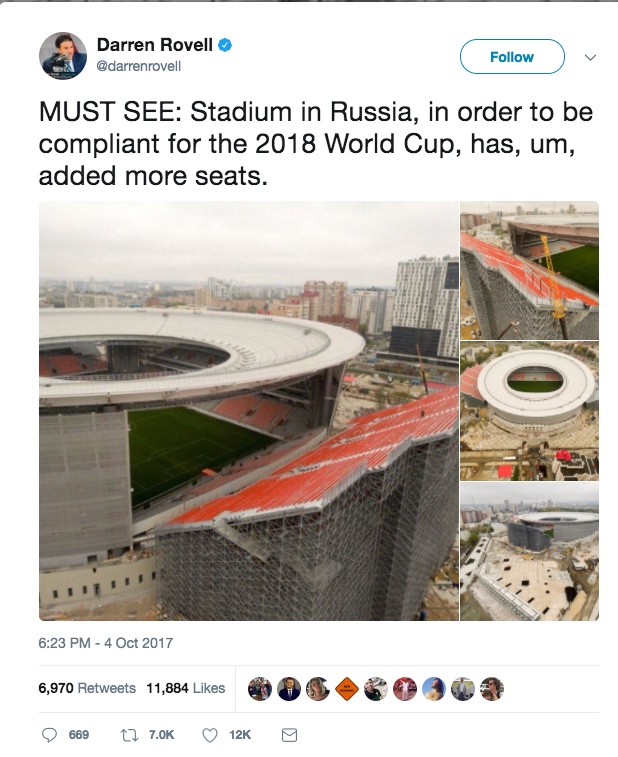 Does Ioffe know about the debacle—involving extreme cost overruns; the employment of North Korean slave laborers, one of whom was killed on the job; the destruction of a federally listed architectural landmark; the multiple firings and hirings of general contractors and subcontractors; numerous revelations of newly discovered structural defects—that has plagued the Zenit Arena on Krestovsky Island in Petersburg, one of the main venues for this past summer’s Confederations Cup and next summer’s World Cup?

Told in full, it’s a mean, ugly story that would not “scare” Americans, but would hardly leave them with the impression Russia was well governed.

Ditto regarding the ongoing destruction of a tiny intellectual powerhouse, the European University of St. Petersburg, which the Kremlin, the Smolny (Petersburg city hall), the courts, and the state education watchdog, Rosobrnadzor, have decided to shut down for no ostensible reason.

Americans, if they are so inclined, can read these seemingly endless stories of Russian official malfeasance, thuggery, and gangsterism until they are blue in the face in publications running the gamut from the high-toned mags for which Ioffe writes to the crap blogs about Russia I’ve been editing for ten years.

I don’t think these hypothetical Americans would be “scared” after doing this extracurricular reading.

If anything, they would conclude (rightly) that Russia is a basket case and should not scare anybody but its own people, who have had to put up with this incompetent, larcenous tyranny 24/7, 365 days a year, year after year, for almost two decades.

The least anyone with a heart and, one would think, in Ioffe’s case, detailed knowledge of these circumstances, should do is avoid cheap whataboutism and extrapolating a media and political non-event (“the new Red scare”) onto an entire country of 325 million people.

I imagine most Americans could not really care less about Russia and the non-Red non-scare. They have things closer to home to worry about. Unlike Russians, ordinary Americans are definitely not obsessed with thinking about what Russians think about them.

But a good number of Russians, including Russian immigrants like Ioffe, are obsessed with thinking about what Americans think about them, and this is especially true among the intelligentsia and elites. (Trust me on this: I’ve been watching it at close range, fascinated but baffled, for almost twenty-five years.) Hence, I guess, Ioffe’s sudden, angry conversion to Russian Worldism. TRR

Since none of what follows, which I’ve excerpted from RBC’s Facebook newsfeed just seconds ago, makes any sense in Russian, I’m translating it by way of beefing up my “transsense” (Zaum) chops. You never know when they’ll come in handy. Truth be told, they come in handy way too often. TRR

The Federation Council plans to form a commission to monitor the hostile actions of foreign states.

The Federation Council thus wants “to display not just its loyalty to the president but also its conformity with patriotic trends,” says a political scientist.

Translation and second photo by the Russian Reader

“US diplomats dressed up as women to participate in [protest] rallies in Russia, claims [Russian Foreign Secretary] Sergei Lavrov. He related an incident in which a diplomat, dressed as a women, went into a building’s restroom, where he changed back into a ordinary outfit.”

But the left wing of the “Trump Is the Workingman’s Choice” movement only has time for the “red scare” that has been “sweeping” the US for all of two or three months. They have nothing to say about the nameless scare that has been warping minds in Russia for 17 years running.

By the way, this story, almost certainly made up, is an “inadvertent” admission, on Lavrov’s part, that the Kremlin really did intervene in the US presidential elections.

What did I write just yesterday?

In Putin’s Russia, the US has been the go-to scapegoat for years now for everything that goes wrong in the country, from crashes in the Moscow subway to, in this recent case, the fact that 15,000 people have signed an online petition calling for the mayor of Tomsk, a major Siberian city, to resign.

Let me repeat that. The shameless scapegoating of the US, usually in the demonic guise of the “Gosdep,” the US State Department, has been going on at all levels of Russian government, mainstream media, and society for many, many years.

It’s actually been going on in certain circles since the mid 1990s. I remember once watching a “documentary” on the local cable access channel back then outlining the CIA’s alleged plan to turn Russian youth onto hard drugs.

Putin, more pointedly, blamed the mighty Gosdep and Hillary Clinton personally for engineering the popular uprising against his regime during the elections of 2011–2012, although there was zero evidence this was the case.

So why haven’t we heard much of anything about this long-running, utterly baseless “red-white-and-blue scare” or “permanent scare”? (I don’t know what else to call it. If you have a better suggestion, let me know).

The scare has claimed lots of real victims, including dozens of Russian NGOs, most of them doing invaluable, irreplaceable work for their own people, not for the Gosdep, on shoestring budgets in terrible conditions, who have been branded “foreign agents” by the Russian Justice Ministry. Many of them have been forced to close up shop or go into exile because they weren’t able to deal with the heavy fines, court hearings, and endless inspections.

But we now have a US president-elect who took literally every opportunity he could during the campaign to gush over Putin and his “strong” leadership. Yet this fact alone—Trump’s flagrant, overt support for a war criminal, crook, and tyrant who has crushed civil society and political opposition in his own country—didn’t automatically disqualify Trump from consideration for the highest office in the land.

Let’s pretend that all the recent skullduggery around Trump isn’t true in the slightest. Would it make any difference?

Trump said time and again that Putin was his idol. Let’s take him at his word and oppose him, among the thousand other reasons we should oppose him, for that huge, steaming, glaring, stinking chunk of very bad, very telling judgment and, more important, not show him the slighest sympathy for the “hard” time he has recently been getting from the press, the White House, the intelligence community, and so on.

He deserves as good as he dishes outs, and what he has been dishing out for the last two years is pure, destructive fascist evil. That will remain true whether the Kremlin hacked anything or slapped together some kompromat on him or it didn’t do anything of the sort.

Trump doesn’t deserve a fair deal for the simple reason that he doesn’t want a fair deal for so many of his fellow Americans and lots of other people, starting with the Mexicans. Let’s treat him like the enemy he is instead of inadvertently defending him and Putinist tyranny to boot by conjuring up equally nonexistent “CIA coups” and God knows what else. TRR

This is how hybrid war really works.

Whenever the US and EU make a (usually milquetoast) move the Kremlin doesn’t like, the Kremlin responds by punishing its own citizens, either collectively or individually, through measures like the counter-sanctions against produce imports (involving the massive confiscation and destruction of perfectly good food in a country where the populace spends 80% of its income on essentials) or the “foreign agents” law, which the wildly misnamed Russian Justice Ministry has been implementing with sheer abandon the last couple of years, doing palpable damage to Russian civil society and social research in the process.

The latest victim in this war of attrition or “cold civil war” against what should be the Kremlin’s home team but which it treats as its sworn enemies is Moscow’s estimable SOVA Center. If the SOVA Center had not existed all these years, we would know 500% less about homegrown racism, discrimination, neo-Nazism, and the Russia state’s quirky battle against “extremism” than we actually do know thanks to the terrific research, monitoring, and analysis carried out by the SOVA Center.

But all the clueless blowhards currently having fun mocking and sending up the so-called red scare gripping, allegedly, the US and Europe, know nothing (or pretend to know nothing) about how the Putin regime has been chewing up the scenery at home for years, leaving an institutional and organizational void in its wake, and the grassroots pushback against this academic, cultural, and political scorched earth campaign. They could not care less about the “white” menace (if we’re getting our political colors right) that was unleashed years ago when Putin took over the country, and they are way too lazy to investigate the myriad of ways the Kremlin has been exercising its imperialist hard and soft power for years right out in the open.

So does it matter whether the Kremlin responded immediately or not to the expulsion of its diplomats? No, it doesn’t. It “gets back” at the Great Satan every single day by relentlessly pounding Russia itself into an unpalatable meat patty.

Thanks to Comrade SH for the inspiration and Comrade GV for the heads-up. Drawing by Helena Rönkä, as published on the website of Verkauden Lehti newspaper on June 12, 2015.