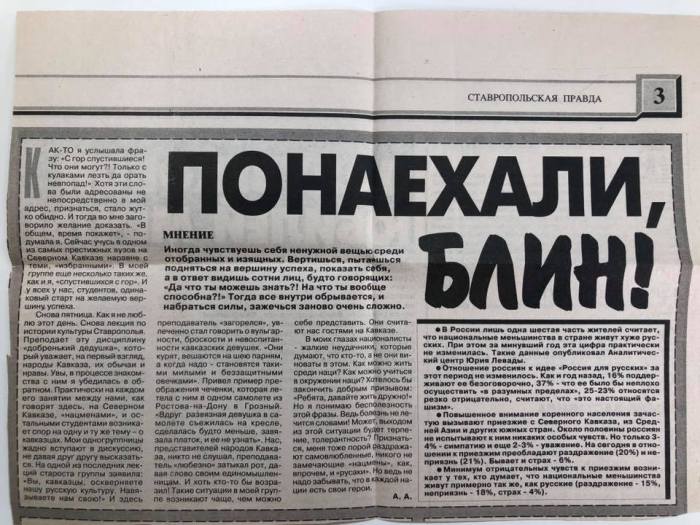 I haven’t written about racism, the death of George Floyd, or the protests all these days. It hurts me to think and talk about it. No matter how childish it sounds, I would have liked to have been on the scene at that moment and saved Floyd by getting personally involved. When I was a second-year student of journalism, I needed such help. I couldn’t breathe, either. I was suffocated by constant reminders that I was an “other,” that I and my kind had “ruined the neighborhood,” that I was “desecrating Russian culture,” and that I was a “blackass.” (Sorry!)

I had thought that once I found myself among educated people, I would finally forget what discrimination and nationalism were. But no. Even more often was I forced to hear comments like “Why are so you normal, when all wogs act like they’ve just come down from the mountains?”

Maybe because you have a lot of prejudices?

I was the only person in my class to graduate from school with distinction, and the teacher decided to congratulate me by saying the following to my schoolmates: “Look, you lot should be ashamed. Even she, a NON-RUSSIAN, could do it!”

During lectures on the cultural history of Stavropol Territory, my female university classmates were eager to prove that Caucasians were originally not from the Caucasus, and that “national minorities” (as they called all non-Russians) had no place in Russia. My classmates would ask me mockingly why I didn’t cover my head with a scarf and celebrate Ramadan. This proved not only that they were ignorant of the history and culture of other countries, but also that they viewed all people with dark hair and thick eyebrows as an undifferentiated black mob of non-Russians with cultures, traditions, and values they found incomprehensible.

When I got a job on the radio, the editor tried to make me lose my “Caucasian accent.” I still don’t understand how I could have had one, since we spoke Russian at home all our lives. Unfortunately, my dad does not know Armenian, as he grew up in Petersburg.

As my colleague Fatima Tlis has correctly pointed out, I could not and cannot even imagine that my schoolteacher, my classmates, and my employers would take to the streets to protest the fact that nationalism made it hard for me and others like me to breathe in Russia. Would the ethnic Russian population have protested the death of a Caucasian, Tajik, or Armenian at the hands of the police?!

The problem of racism exists here in the United States, but it was in this country that I first felt at home. This can be said by many immigrants from all over the world, by people of various nationalities. Here “others” are accepted and given the same opportunities.

I found this copy of an opinion column in the Stavropol Pravda that I wrote as a second-year journalism student in my grandmother’s personal belongings. She trusted me with her innermost secrets. Among letters from her son, audiotapes of her daughter singing, and postcards from her beloved granddaughters, I found my cri de coeur, neatly clipped from the newspaper. My grandmother, the closest person in the world to me, knew how important the subject was to me, how much anguish I feel when faced with injustice.

Anush Avetisyan is a journalist at Voice of America and lives in Washington, DC. Thanks to Sergey Abashin for the link. Translated by the Russian Reader