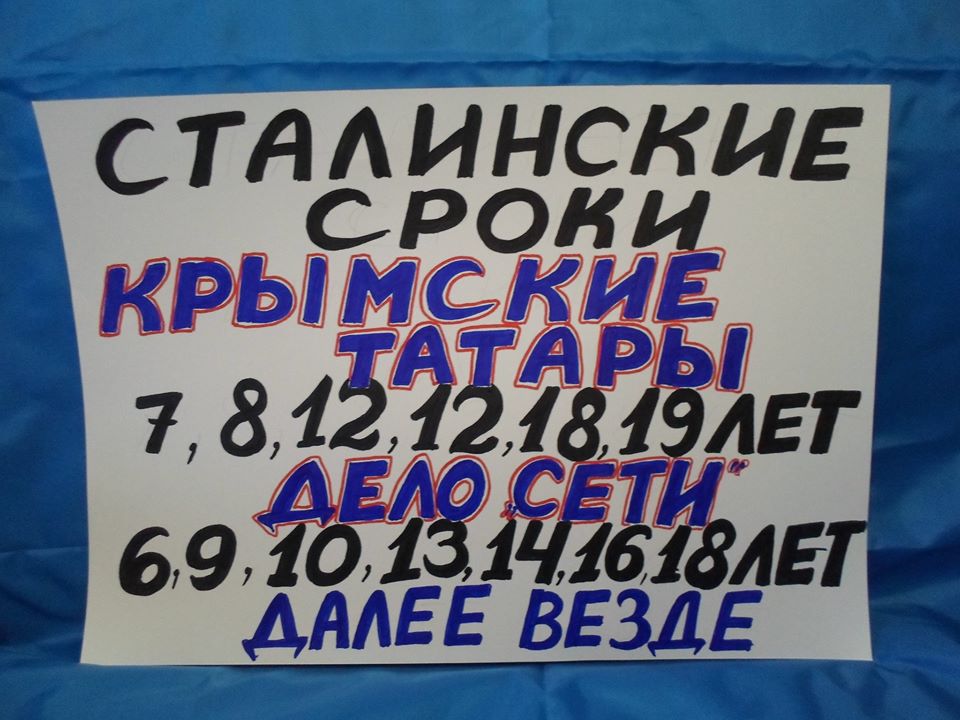 Today I will go to Nevsky Prospect and do a solo picket as part of Strategy 18’s indefinite protest campaign in support of the Crimean Tatars.

My placard addresses the huge sentences handed out to people convicted of far-fetched “crimes.”

My family went through all of this once upon a time. My grandfather was arrested in 1934 and shot in 1937, while my grandmother was imprisoned for nearly 20 years in the Gulag. It is a good thing there is a moratorium on the death penalty, and the arrests have not yet become widespread. But otherwise, the same thing is happening.

In February 2020, the defendants in the Network Case—ordinary young men, anarchists—were sentenced to the following monstrous terms of imprisonment:

I will remind you of the famous quote: “First they came for the socialists, and I did not speak out—because I was not a socialist.” And so on.

What is happening now with the Crimean Tatars—86 of them have been arrested for being from the “wrong” ethnicity and having the “wrong” faith—tomorrow could happen to anyone.

What is happening now with the lads from the Network Case—they were convicted based on testimony obtained under torture—tomorrow could happen to anyone.

Let’s show solidarity with those who have been marked out as sacrificial victims today.

Let’s try and pull these people out of the dragon’s mouth.

When we are together, we have a chance.

Today’s Strategy 18 protest in support of the Crimean Tatars will take place on the corner of Nevsky Prospect and Malaya Sadovaya at 7 p.m.