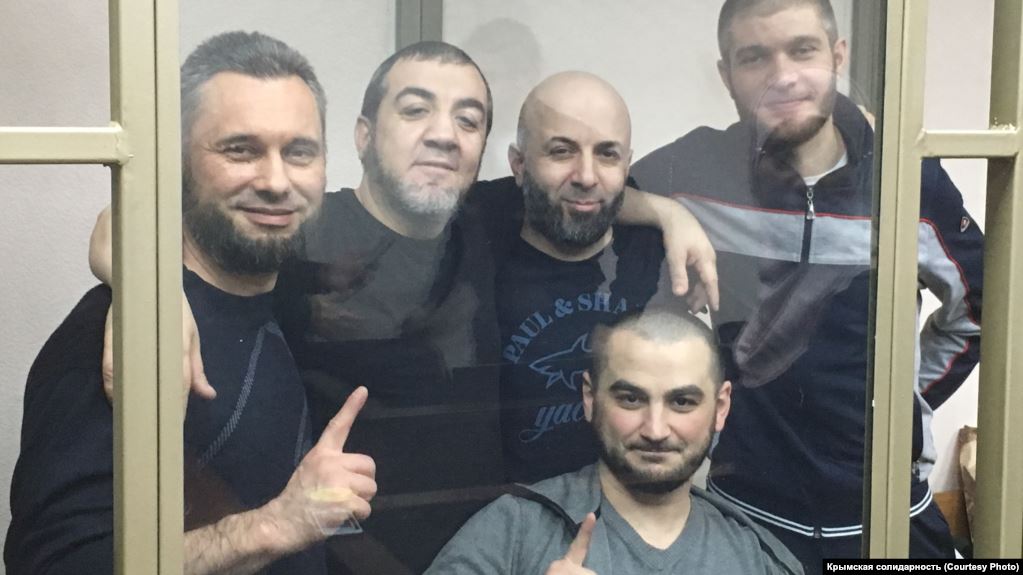 The defendants in the Simferopol Hizb ut-Tahrir trial in Rostov-on-Don. Photo courtesy of Crimean Solidarity and Krym.Realii

Police have been carrying out numerous searches in the homes of Crimean Tatars in several Crimea towns and villages. One man has been charged with organizing a terrorist organization or involvement in one. This news was reported on the Facebook page of Crimean Solidarity activist Luftiye Zudiyeva and the movement’s official Facebook page.

It is known that four people have been detained. Eldar Kantimirov was taken from the village of Zarechnoye in an unknown direction. According to activists, he was charged with organizing a terrorist organization or involvement in one (Russian Criminal Code Article 205.2). The particulars of the case, like Kantimirov’s whereabouts and his official status in the case, are still unknown. They may have to do with the religious organization Hizb ut-Tahrir, which has been declared a terrorist organization in Russia.

Riza Omerov, who lives in Belogorsk, was taken to FSB headquarters. His sister is married to Rustem Ismailov, a defendant in the Simferopol Hizb ut-Tahrir trial. Omerov has three children. His wife, who is seven months pregnant, has now gone into premature labor.

Ayder Jepparov was detained in the village of Zuya in the Belogorsk District. He was also taken to FSB headquarters.

Eskender Suleymanov was detained in Stroganovka, a village in the Simferopol District. He is the brother of Ruslan Suleymanov, a defendant in the Hizb ut-Tahrir trial. The activist was taken to FSB headquarters in Simferopol.

UPDATE. Ruslan Mesutov has been detained. Like Eldar Kantimirov, he has been accused of involvement in a terrorist organization (Russian Criminal Code Article 205.5 Part 2).

Ayder Jepparov, Riza Omerov, and Eskender Suleymanov remain in police custody. It is still not known whether they have been charged as part of the criminal case.

A search has also been underway in the home of Enver Omerov, Riza Omerov’s father. FSB officers stopped his car and detained him during the night. OVD Info has been unable to ascertain whether the security forces have released him.

FSB investigator Sergei Makhnev, who has been involved in the case of the second Simferopol Hizb ut-Tahrir group, led the search. Makhnev has already stated Suleymanov’s case would be incorporated into this case.

Russia has declared Hizb ut-Tahrir a terrorist organization. Its members have been charged and sentenced to long terms in prison only for gathering at people’s homes, reading religious books, and recruiting new members.

According to numerous experts, Hizb ut-Tahrir was wrongly declared a terrorist organization since its members in Russia have never advocated violence or been involved in terrorist attacks.

Our correspondent reports the prosecution in the first Simferopol Hizb Ut-Tahrir trial has asked the North Caucasus Military District Court in Rostov-on-Don to sentence the defendants to long terms in prison camps.

On October 12, 2016, five homes in Crimea were searched by police and security services. Consequently, the five men currently on trial in Rostov-on-Don were detained and charged with involvement in Hizb ut-Tahrir, an organization that was banned in Russia and Crimea, which Russia occupied in 2014.

On December 6, 2018, it transpired the five men had been transferred to a remand prison in the Russian city of Rostov-on-Don.

On February 19, 2019, a secret witness was interrogated during a hearing of the Simferopol Hizb ut-Tahrir case by the North Caucasus Military Court in Rostov-on-Don.

Hizb ut-Tahrir, an international Islamic political organization, says its mission is to unite all Muslim countries in an Islamic caliphate, but it rejects terrorism as a means of attaining their goal. They claim they have been unjustly persecuted in Russia and Crimea, which was occupied by Russia in 2014.

The Russian Supreme Court banned Hizb ut-Tahrir in 2003, placing it on a list of organizations deemed “terrorist.”

Defenders of the Crimeans convicted and arrested in the Hizb ut-Tahrir case argue they have been persecuted on religious grounds. Lawyers note that, while it has mainly been Crimean Tatars who have been persecuted by Russian law enforcement as part of the case, Ukrainian, Russians, Tajiks, Azeris, and non-Tatar Crimeans who practice Islam have also been persecuted.

International law forbids an occupying power from enforcing its own laws in occupied territory.

2 thoughts on “Beat the Crimean Tatars, Save Russia!”