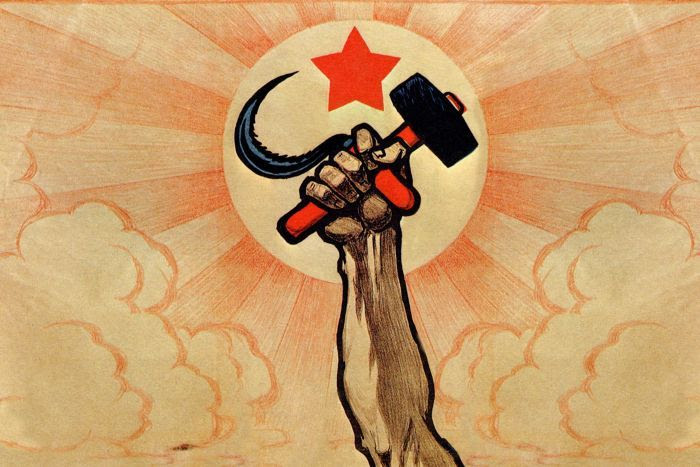 While it’s not entirely true that the centenary of the October Revolution has been entirely ignored or dismissed in Russia itself, enthusiasm for marking the occasion and reflecting on the revolution’s meaning and impact seems to be much higher in other parts of the world.

One proof of this is the email newsletter I just got in my inbox from one of the best radio stations in Anglophonia, the Australian Broadcasting Corporation’s Radio National or ABC RN for short. I’m reproducing it here nearly in full mainly to show what public broadcasting can be like when it stretches its wings a little, but also to reiterate what I’ve said on this website many times.

Russia is now one of the most reactionary countries in the world, and you cannot find more solid evidence than the bizarre attitudes that have been cultivated by Russian authorities and the Russian intelligentsia alike towards not only the October Revolution (about which there is, indeed, a lot to be said, good, bad, and contradictory, as well as legitimate arguments pro and con) but also revolution generally and even just vigorous grassroots involvement in politics.

This is not to mention that real curiosity about other countries, their histories and cultures, has been mostly eliminated from the Russian media, and this is another telltale sign of the blackest reaction. TRR

It’s been 100 years since the Russian revolution, but its impact is still being felt today. So this week we’re zooming in on the Bolsheviks’ seizure of power and the legacy it left behind.

What do millennials see in socialism?
With the collapse of the Soviet Union 25 years ago, it was said that humanity had reached “the end of history”: the Cold War was over and capitalism, along with liberal democracy, had won.

Seventy-five years after the Bolsheviks came to power in the October revolution of 1917, the Russian revolution was no longer widely hailed as an international model for workers’ activism. More often, it was cited as proof the socialist experiment had failed.

Yet this year Jeremy Corbyn — a self-described modern socialist — led UK Labour to a near victory in the country’s general election. And in the US, Bernie Sanders — a Brooklyn-born socialist who honeymooned in the Soviet Union — offered Hillary Clinton an unexpectedly tough challenge in the Democratic presidential primary.

So what does socialism offer young people in 2017?

And it caused political shockwaves internationally, especially in Europe and the United States.

“The Russian revolution was not simply about some redistribution of income or some increase in taxation on the wealthy. It was about changing the fundamental relations of power that existed,” says Wendy Goldman, Professor of History at Carnegie Mellon University.

“Working people embraced the Russian revolution all over the world. And I think that was one of the things that really struck terror into the hearts of ruling classes”.

Hear more about the impact of the Russian revolution.

Inside the House of Government
In a real apartment building that still exists in Moscow, a group of romantic revolutionaries once dreamed of overturning the Czarist monarchy and establishing a golden utopia for workers and peasants.

They succeeded in destroying the monarchy, but not in creating their golden utopia.

The House of Government: A saga of the Russian Revolution is a work of history, structured as novel.

Its author, Yuri Slezkine, grew up in Moscow and remembers the building distinctly.

“I wasn’t really aware it was called the House of Government when I was child,” he explains.

“But I knew of it, as I think most Moscovites did, as a huge grey menacing looking building … covered with memorial plaques, dedicated to various revolutionaries.”

No revolution for Putin
Much has been written, analysed, discussed and debated about the Russian revolution in other countries.

But in Russia, the anniversary is troublesome.

“The population is quite divided on whether or not this revolution was a good thing … [because] by and large the Russian Government likes to embrace historical events which can unite the nation,” explains author and historian Mark Edele, from the University of Melbourne.

So how do you celebrate the birth of communism when it has been renounced and the offspring, the Soviet Union, dissolved?

Russia’s anti-revolution
The philosophy of the late, and seemingly long-forgotten, Russian religious philosopher Semyon Frank is all about the unknowable.

Even his grandson, Berlin-based Nikolai Frank, doesn’t really understand it.

Accompanied by his friend, radio producer David Hecht, Nikolai Frank travels through contemporary Russia, to find out why his grandfather has been hailed by some in President Putin’s elite circle as “Russia’s salvation”.

There, they discover a deeply divided Russian Orthodox church.

Hear more about Nikolai and David’s journey in Russia.

Music of the Russian revolution

The year is 1917, the end of World War I is in sight. But Russia has been removed from the war and is undergoing a huge transition from the Russian Empire into the Soviet Union.

If you were attending the concert halls during this turbulent period, you would have been hearing a lot of Scriabin, who died two years before the revolution, but was seen as a musical champion, both leading up to it and for years after.

“He imagines the end of the world, and the transformation of the world,” explains Professor Marina Frolova-Walker, author of Russian Music and Nationalism from Glinka to Stalin.

Composers like Stravinsky, Prokofiev, Rachmaninov and of course Shostakovich were all affected by the rising Iron Curtain — and some stayed, but many didn’t.

Hear about changes in music before, during and after the revolution.