Even with the Soviet visual propaganda, the city remained spacious and limpid. But the current [powers that be] have killed everything, although they did restore the gates of the Winter Palace.
—Comment on Facebook

Petersburg Now
What follows is a annotated, partial pictorial record of a long walk I took recently in the northern parts of inner Petersburg with a group of local psychogeographers and historical preservationists. The immediate impulse for our walk was the news developers had begun constructing a block of flats cheek by jowl with the renowned power station for the Red Banner Textile Factory, designed by the Jewish German architect Erich Mendelsohn. Worse, it transpired that the developers had the moxie to dub their little contribution to catastrophic urban redevelopment the Mendelsohn Housing Complex, as if they had received the great architect’s blessing for their vandalism from beyond the grave.

The power station of the Red Banner Textile Factory, represented on the map, above, by the oblong on the corner of Pionerskaya and Korpusnaya Streets, is located in the northeast part of Petersburg’s Petrograd Side district. The Mendelsohn Housing Complex, currently in the earliest stages of construction, has been marked on the map as if it had already been built. Image courtesy of OpenStreetMap 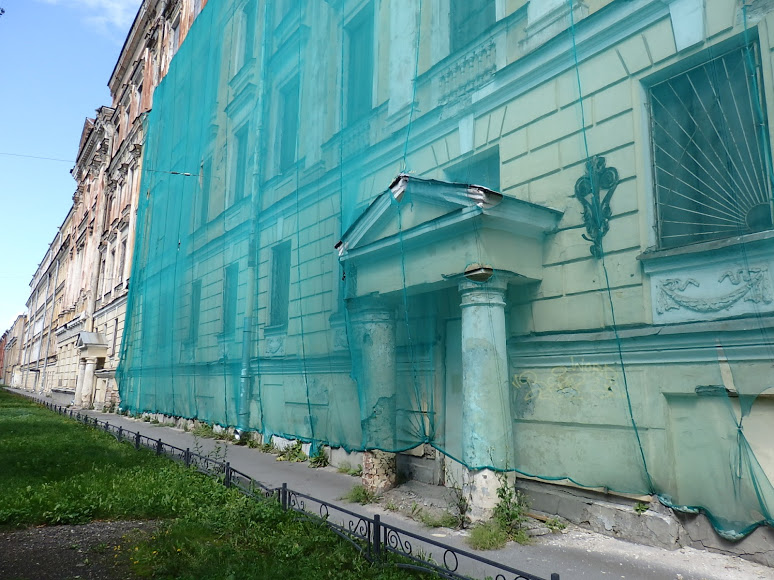 According to a friend of mine, a green veil of netting like this one spells eventual demolition for the “eyesores” thus hidden in plain sight from the public’s gaze.

Part of the Red Banner Textile Factory complex was built (under a different name and different owners, of course) before the Revolution, and it has recently been converted into the Red Cadet Business Center. (The name derives from the name of the street where it is located: ulitsa Krasnogo Kursanta.) But the building right next to it, also part of the pre-Revolutionary factory premises, has been left to go to wrack and ruin, while inside the Red Cadet Business Center courtyard we found the wildly decontextualized attempt at “space age” architecture pictured below. 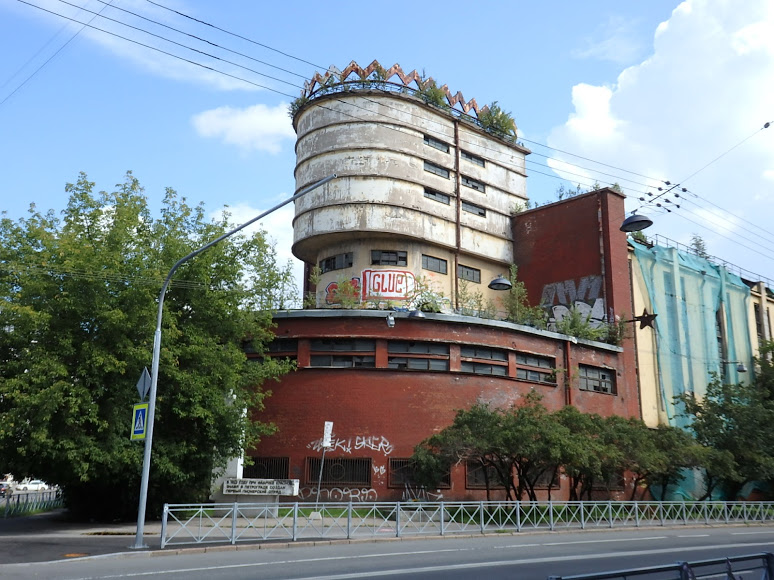 This is Erich Mendelshon’s power station for the Red Banner Textile Factory, 1925-1926. Note the green veil netting, on the right, and the abundance of graffiti, tagging, and wild shrubbery on the power station itself. This, mind you, is how a nationally and locally listed building has been maintained by the powers that be in Petersburg and Russia. My prediction, which I hope does not come true, is that the thugs currently building the so-called Mendelsohn Housing Complex next door will “accidentally” damage Mendelsohn’s power station and then, early one morning when no one has time to react, they will demolish it, since it was “dilapidated” anyway. No one will be punished for this crime against humanity and the future.

This is the so-called passport of the future Mendelsohn Housing Complex. It all looks legal and official, but the plans by developers to build a multi-storey block of flats with an underground parking lot right next to a national architectural landmark should have been nixed by the relevant authorities. Yet on March 10, 2016, the developers, identified as the Baltic Commerce Group of Companies (www.balticom.info), were instead issued a construction permit by the apparently mismonikered St. Petersburg State Construction Supervision and Inspection Service (SGSGNiE SPb). 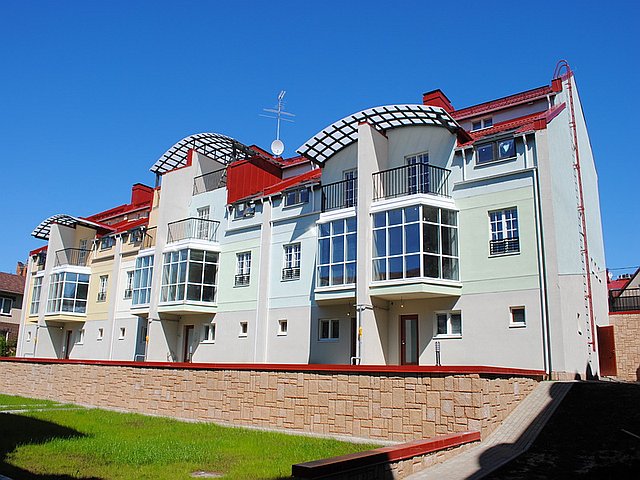 Whatever had been adjacent or attached to Mendelsohn’s power station (including, we remembered, a smokestack that has now definitely vanished) has been demolished and cleared away, leaving the northeast side of the building completely exposed to the elements. 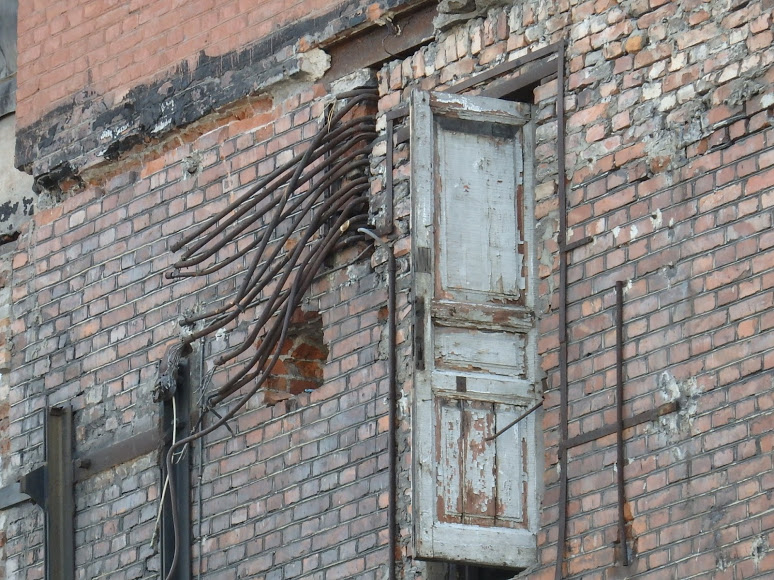 Does this look like a historically preserved building to you? To my eyes, it looks like a candidate for the wrecking ball. And I am afraid that is exactly what the developers and authorities want passersby and the public to see.

The penthouse floors of the nearby Lumiere residential building (Bolshaya Zelenina 18/Korpusnaya 9), designed by Vitruvius & Sons Architectural Studio, and built on the site of Printing Factory No. 17 in 2008-2012.

The Lumiere’s old neighborhood was apparently too common looking for the new age of crony capitalism and heedless redevelopment. Photo courtesy of citywalls.ru

I could try and explain why the local hipsters stubbornly brightening the corners of this increasingly conquered city insist on communicating (via marquees, signboards, hoardings, etc.) with their fellow Russians in English, but I won’t bother. I don’t drink beer anymore, and you would have to take me to a place with Russian on the marquee and ply me with vodka to get the answer out of me. 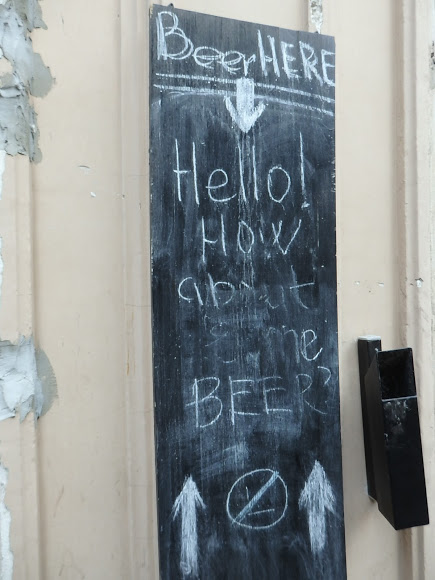 The campaign to wreck one of the world’s most beautiful cities started out as a grassroots, DIY effort, back in the lean mean 1990s.

A view of another constructivist landmark in the neighborhood, the Levashovsky Bread Factory, built by engineer Georgy Marsakov in 1930–1933. The company operating the plant, Darnitsa, moved production to the Petersburg suburb of Pushkin several years ago. Although the building is listed, it could easily go the way of Mendelsohn’s power station if a doable conservation-and-conversion plan is not developed, and soon. As some historical preservationists have argued, what makes the Levashovsky Bread Factory so worth saving is less the building itself, and more what was in it: a continuous cycle production process, conceived by Marsakov, whose function dictated the factory’s outward form. Check out these photos of the factory’s stunning and badly neglected interior.

The soul-destroying effects of modern redevelopment Petersburg-style kick into high gear when you approach the watery verges of the Petrograd Side, which consists of five islands, is ringed by several tributaries of the Neva River, and is roughly bisected by the Karpovka River. Here, the neoclassicist Glukhovskoy Mansion (1810), recently lovingly restored, has been cast into the dustbin of history by Lyavandsky & Gerasimov’s zippy Betta House (2012) and Tatyana Mikhailovna’s dull, needlessly huge Klassika Residential Complex (2007-2012), built on the site of a mechanical casting plant that was still being demolished as the first of several thousand tons of concrete for the future Klassika was being poured.

We crossed the Malaya Nevka River to Krestovsky Island, whose southeast shore is now being built over with overweening apartment blocks with monikers like Privilege (pictured here) and Krestovsky de lux [sic]. 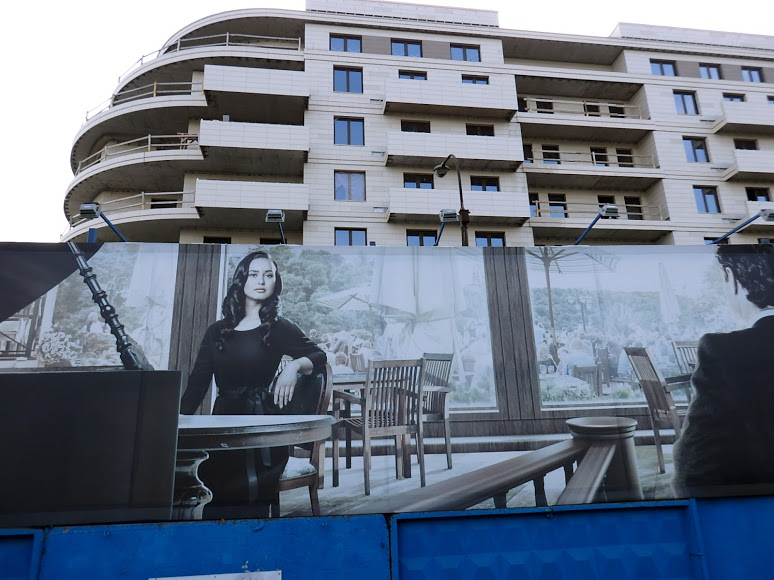 The large hoardings that double as the construction site fence are chockablock with stock images of god knows who enjoying lives of “privilege” god knows where. 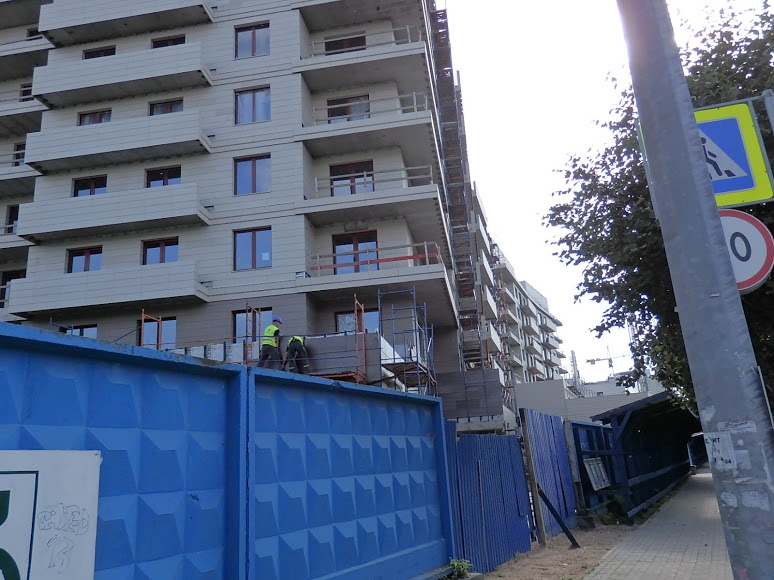 On a hot and humid Sunday afternoon in late July, it was migrant workers from Central Asia, of course, who were slaving away to provide the would-be Russian elites with the privileged life. According to the website of ProNedvizhimost (ProReal Estate), official partners of developers Evrostroy in pre-selling the flats in Privilege, the prices there range from around 220,000 euros (for a one-room flat) to 1.9 million euros (for a four-room flat in a choice location within the complex). According to an April 27, 2016, article in the Petersburg business daily Delovoy Peterburg, during the first quarter of 2016, the average monthly salary in Petersburg among all professions and occupations (except “HR director,” “marketing director,” and “financial director”) was below 60,000 rubles, i.e., a little over 800 euros a month. (The average monthly salary for a Petersburg journalist, however, was half that: 30,000 rubles a month.) Privilege’s own website does not bother with petty details such as actual prices, but it is worth experiencing for its sheer reactionary gaudy awfulness.

If you cannot afford real Privilege, you might be able to move across the street into the OST Elite Housing Complex, built in 1997-1999 by Mark Budnevich and I.A. Solodnikov. It bears all the hallmarks of the architettura povera of the Yakovlev years, which has metastasized into the styleless bombastic eclecticism of the Putin era, in which deindustrialization, oligarch- and state corporation-driven manipulation of capital flows, and real estate development, hand in glove with high political power, have become the only going concerns in town.

Back on the other side of the Malaya Nevka, the Premier Palace and Leontiev Point developments reiterate another basic principle of the new Petersburg non-architecture: crowding and cluttering the long, broad perspectives for which the city was justly famous, blocking the sight lines to the horizon wherever possible, thus making it impossible to ignore the colossal act of aesthetic, economic and urban planning vandalism wrought on the city in a mere seventeen years. 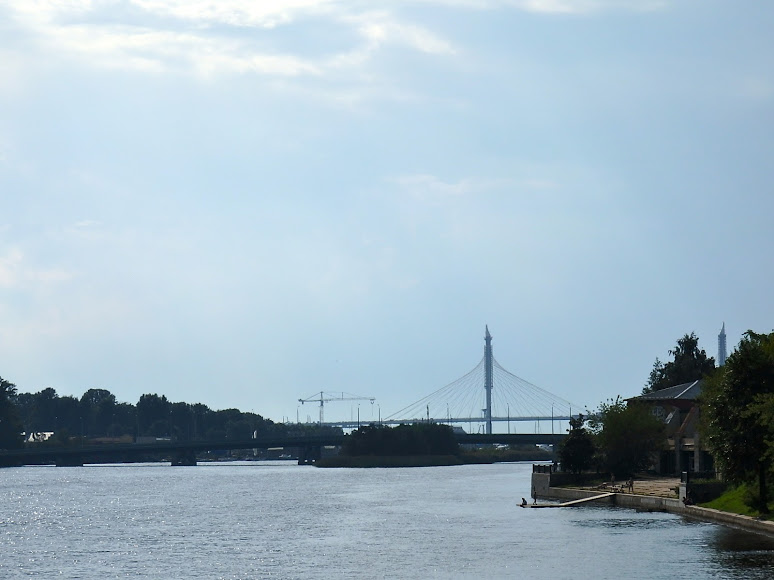 Speaking of which, that is not Godzilla’s nemesis Mothra rearing up and stretching its wings on the horizon, but a bridge spanning the mouth of the Malaya Nevka between Krestovsky Island and the Island of the Decembrists. The bridge is part of the nearly completed Western High-Speed Diameter (ZSD), a toll highway which traverses the city from north to south, primarily along its waterfront. Thus, well into the 21st century, Petersburg city planners have decided to repeat the mistakes of European and US city planners of the 1960s and 1970s, who built multi-lane highways along inner-city rivers and shorelines, some of which were later dismantled because they has made more human-friendly uses of these areas impossible. For more on the ZSD’s traumatic visual impact on Petersburg, see Dmitry Ratnikov’s August 15, 2016, article on the website Kanoner (in Russian). The “Introduction Film” on Turkish contractor ICA Construction’s website for the project is also quite damning. It admits (why hide it?) that well over half of the ZSD’s nearly twelve-kilometer length has been constructed “offshore,” as the filmmakers punningly put it. 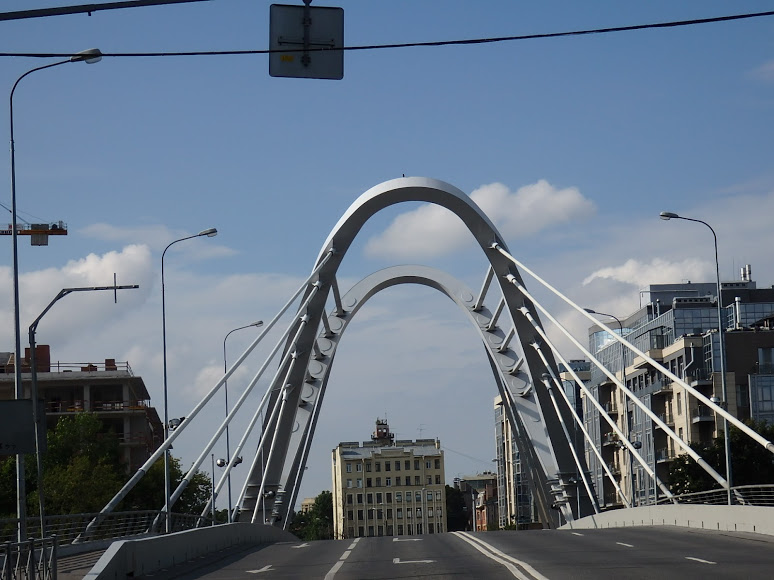 Cables bridges are now all the rage in Petersburg. The wholly reconstructed Lazarev Bridge (2009) took us back over to the Petrograd Side.

The old Lazarev Bridge was humbler looking, but it had trams running on it. Back in the bad old days before the accession of King VVP and the Badiouan event known as the Rising from Its Knees, I rode a tram over this bridge every day for two weeks one fine summer. I was on my way back and forth from the Yacht Club, where two families who traveled the seas and inland waters of Europe on a refurbished Dutch canal boat had moored. I worked as their personal guide and factotum. The tram lines disappeared when the old bridge was dismantled in 2008. Photo courtesy of Wikipedia.

This is a fragment of the official 1980 map of tram and trolley bus lines on the Petrograd Side and Krestovsky Island. Courtesy of aroundspb.ru.

“Saint Petersburg once had the largest tram network in the world, consisting of about 340 kilometers (210 miles) of unduplicated track in the late 1980s. However, since 1995, the tramway network has declined sharply in size as major portions of track were removed, particularly in the city center. Saint Petersburg lost its record to Melbourne, Australia. While it still had 285 kilometers (177 miles) of lines in 2002, by early 2007, the tram network’s length had declined to just over 220 kilometres (140 miles), and by the 2010s operated on just 205.5 kilometers (127.7 miles) of network.” Source: Wikipedia. Needless to say, most of the tram lines you see on this map have been decommissioned long ago.

Despite the semi-official anti-Americanism of the past few years, American blockbusters are still more popular (and profitable) than homegrown films. In this sense, pace the comment that serves as the epigraph to this story, Soviet visual propaganda has been replaced by commercial advertising and, even worse, a profusion of authoritarian public service advertisements.

Although, in the event, we continued wandering the western reaches of the Petrograd Side for another hour or three, I will end my show-and-tell with two evocative signs, one old, one new, which just happened to be right next to one another. I think they tell the whole story in a single blow, as it were, and better than I have just tried to tell it. 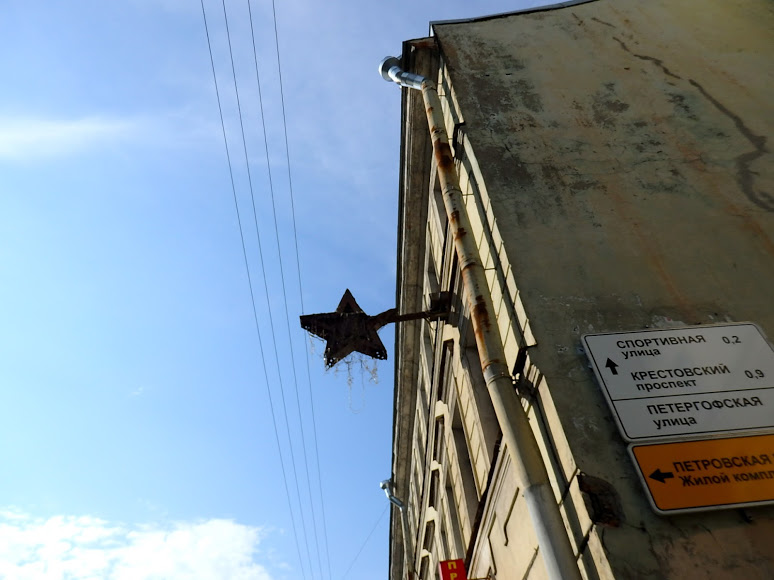 All photos by the Russian Reader, except as noted. Thanks to Comrades KB, VL, VA, and MR for their companionship, cheerfulness, and willingness to join me on this thankless trek. Thanks to Comrades VG and GG for the heads-up on the films, and Comrade DP for the commentary in the epigraph.