Petersburgers have lately been up in arms over a decision, by the municipal toponymic commission, to name a newish bridge over the Duderhof Canal, amid the new estates in the city’s far southwest, the Akhmat Kadyrov Bridge. The decision was recently confirmed by the city’s governor, Georgy Poltavchenko.

Little do Petersburgers suspect (or, rather, care) that for almost the past one hundred years they have been living cheek by jowl with a munitions plant named in memory of German socialist and anti-militarist Karl Liebknecht. TRR

[Modern militarism] wants neither more nor less than the squaring of the circle; it arms the people against the people itself; it is insolent enough to force the workers . . . to become oppressors, enemies and murderers of their own class comrades and friends, of their parents, brothers, sisters and children, murderers of their own past and future. It wants to be at the same time democratic and despotic, enlightened and machine-like, at the same time to serve the nation and to be its enemy.
—Karl Liebknecht

The company manufactures advanced products for military use, popular on the international arms market, works on state defense orders and in cooperation with other plants, and produces non-military products and consumer goods. 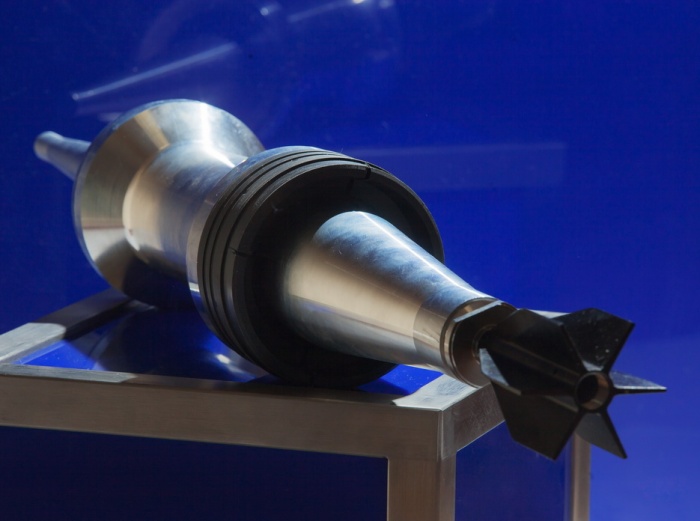 The Karl Liebknecht Leningrad Mechanical Plant is the only company in Northwest Russia specializing in the production of artillery shell casings.

We successfully execute important state commissions and make a significant contribution to the defensive power of our country and friendly nations.

Russia is interesting from this point of view. The high state of tension in its international position has forced it to introduce universal military service, while as an Asiatic-Despotic state it is faced with an unequalled internal conflict. The internal enemy of Tsarism is not only the proletariat, but also the great mass of the peasantry and bourgeoisie, even indeed a large part of the nobility. Ninety-nine per cent of Russian soldiers are by class position bitter enemies of Tsarist despotism. A low level of culture, national and religious conflicts, and also contradictions in economic and social interests, together with the more or less subtle pressure exercised by the extensive bureaucratic apparatus as well as the unfavourable local organization, the inadequately developed transport system and other things: all these represent an important check on the development of class-consciousness. There exists a much attacked system of elite troops, who are provided with every facility: the gendarmerie, for example, and especially the Cossacks, which effectively constitute a special social class on account of their good pay and other material provision, of their extensive political privileges, and of the arrangement by which they live in a semi-socialist community; they are thus closely bound in an artificial way to the ruling classes. In this way Tsarism tries to secure a sufficient number of loyal supporters to offset the ferment which has penetrated deep into the ranks of the army. And to all this, to these “watchdogs” of Tsarism, there must be added the Circassians, and other barbarian peoples living in the empire of the fist, who were loosed over the land like a pack of wolves in the Baltic counter-revolution, together with all the other numberless parasites on Tsarism, the police and their accomplices, and the hooligans and black hundreds.

But if in the bourgeois-capitalist states the army based on universal military service and designed as a weapon against the proletariat represents a frightful and bizarre contradiction, the army based on the same system under the despotic Tsarist system of government is a weapon which is necessarily turned more and more with crushing weight against the Tsarist despotism itself. The experiences of the anti-militarist movement in Russia can therefore only be applied to the bourgeois-capitalist states with the greatest of care. And if the efforts of the ruling classes of capitalism in the bourgeois-capitalist states to bribe the people to fight against itself—to a great extent indeed with money actually taken from the people—are finally doomed to failure, we already see before our very eyes how the desperate and pitiable attempts of Tsarism to buy off the revolution by bribery are suffering a rapid and wretched fiasco in the tragic world of Russian finance, in spite of all the attempts of unscrupulous international capital to save the régime. The question of financial loans is certainly an important one, at least for the tempo of the revolution. But if the revolutions cannot easily be made, it is even less easy to buy them off, even with the means available to the big capitalists of the world.

Our Company
When it was founded on October 15, 1911, Karl Liebknecht Leningrad Mechanical Plant JSC was called the Parviainen Russian Society for the Manufacture of Shells and Military Supplies. Subsequently, it had a number of other names featuring the phrase “Karl Liebknecht Mechanical Plant.” By decree of the Council of People’s Commissars, the company was nationalized on June 28, 1918. In different periods of its history, the plant has been part of the Soviet Ministry of Machine Building (First Chief Directorate), the Department of Munitions and Special Chemicals at the Ministry of Industry, the Committee on the Russian Defense Industry, and the Russian Ministry of Defense Industries (from 1992), the Russian Federal Economics Ministry (from 1997), the Russian Munitions Agency (from 2000), and the Department of Munitions and Special Chemicals at the Russian Industrial Agency of the Ministry of Industry and Energy. From August 2008 to the present, the company has been been overseen by the Department of the Conventional Weapons, Ammunition, and Special Chemicals Industry in the Ministry of Industry and Trade.

Resolution Adopted by an Assembly of Workers at the Old Parviainen Plant, April 13, 1917

We, the 2,500 workers of the Old Parviainen Plant, having gathered on April 13 for a general plant assembly and discussed the current situation, have resolved as follows:

1) We demand the removal of the Provisional Government, which acts only as a brake on the revolutionary cause, and hand over power to the Soviets [sic] of Workers’ and Soldiers’ Deputies;

2) Relying on the revolutionary proletariat, the Soviet [sic] of Workers’ and Soldiers’ Deputies must put an end to this war [my emphasis], which has benefited only the capitalists and landlords and weakened the forces of the revolutionary people;

3) We demand the Provisional Government immediately publish the secret military agreements entered into by the previous government with the Allies;

4) That a Red Guard be organized and all the people armed;

5) We protest the issuing of the so-called Liberty Loan, which actually serves to subjugate rather than liberate;

6) That the printing presses of all the bourgeois newspapers leading the campaign of hatred against the Soviet of Workers’ and Soldiers’ Deputies and the workers’ press be requisitioned and handed over for use by workers’ newspapers;

8) We protest against England’s interference in our domestic affairs and the detention of emigrants;

9) That all food products be requisitioned for the needs of the masses, and fixed prices be set for all consumer goods;

10) That peasant committees immediately seize manorial, demesne, imperial, and monastic lands, and the tools of productions be handed over to the workers;

11) We protest the withdrawal of revolutionary troops from Petrograd;

12) That it be recognized the Provisional Government can in no way arrange for the issuing of pensions to former ministers and their families, indigenous enemies of the people.

The canal where they drowned Rosa
L., like a stubbed out papirosa,
Has almost virtually gone wild.
So many roses have moldered since that time,
It is no mean feat to stun the tourists.
The wall, concrete forerunner of Christo,
Runs from city to calf and cow
Through fields blood has scoured.
A factory smokes like a cigar.
And the outlander pulls up the native gal’s
Frock not like a conqueror,
But like a finicky sculptor,
Getting ready to unveil
A statue fated to live a while
Longer than the reflection in the canal
Where Rosa was canned.