A while back, I came across this curious sounding prospectus for a new convenience store in Petrograd.

About the Place:
Portlandia is a new project in the convenience store format.

The idea to create Portlandia* sprang from a love of fellowship, food, the art of cooking, and shared experiences, as well as an acute shortage of quality products (in the broad sense) in St. Petersburg.

It is very important that our customers are always satisfied with not only the quality of the goods but also the range, which boils down to the basics, but things sufficient for comfort: farm-fresh produce, popular high-end products, household goods, and kitchen utensils.

The first thing we care about is the location of the store. Since many neighborhoods in the city center suffer from a lack of hypermarkets, and there are not enough grocery stores with high quality products, we decided to take up residence in apartment buildings.

* Portland is a city in the state of Oregon in the United States. It is considered the undeclared capital of foodies and hipsters. Authentic and incredible gastro festivals and lots of interesting things happen there. Young creative people bent on healthy eating and self-realization live there. They are always coming up with strange pastimes for themselves and are proud of the result. That, in short, is Portland.

In 2011, the American TV series “Portlandia”, which we could not help but fall in love with, premiered. This series, in fact, is our whole life in a nutshell: para-gastronomical insanity, awe over the topic of bars, as well as sketches about the creativity of the silly Portland hipsters with their passion for music festivals, DJ-ing, and all the things that we in Russia (especially in St. Petersburg) are just beginning to go crazy over.

It sounded odd but potentially interesting, only the address put me on my guard.

That address (Ulitsa Paradnaya 3/Vilensky Pereulok 35) suggested this “hipster’s paradise” was at the heart of a newish high-rise housing estate, Paradny Kvartal, that had been erected a few years ago on the bones of another old neighborhood that should have been wholly protected by city and federal preservation laws and the city’s status as an UNESCO Heritage Site. But this is what went down instead, as reported at the time by Sergey Chernov of the now-defunct St. Petersburg Times, with a little assistance from the now equally defunct Chtodelat News (whose better intentions live on in this blog).

Legality of Demolition of Historic Barracks Contested
By Sergey Chernov
The St. Petersburg Times
May 11, 2011

Another planning controversy is developing in the city, as more historic buildings in the center were demolished last week to make way for luxury apartment and office buildings.

Built by architect Fyodor Volkov in the early 19th century, the demolished buildings on the corner of Paradnaya Ulitsa and Vilensky Pereulok are known as the Preobrazhensky Regiment’s Barracks and used to house one of the Russian army’s oldest regiments, formed by Peter the Great in the late 17th century.

Following a public outcry, Governor Valentina Matviyenko ordered an internal investigation into the legality of a construction permit issued by the St. Petersburg State Construction Supervision and Expertise Service (Gosstroinadzor). The agency is subordinated directly to Matviyenko.

Matviyenko’s orders were based on a memorandum sent to her by City Hall’s Heritage Protection Committee (KGIOP) after the last building was demolished on May 3.

The local press suggested that the investigation may result in the dismissal of Gosstroinadzor’s head Alexander Ort. Preservationists and public figures such as film director Alexander Sokurov asked Matviyenko to dismiss Ort in a petition in January.

The developer failed to show the demolition permit, according to Minutina.

“Demolition is a separate type of work that requires a separate permit,” Minutina said Tuesday.

“Nevertheless, it was not presented to us, nor have they seen it at the KGIOP and I’m not sure it ever existed. Of course this is a violation.”

“Besides, buildings in the center can only be demolished if they are in a poor condition, but we haven’t seen any document stating that the building was in a poor state and impossible to restore either.”

Minutina said the demolition was one of the issues the preservationists are planning to raise during a planned meeting with Matviyenko on Thursday.

While the last building was being destroyed during the May Day holidays, the authorities did not react to the appeals of concerned residents. At the same time, police reportedly harassed activists who picketed the demolition site, rather than checking whether the developer had the necessary permits.

“We waited for two hours for the police to arrive,” Living City’s Pyotr Zabirokhin said.

“But instead of stopping the demolition, they started checking our passports, copying our placards into their notebooks and threatening to disperse us if we didn’t go away.”

The tactic of demolishing historic buildings during public holidays was recently used when a large portion of the 19th-century Literary House was destroyed on Nevsky Prospekt during the Russian Christmas holidays in January, Zabirokhin pointed out.

“It has turned into a bad tradition that not entirely legal cases of demolition start during or just before holidays, when people are not ready to get mobilized quickly, and while officials are on holiday and nobody can be reached,” he said.

According to the project’s web site, the area previously occupied by the Preobrazhensky Regiment Barracks will be home to an “exclusive” Paradny Kvartal, an isolated “mini city” of 16 office and residential buildings. 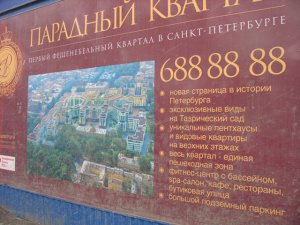 “The true adornment of the quarter’s center will be a square with a fountain, comparable in size with that in front of the Kazan Cathedral,” the web site said.

However, apparently as a result of the controversy, the site was no longer available on Tuesday, redirecting to the web site of the developer, Vozrozhdeniye Peterburga. The original site can be viewed as files cached in Google.

Anna Mironovskaya, the marketing director of Vozrozhdeniye Peterburga, a subsidiary of the LSR Group, said Tuesday her company was only a sub-investor and was not in charge of legal matters and permits, citing the Ministry of Defense as the project’s developer and the Pyotr Veliky Construction Company as the commissioner.

One of the main advantages of Paradny Kvartal is the social homogeneity of [one’s neighbors]. Our buyers are people of high social status. That is why we will be able to create “our own world” in which it will be pleasant and comfortable to live.

— What does the phrase “noblesse oblige,” which is frequently applied to Paradny Kvartal, mean?

The well-known phrase has rightly become not just the slogan but the authentic motto of Paradny Kvartal. It translates as “[one’s] station obliges [one].” For in Paradny Kvartal each detail underscores the project’s elitism, its exclusivity.

I had not been back to that site of class warfare camouflaged as “redevelopment” since that grey unpleasant day in May four years ago, although whenever I was in the vicinity it had been hard to avoid catching sight of Paradny Kvartal towering on the horizon over its older neighbors. Not only had the elitist high-rises probably been built in violation of the height regulations for the historic center, but the whole estate, I disovered when I revisited it a few weeks ago, has been erected on a one-storey-high pile of landfill, probably to accommodate lots of subterranean parking.

Hipster convenience store Portlandia proved quite hard to find amid the vast pseudo-Petersburgian, semi-ghost town that is Paradny Kvartal. 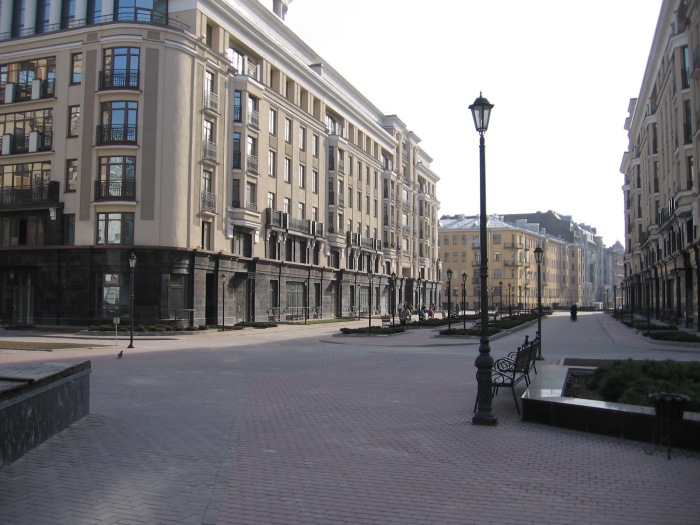 Part of the problem was a lack of sensible signage and maps, but mostly it was hard to find anything when many of the first-floor commercial spaces were still awaiting occupants. 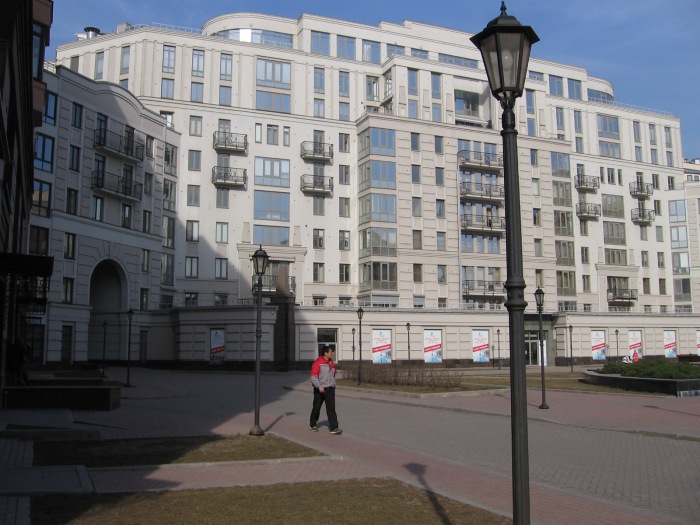 This, by the way, seems to be the “square with a fountain, comparable in size with that in front of the Kazan Cathedral,” mentioned above.

Since the dubious reign of Valentina Matviyenko, who presided over the destruction of the Preobrazhensky Barracks, as well as much else of architectural merit, the city has been fountanized to the point of bursting, with two of its major Lenin monuments also having been juvenilized as water fun parks of a perverse sort. But Paradny Kvartal’s (perhaps non-functioning) fountain had been wisely boxed up for the winter.

I finally found Portlandia the hipster convenience store. I can say that the picture from the prospectus, above, does it justice. It is as empty and pointless as the picture suggests, and “convenient” only if you have been locked inside this mini city and desperately want to buy local craft beer and designer aprons at a heavy mark-up. That is, if you want stuff readily available elsewhere, probably just outside the gates of this noblesseobligeville, but for many fewer rubles.

Even at its most gentrified, the real Portland, Oregon, is a delightful, gritty socialist paradise compared to the soulless, Putinesque anti-Petersburg on display inside Paradny Kvartal.

And the connection with Portlandia the TV show I just don’t get at all. Portlandia is often mildly funny and at least slightly in touch with the city it sends up and where it is filmed. I cannot even imagine a comparable program dealing with Petersburg’s foibles and sillinesses being made here nowadays, in this dark-as-pitch and utterly humorless period, although there were such programs in the “lawless” nineties (e.g., Gorodok and Ostorozhno, modern!).

It’s frightening to think that much greater swathes of the inner city would look like Paradny Kvartal now were it not for the spunkiness of the tiny, embattled, and nowadays almost totally extinguished gradozashchitniki (city defenders) movement, which only six or seven years ago set the entire country on its ear by defeating Gazprom and its planned skyscraper.

But the city’s real salvation, such that it has been, has come from timely economic crises and sheer bureaucratic corruption and incompetence.

And yet Putinism in architecture and city planning has managed to do a lot of damage to this fine city, while signally failing to fix almost any real problems, of which there are almost too many to count.

As I happily exited Paradny Kvartal, a sign reminded me I was leaving the “first fashionable quarter in Saint Petersburg.” 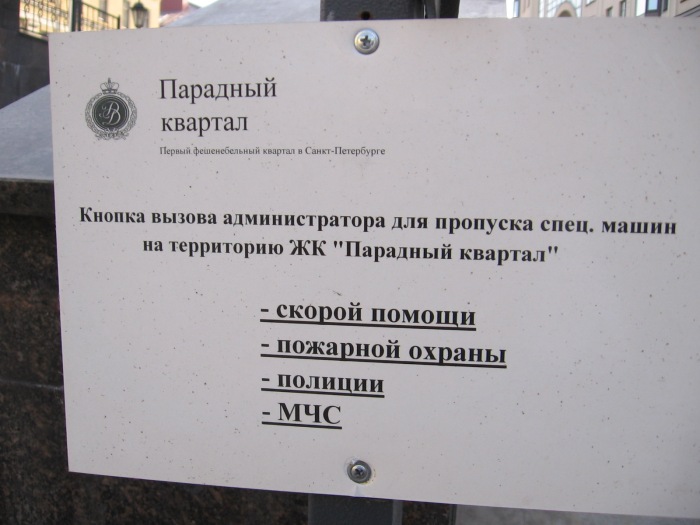 As I dashed down the ramp into the “unfashionable” Petersburg, it was like returning to life after a longish period in cryogenic refrigeration. 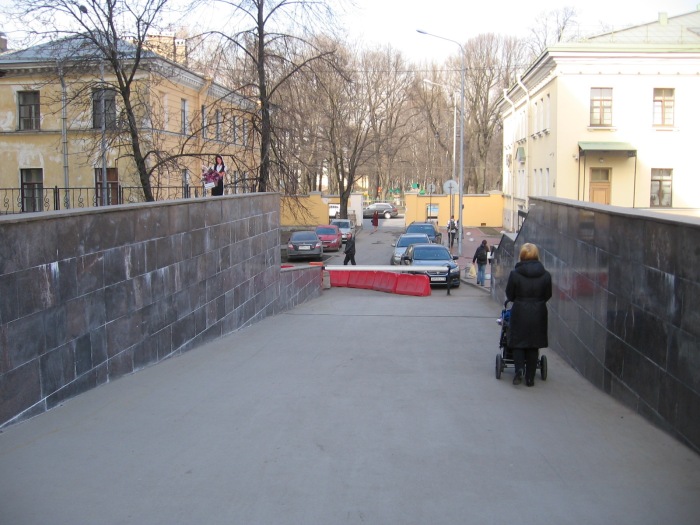 One of the first things I saw there in the real city, warts and all, was a memorial plaque, reminding me that once upon a time people in this city had big ideas, and had dreamt of and fought for better futures.

Of course, we can argue the merits of different political ideas and the methods of realizing them. But places like Paradny Kvartal are idealess vacuums, pure embodiments of the blackest political reaction and the lack of any vision of the future on the part of Russia’s wildly corrupt ruling classes.

Even the sometimes justly maligned Russian hipster deserves better than Portlandia the inconvenience store and its airless environs.

With a little elbow grease and imagination, the old Preobrazhensky Regiment Barracks could have been transformed into a real hipster’s paradise, into a little village of low-income housing and affordable shops and cafes. Minus the hipsterism, it almost was like that back in the “wild” nineties. At any rate, it was at least as shabbily livable as any other part of the central city back then. Which despite its shabbiness was a hundred times more beautiful than it is now.