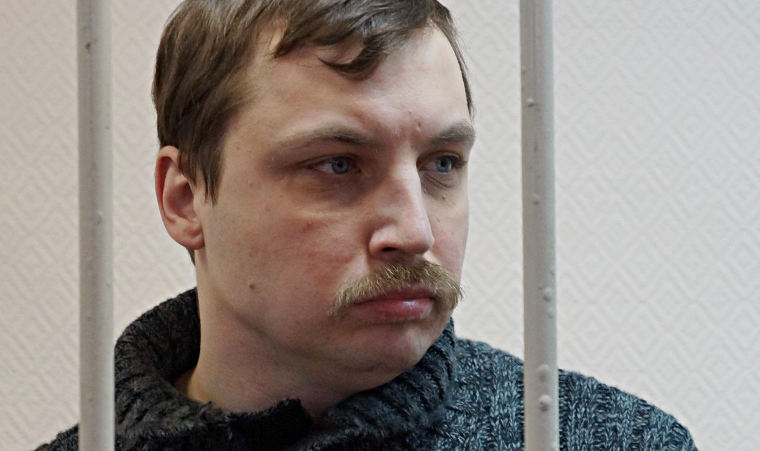 On March 13, Mikhail Kosenko’s sentence will be appealed in Moscow City Court. Mikhail [who was declared a prisoner of conscience by Amnesty International] was one of the Bolotnaya Square defendants, and he was sentenced [in October 2013] to compulsory treatment in a psychiatric hospital. His case was originally tried separately from that of the other defendants because of a disability. But his story really should be treated separately: it is so simple and straightforward, as if it were staged on purpose to make clear to anyone, even a child, that in Russia a struggle is underway not between two groups of people who hold different views on the country’s future, but between people and monsters.

Mikhail’s trial lasted almost a year. During this time, Zamoskvoretsky District Court Judge Ludmila Moskalenko did not permit Mikhail a single family visit, although she knew that Mikhail’s mother was ill and her health was deteriorating. And when his mother died in September without having seen her son again, Moskalenko refused to let Mikhail attend the funeral. Mikhail found out about all this, about his mother’s death and the fact he could not say goodbye to her, in a cell in Butyrka Prison from a REN-TV news report.

During the trial, defense attorneys presented videos and photographs showing that Mikhail did not even come close to police officer Alexander Kazmin, whom he allegedly kicked and hit, tearing off his ammo pouch. Four eyewitnesses corroborated that Kosenko had not touched the “victim.” When Kazmin himself testified at the trial, he was unable to identify Kosenko as the man who had assaulted him and refused to perjure himself. “I’m not Russian trash,” he said.

On October 8, 2013, Judge Moskalenko found Mikhail Kosenko guilty and sentenced him to compulsory treatment in a psychiatric hospital. His treatment could last indefinitely. If, by analogy with the old Soviet Union, we imagine that the Chekists [i.e., the Putin regime] will stay in power another fifty to sixty years, then there is every chance Mikhail will never get out of the madhouse. But even if he gets out in ten years or three years, the consequences could be irreversible. Mikhail really does have a [mild] mental illness and problems with communicating, but anyone who followed the trial over the last year would have come away convinced that Kosenko is an absolutely sane, reasonable and intelligent man. At the very least, read his statement in court.

“Palace” psychiatry is quite capable of turning this man into a vegetable, all because, two years ago, a certain man had his inauguration spoiled and took offense. On March 13 at 10 a.m. in Room 334 of the Moscow City Court (8 Bogorodsky val) we can try to prevent it from happening. Let’s try! Mikhail’s sister, nephew, and cat Musya (whom he took in from the streets), are waiting for him to come home.