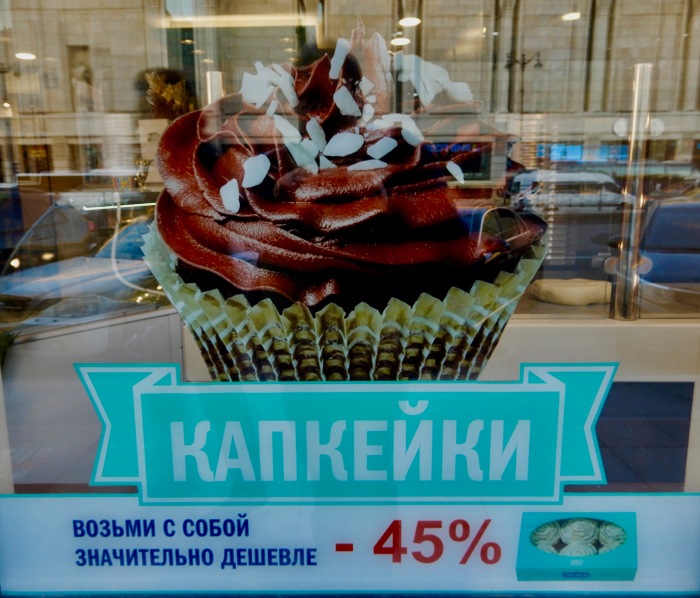 “Cupcakes. Considerably cheaper when you take away. 45% off.”

This post is dedicated to the armchair fascist who recently asked on the readers’ forum of the anti-Semitic, pro-Putin website The Saker whether George Soros financed the Russian Reader.

I will answer the fascist’s oh-so-pertinent question by quoting from the weekly news wrap-up emailed to readers and supporters on Fridays by the folks at OVD Info. I would gather OVD Info is not financed by Soros, either. In fact, I know they are financed by donations from not very well off people like me, people who work for a living and are not financed by anyone but the sweat of their brows.

More than 600 people were detained in Petersburg on September 9. A week later, another unauthorized protest against the pension reform took place in the city. This time, however, only three people were detained during the protest itself. But the police went on a real manhunt for local activist Shakhnaz Shitik. After she photographed a police officer at the protest, the police tried to detain her. They maimed her and sprayed tear gas in her face. Afterwards, Shitik was taken to hospital, but police tried to detain her there as well. Ultimately, her husband was taken to a police precinct, but offiers remained on duty in her hospital ward. Subsequently, Shitik was taken back and forth from the hospital to the precinct several times until she was finally left to spend the night at the precinct. A court ordered her jailed for twenty days, ostensibly for her involvement in a theatrical performance that depicted Putin being chased away by pensioners. In addition, the police made Shitik provide them with a written statement on suspicion she had violated the law against insulting the authorities. A female Center “E” officer who had passed herself off as a reporter at the hospital had taken offense at something Shitik said.

Photo and translation by the Russian Reader. The Russian Reader is a website that covers grassroots politics, social movements, the economy, and independent culture in Russia. It is not financed by anyone nor has it ever solicited donations. All work on the website is done for free, nor do I pay fees for the Russian-language articles I translate into English and publish. Everything that appears on the Russian Reader can be reposted and republished as long as the Russian Reader is indicated clearly as the source and a link back to my original post has been included.

Editor’s Note. Confused readers might imagine that the following (excerpted) screed from the hilariously named website The Saker (for the ornithologically challenged, the saker is a falcon used in falconry) is an apology for fascism. Actually, they’d be right.

“There are no separate Russia or Ukraine, but one Holy Rus” – Elder Iona of Odessa

The year 2014 saw an unprecedented surge of patriotism in contemporary Russia, which resulted in popularizing the notion of the Russian World. One reason for increased patriotic sentiment was Crimea’s return to the home port after the overwhelmingly positive vote by its majority-Russian residents in a referendum one year ago. The onset of the liberation war in Donbass from the West-backed Kiev regime was the other. This war truly delineated the stakes for the existence of the Russian World. The latter is not an ethnic, but a civilizational concept that encompasses shared culture, history, and language in the Eurasian space within a traditionalist framework. To a certain extent and despite the obvious ideological differences, the Russian Empire and the USSR embodied the same geopolitical entity. A particularly noteworthy aspect of the ongoing crisis in Donbass is the symbolism—religious and historic—that surpasses the commonly used, but outdated Left-Right political spectrum. In the Russian context, this also means overcoming the Red-White divide of the Communist Revolution. That this war pushed Russians to examine their country’s raison d’être is somewhat remarkable: for two decades its citizens did not have an official ideology, prohibited by the Constitution that is based on Western models. The emergence of a new way of thinking in Russia will become clearer once we refer to the meaning of religious insignia, wars—Russian Civil and Great Patriotic, as well as the question of ideology in the Postmodern world.

In fact, post-Liberal ideology is one of the factors that blinds many Westerners to the realities of the liberation war in Donbass. The current Western model of citizenship is an abstract one: it centers around a set of principles in which individuals are interchangeable—as long as they adopt “European values” or the “American way of life”—instead of the more traditional notions of rootedness in the landscape, cultural and linguistic ties, and ancestral bonds. Thus, those who subscribe to this abstraction have difficulties understanding how belonging to the same people (narod) overrides living in two different states—contemporary Russia and Ukraine—haphazardly formed at the time of the Soviet collapse, and why they seem so attached to their language, culture, religion, history, and land that they are willing to die for them. But even for those Russians that lean toward more traditionalist thought, it took this war—the war that was meant to separate—to ideologically and spiritually unite them with others like them across the border, to begin questioning who they really are, uncertain, but hopeful, forging the idea of the Russian World. Beyond Left and Right, Beyond Red and White.

—Nina Kouprianova, “Beyond Left and Right, Beyond Red and White: Framing the Liberation War in Donbass,” The Saker, March 18, 2015

You would be right in asking, Who the heck is Nina Kouprianova? What does it matter what she thinks? But what this guy thinks does matter and he seems quite on message with Ms. Kouprianova:

Putin also addressed Ukraine’s struggles, saying “extreme nationalism is always harmful and dangerous,” and implied that Ukrainian voters would hold the parliament and the Poroshenko Administration responsible the country’s current mess. “I, for one, have always thought of Russians and Ukrainians as a single people,” he added.

His intentions could not be plainer.

Thanks to Comrade NT for the heads-up on this depressing new website.