A fruits and vegetables stall at the famous Hay Market (Sennoy rynok) in downtown Petersburg, September 29, 2018. Photo by the Russian Reader

Eating Their Fill: Russia’s Food Security in the Wake of Crimea
Have Russians Eaten Better After the Government Moved to Defend Them from Western Food?
Yevgeny Karasyuk
Republic
December 6, 2018

Soon after the embargo that was imposed four years ago in response to the stance of western countries on Crimea, analysts warned Russia itself would primarily suffer from food anti-sanctions.

“We won’t heighten the Russian Federation’s food security at all. In fact, we will reduce it,” Natalya Volchkova, a professor at the New Economic School, said at the time.

Of course, the criticism of the experts was ignored. No one in government questioned the policy of forced import substitution. Most Russians even imagined it was a rare instance when the government made a good decision. Only a few years ago, 71% of the populace [sic] spoke in favor of limiting imports.*

Time has passed, and the experts to whom no one listened have compiled figures showing where the policy has taken the country. A recent report, authored by a group of researchers from RANEPA, provides an analysis of its consequences.

Import substitution in the food sector was an obsession and, at the same time, a source of pride for ex-agriculture minister Alexander Tkachov. His replacement, Dmitry Patrushev, son of the Russian Security Council’s secretary and a none-too-successful state banker, has changed little in the government’s take on the situation. The new minister is certain Russia has reached a level of self-sufficiency above 90% in terms of basic food staples. Thus, Alexei Gordeyev, deputy prime minister for agriculture and an ex-agriculture minister himself, is convinced Russia has successfully carried out import substitution.

Food imports actually did slump sharply—by 46%—from 2013 to 2016. Although an unbiased analysis if how Russian producers succeeded in turning the tables and quickly saturating the market with their own products would point to the ruble’s sudden devaluation, rendering foreign imports uncompetitive, as had already happened in recent history, rather than to the success of the anti-sanctions.

Whatever the cause of Russia’s newfound food independence, however, it has not lead to food security. Citing the international standard, the authors of RANEPA’s report define food security as “the physical and economic availability of safe nourishment, sufficient for an active, fulfilling life.” In other words, there really are more domestically grown and produced food items in Russia nowadays, but the bulk of the populace has less and less access to them. 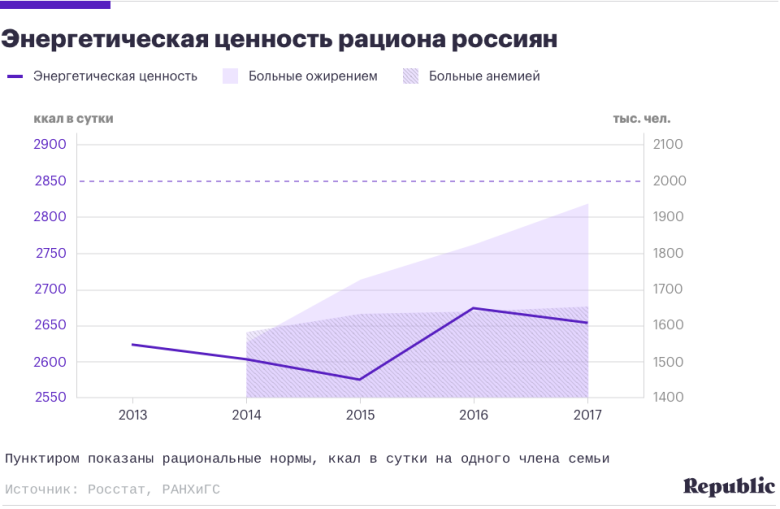 Last year, Russia was ranked forty-first in the Global Food Security Index, compiled by the Economist Intelligence Unit, meaning that it ranked lower than it had in 2013, when it ranked fortieth. This was due, among other things, to insufficient funding of research and a reduction in the variety of food products.

According to official statistics, food accounts for approximately 35% of expenses in Russian household budgets, which is a high proportion when compared with the OECD countries, among which even the highest percentages, achieved by Poland and Mexico, fall short of 25%. Independent evaluation of spending on food, however, claim that the proportion of Russian family budgets spent on food is actually over fifty percent. Given the almost continuous drop in the real incomes of Russians, the selection of products has declined in quality and abundance. On average, Russian households continue to skimp on everything they can do without, as confirmed by the compilers of the Coffee and Milk Index, as published by Romir, a Russian marketing research company. (The index tracks sales of chocolate, coffee, milk, and bottled water.) RANEPA’s researchers noted the discrepancy between the excess fat in the food and bread Russians eat and the low number of calories in their diets.

By closing the borders to imports and showering the domestic agro-industrial complex with generous state subsidies—1.2 trillion rubles [approx. 15.9 billion euros] in the past six years from the federal budget alone—the regime has persuaded itself it has been filling the nation’s bellies and improving its health. Its expectations were exaggerated, however. Oversaturated with cheap carbohydrates, the standard fare eaten by many Russians remains unbalanced and low on energy. “This is borne out by widespread anemia among the populace as a whole and children in particular,” RANEPA’s researchers write. The number of Russians who suffer from obesity has grown for the same reason.

Obviously, these problems cannot be written off as temporary glitches in demand in the domestic food market, whose revival has been unanimously trumpeted by former agriculture ministers and the current agriculture minister. Rather, they are the natural consequence of systemic problems with the natural resources economy that shoulders the burden of the Kremlin’s geopolitical capers. The average Russian family often simply cannot afford a plentiful variety of healthy, high-quality food.

The authors of RANEPA’s report have emphasized this.

“Neglecting this fact can lead to a distorted picture of the state of food security,” they write.

However, there is still very little chance the alarming conclusions of the experts will be heard this time around, forcing the government to make adjustments to its food policy.

* How did they do that? Was a nationwide referendum held? The author, of course, is referring to a so-called public opinion poll in which, at best, a thousand or two “ordinary” Russians were asked loaded questions, to which they gave the “right” answers. {TRR}

Russians spend nearly a third of their household budgets on food. Russia lags behind Montenegro, Latvia, and Turkey in this sense. Russians spend less than seven percent of their budgets on culture and leisure.

According to RIA Rating, as reported by RIA Novosti, Russians spent 31.2% of their household budgets on food in 2017.

The estimate of the percentage of their household budgets people in forty European countries, Russia, Kazakhstan, and Turkey spend on food was based on information from the IMF and national statistics agencies. Russia ended up in the bottom ten of the ranking, ranking 31st. Its nearest neighbors were Montenegro (29.7%) and Latvia (31.7%).

Western European countries topped the rating. Luxembourg came in first place. Residents of the duchy spend a mere 8.7% of their money on food. Close behind Luxembourg were Great Britain (10%) and the Netherlands (10.6%).

The agency also ranked countries according to percentages of income spent on alcohol and cigarettes. Residents of three Balkan countries—Romania (8.2%), Bulgaria (5.1%), and Serbia (4.7%)—spend the most on bad habits. Luxembourg (1.3%), Moldova (1.5%), and Cyprus (1.6%) spend the least on alcohol and cigarettes. Russia ranked 24th: Russians spend 3% of their househould budgets on bad habits.

Sweden was the top-ranked country in terms of spending on culture and leisure: Swedes spend 18.7% of their budgets for these purposes. Moldovans spend the least on leisure and culture: 1.3%. Russia ranked 21st: Russians spend 6.9% of their money in this category.