“It’s kind of a dystopia. In some respects. Of course, it has nothing to do with reality. The world is shrinking and becoming cramped. Something or someone is always offended in close quarters. And there’s always someone pointing a gun at your head. Sometimes it’s you.”

The caste of those deprived of their civil rights — foreign agents, undesirable organizations, extremists of all stripes — will constantly expand. Social stigmatization will be strongly encouraged. The number of persons on different registries and lists, and under police watch will grow exponentially. Legal restrictions — bans on participating in elections, serving on various public councils, founding mass media, attending football matches, working in certain areas, and so on — will be supplemented by defamation campaigns. The separation of the estates in terms of legal and social status will be vigorously encouraged by the authorities.

Source: Pavel Chikov, “Not a Tyranny Yet: A Prognosis for the Rest of Putin’s Fourth Term,” Republic, 19 October 2021. Translated by the Russian Reader 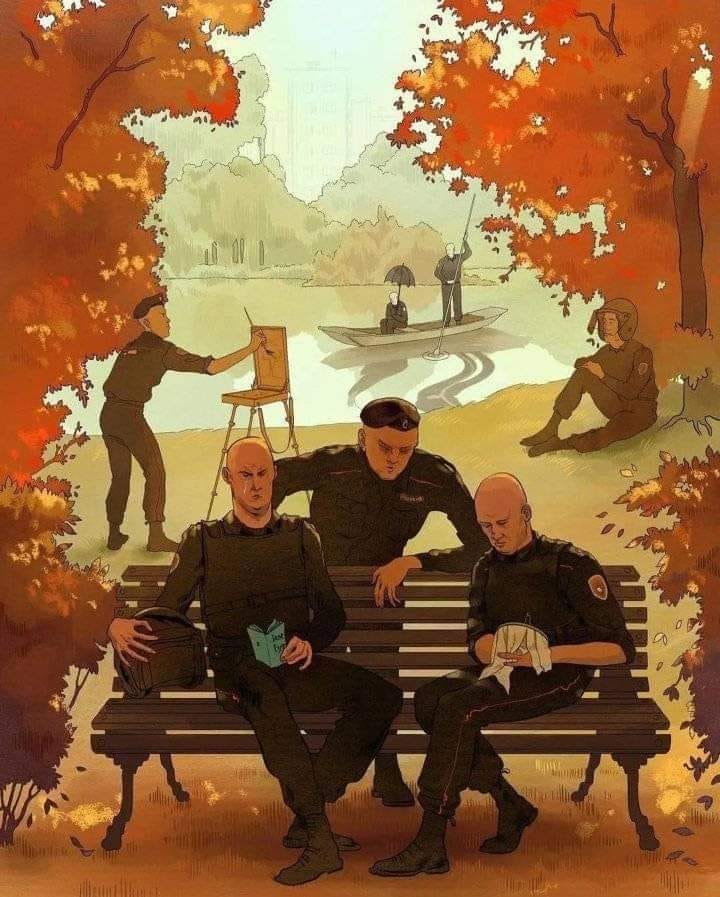 Artist unknown, Russian National Guardsmen in Their Free Time. Posted by Dmitry Vrubel on Facebook. Thanks to Sergei Damberg for the heads-up

Security forces raided a gathering to write letters to political prisoners at the Vogel Bar. They showed up along with Rospotrebnadzor officials for a surprise inspection on the evening of October 24. After managing to tally forty-five people on the premises and not find markings on the floor mats, the officials sealed the establishment prior to a court hearing. The bar’s management fears bankruptcy and plans to open a new bar in a new location. 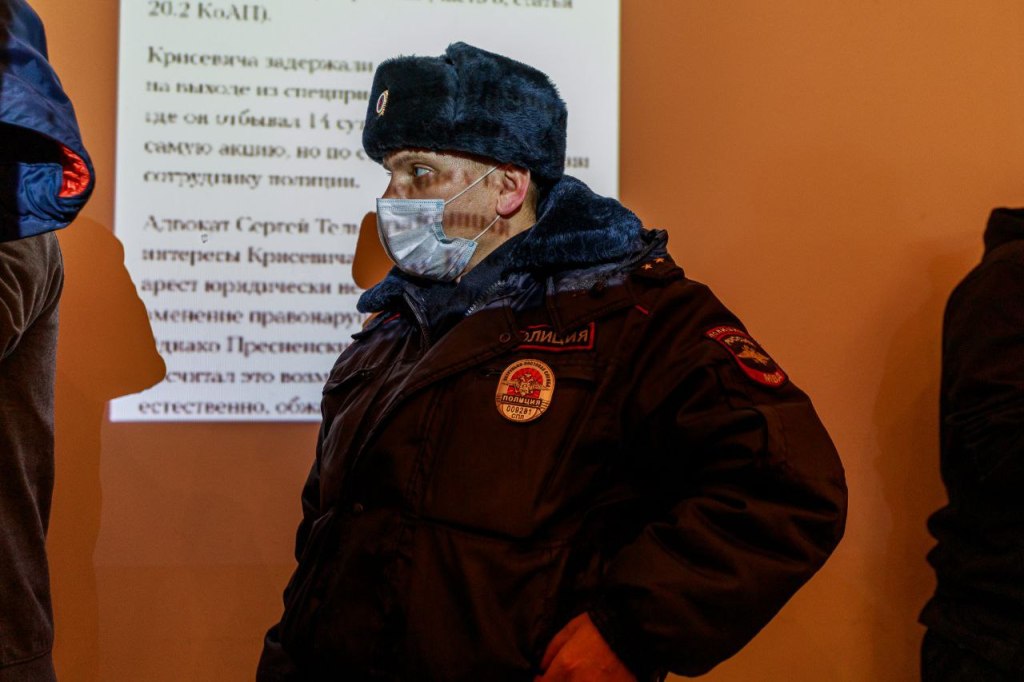 The latest gathering to letters to political prisoners at the Vogel this time ended with a visit by regulatory authorities. The police officers who arrived twenty minutes after the event started immediately stated that the 76th police precinct had received a complaint alleging that the bar was not in compliance with the mask mandate. At that moment, the gathering, at which attendees were to write letters to the performance artist Pavel Krisevich, jailed on charges of disorderly conduct after a performance on Red Square in which he pretended to shoot himself, had just begun. That evening, Krisevich’s friends and acquaintances, as well as former political prisoners, were to speak to the guests. One of the bar’s co-founders, Valentin Khoroshenin, told Zaks.Ru that the complaint claimed that a “meeting of anti-covidniks” was planned for that evening at the Vogel. He believes that this was just an excuse to find non-existent violations and close the bar.

The inspection report indicated that more than forty-five people were present in the room at the time. The bar’s management are adamant that this was not the case. The Vogel’s owners have already studied surveillance camera tapes and counted less than forty people on the premises, including the police officers.

Other violations included the absence of markings on floor mats and an insufficient supply of medical masks. According to regulations, such establishments should have a five days’ supply of personal protective equipment. The available supply was only enough for one day. Rospotrebnadzor officials did not enter the kitchen. According to Khoroshenin, they claimed they were too tired to do so. 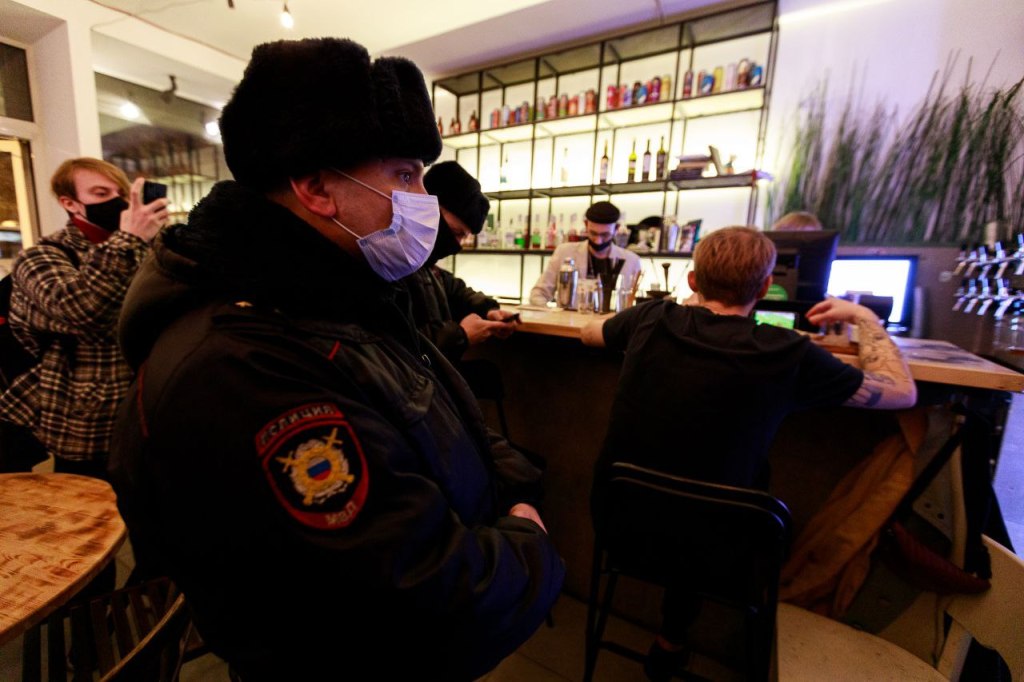 Vogel Bar has been in business since March 2021. From the very beginning it advertised itself as a venue for activists: political lectures, discussions and debates were held there. During this entire time, Rospotrebnadzor never carried out inspections. But the Interior Ministry regularly sent its people there. For example, Center “E” officers attended the debates. The security forces showed up for other letter-writing gatherings, but everything had ended without trouble.

We have been preparing an investigation into torture in Russian prisons for almost a year. It took a lot of time to track down, earn the trust of, and obtain testimonies from former inmates of the penal colony in Krasnoyarsk Krai, Siberia, thousands of kilometers from central Russia. Simultaneously with The Insider’s investigation, Russian human rights activists published an archive of video footage depicting torture being inflicted on prisoners across Russia. The clips, obtained from the FSB and FSIN secret archive, show prisoners from Irkutsk, Saratov, Belgorod, Rostov and other Russian regions being raped, beaten and humiliated. Torture victims explain their torturers’ motives by their desire to break their will in order to obtain material for blackmailing other prisoners, make them confess to crimes, pay tribute, or even to start torturing other prisoners themselves. This all takes place in the modern world, in a country where there is no war, where torturers are not tasked with extracting valuable military information from prisoners at any cost. Torture is rampant in Russia, a country that has signed a number of human rights and anti-torture conventions and seems to enjoy a peaceful life. We have long known that in Russia, prison is not a place of correction, but rather a strange world separate from everything else, where guards and inmates resurrect on a daily basis the practices of the Stalinist Gulag. This has not always been the case. As early as ten years ago there was serious talk in Russia about the need to reform and humanize the penitentiary system. Now things are different. The authorities have been clearly and unambiguously showing how they prefer to rule the country. That is mainly by fear. Investigations into torture have hardly been a revelation, but in a split instant, they made it impossible to ignore torture and pretend it only concerns those behind bars. Of course, the situation will not change overnight, but one thing is certain – this knowledge has now become an integral part of our society. In the following article, we bring you the raw testimony of people who have experienced torture in Russian prisons. They share their thoughts on why it is used, the impact on them, and recount the involvement even of doctors in their ordeal.

Source: The Insider, 19 October 2021. Thanks to Antti Rautiainen for the heads-up