These are two of my favorite snapshots. I’m pictured here with the phenomenally brilliant Babi Badalov at the opening of his show The Cardiff Album at the Freud Museum of Dreams in Petersburg on November 3, 2008. The pictures were taken by the equally phenomenal Sergey Chernov. Below the second photo is the intro I wrote for the show. ||| TRR 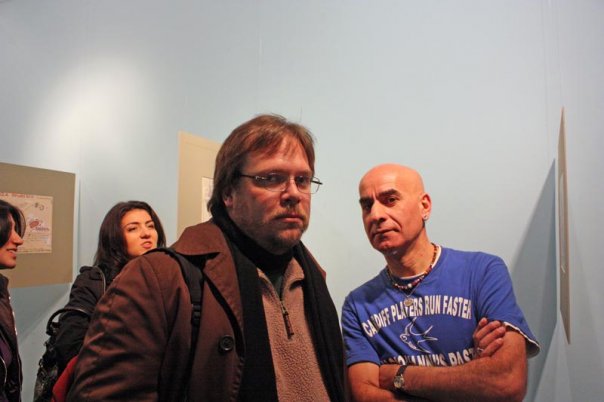 Born in Lerik, Azerbaijan, in 1959, Babi (Babakhan) Badalov is a living embodiment of cosmopolitanism’s dark and spontaneously convivial underbelly. In his world, people do not travel from one country to another with polished ease, flashing their passports to the guards as they pass effortlessly through frontiers and effecting the shift from one language to another with fluency and grace. On the contrary, when you are a refugee, exile, migrant worker or itinerant artist, you manage these transitions as best you can, mangling the new idioms you learn and fusing them with half-remembered tongues you picked up along the way, mingling them with memories of a mother tongue that never matured into adulthood because at a tender age you left your mountain village for the capitals, where encounters with countrymen were few and furtive and somewhat beside the point. In the provincial capital, you learned the official language of artificial nationhood along with the (un)official language of the anti-imperial empire, neither of them your own, both of them suspicious (of you and of themselves). This was violence to be sure, but you turned this violence back upon itself, never fully learning any of these codes well enough to pass for a native. Nativity, after all, is naïveté, an identification both outwardly enforced and grimly self-willed. For an artist, whether of life or the brush, submitting to too many of these identity checks means submitting to kitsch and cliché.

Of course you submit to these as well—you cannot help but submit: you are an artist, not a fighter—but when you succumb you always go too far, giving the lie to the endlessly tautological chains of self-identity that pass for human speech, which, as Lacan and others tell us, is the inhuman machinery that undergirds and overdetermines our visibly silly search for selfhood. You do not need Lacan to tell you this, though, because you are confronted daily with its external effects, masked as real people in real lifeworlds, who are kind or cruel or indifferent but rarely anything other than language machines. In your poems, you disassemble these machines, heap their parts into great, disorderly piles, and then begin putting them back together in defiance of common sense and good taste and the rules of art. It is worse than that. You get the words all wrong: you pronounce them with the wrong accent; you confuse tenses, case endings, conjugations, and registers. You use, illicitly, the Latin alphabet when you write in Russian, and most of your Russian texts are chockablock with English. When you declaim your poems, whether aloud, in a smoke-filled room crowded with alcoholic crypto-nationalists, or with paste and scissors, as in your collages, it is hard not to escape the impression that a faulty robot has arrived from the island of misfit toys to tell us something we would rather not hear—that all our projects of empire- and nation-building have failed.

Your art is political, personal and politically (in)correct. This is what Adorno meant by the autonomy of art, but if he had met you he probably would have turned away in horror, as he did when his well-meaning German students enjoined him to join them on the barricades.

You ask us to join you on the barricades, but what does solidarity look like from there? It looks like this. For years, you live in wretched conditions in a magnificent squat in the middle of Petersburg. Outside, in the square, stands a monument to the greatest African-American poet of them all, Alexander Pushkin. Your comrades-in-arms are artistic scapegrace outlaws, and their ambitiously unambitious version of conviviality will finally lead to their tiny island’s recuperation by the new powers that be, for whom art is just window dressing for real estate and financial speculation. So when this experiment in direct democracy goes awry, you are induced by your family to return to your “homeland” of Azerbaijan and live the straight life. This is almost too much for me to imagine: for me you are the gayest man on the planet, in all senses of the word. When this becomes unbearable, you use the second half of a double-entry visa to make your way to England, that green and pleasant land that would have been a much duller place throughout its history without adventurers like you.

But you plan this particular adventure all wrong, just as you write poetry the wrong way. You declare asylum as soon as you arrive, but in the New Labour UK—in the midst of a war on terror that has also opened a front running straight down the middle of the country—you are treated both as a potential combatant and an obscure object of bureaucratic desire. At the first asylum center (prison) to which they send you, a riot—complete with helicopters, media coverage, and armored police—breaks out. When you tell the story later, it is quite funny, though of course there is nothing funny about it. After a grand tour of Britain with brief sojourns in another few such oases, your case is officially accepted for review and you are dispatched to Cardiff, where you are given a tiny stipend and a council flat. It is all very civil, except for the weekly check-ins with the UK Border Agency, the more or less constant threat of deportation, and the grinding poverty. That does not faze you, however; or rather it does, but you turn that fazing into art. What kind of art? Dolls made from scraps of fabric; dogs fashioned from Wellington boots; and “visual poems” patched together from clippings and other printed detritus, embroidered with whorls of off-kilter, ham-fisted linguistic ravings, and asylumed on the pages of an old photo album you pick out of a rubbish bin.

This is the Cardiff Album, the diary of your journey through the underside of UK immigration policy. You are the Persian Ambassador (a role you played at an evening in solidarity with Salman Rushdie held in the former Persian embassy in Petersburg in 1995), but the marvels you record on your visits to strange lands look like nothing so much as the end of history having its revenge on the last romantics. Your ambassadorial credentials are recognized only by a ragtag band of Welsh anarchists who make your case their cause célèbre, even though you are a celebrity only in the minds of the people you have stitched together in your wanderings and in “alternative” Azeri news outlets starved for news. When it looks certain that you will be deported, the first half of this inoperative community begins bombarding bureaucrats, parliamentarians, and airline officials with faxes, letters, and e-mails. I have not seen you in years, but I would rather not see you again in such circumstances, so I spend half an hour on the phone telling a Pakistani (or was he Bangladeshi?) call center operator that he should not be party to this horrible crime against human freedom that his airline is about to commit. I tell him to get up from his desk and leave work. What right did I have to tell him that? Rights are not given, they are taken. (Did Bakunin say that? Or was it Kropotkin? Or perhaps it was Gorky? Or maybe no one said it?)

Much as I would rather not seen you again, see you I do a couple days after my stupid conversation with your cleverer immigrant non-brother. You and I have nothing in common, just as no one really has anything in common with anyone else. It is too bad that more people do not realize this sad, happy fact. If more people did, they might actually be able to begin making something in common.