I was at my neighborhood cinema last night to watch a real movie made by a real filmmaker: Aki Kaurismäki’s 1996 film Drifting Clouds. When I was exiting the lobby and box office to go home I picked up this flyer. 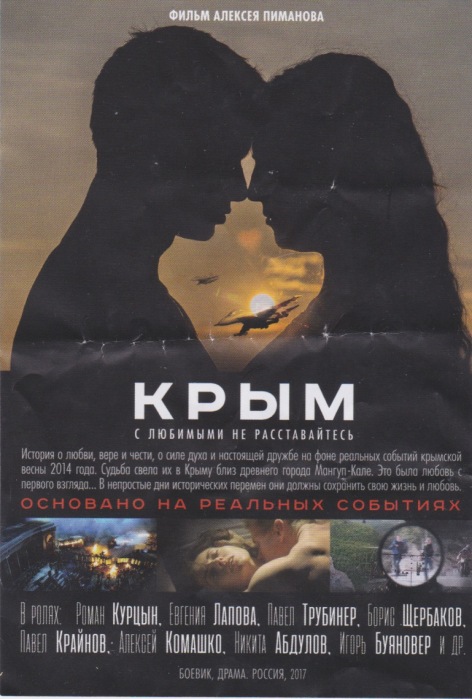 An Alexei Pimanov film. Crimea. You don’t leave behind the ones you love. A story of love, faith, honor, spiritual strength, and genuine friendship, set against the backdrop of real events of the 2014 Crimean spring of 2014. [Sic] Destiny brought them together in Crimea near the ancient city of Mangup Kale. It was love at first sight. In a difficult time of historical change, they must save their lives and preserve their love. BASED ON REAL EVENTS. Starring Roman Kurtsyn, Yevgeniya Lapova, Pavel Trubiner, Boris Shcherbakov, Pavel Krainov, Alexei Komasko, Nikita Abdulov, and Igor Buyanover

Crimea even has a trailer!

A few overloaded tablespoons of love and sex, “breathtaking views” of the Crimean landscape, a maudlin soundtrack, a few awkwardly choreographed shoot-’em-ups, “riots,” and cavalry charges to save the good guys (Russians) from the bad guys (“fascist” Ukrainians) is a sure-fire recipe for a film that will have Russian viewers rushing in droves to see this latest cinematic masterpiece like flies on sherbert.

Not to mention it’s an easy way to continue the furious rewriting of history that has been going here almost since Putin took power in 1999.

But since it seems designed for the especially gullible and people who have never see a real movie before and thus cannot distinguish cinema from propaganda, I’m almost certain Crimea will be a boxhouse flop, like most other “patriotic” films in recent years, doomed to go into heavy rotation on second-tier Russian TV channels, where it will comfort alcoholics, the bedridden, and insomniacs in the mid-afternoon and two in the morning for a year or two before it’s shelved till kingdom come. TRR