1. Manifesta 10 is the most law-abiding art biennial ever held and ingratiating to a fault with the “conservative part of society” (i.e., drooling fascists).

Despite all the fears, despite the cautious attitude of the museum сommunity and the conservative part of society, all three programs, all the exhibits in these programs are fully consistent with the laws of the Russian Federation. Moreover, at the opening of the Biennale [State Hermitage director Mikhail] Piotrovsky paid special attention to this point.

We had a legal consultation with our lawyers. And nothing presented at Manifesta violates the laws of the Russian Federation.

(The segment in question starts at the 2:40 mark.)

2. Manifesta 10 is an oasis of total, uncensored political freedom endorsed by the entire Russian LGBT movement.

After her, Hedwig Fijen, who came directly from St Petersburg where she was responsible for Manifesta for which she has been a director for since quite some time. Like we all know, Manifesta has been bombarded with an enormous amount of critique for being situated where it is this year, in Russia, in St. Petersburg and in the Eremitage [sic] . She mentioned how none of the artistic projects had been in any way been object of political pressure and that there had been internal discussions all along the process about staying or leaving Russia and the decision to stay was not taking lightly nor naïvely. She mentioned that the LGBT-movement in Russia had wanted them to stay to avoid further isolation and to keep an open channel, and that in the end, with all the talk about boycott, only three artists decided to withdraw from participating in the biennial. Kaspar [sic] König was in the audience, but never said anything.

(Thanks to Comrade CLA for the second part.)

P.S. The last lines of that TV report are priceless (and cheaply prophetic):

Like Petersburg once upon a time, Manifesta is a window, only now it works both ways. The shutters will close on October 31. 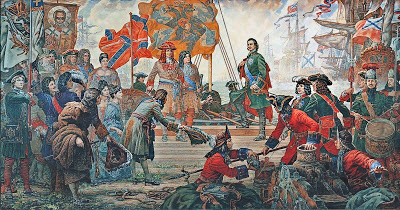