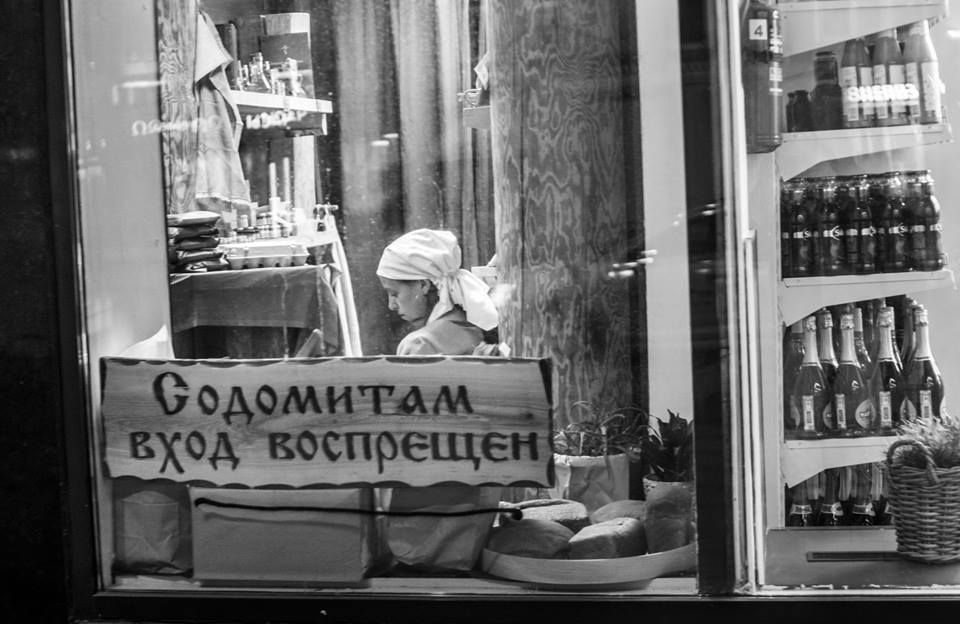 “No sodomists allowed,” Tverskaya Street, Moscow, 14 November 2017. Photograph by Vadim F. Lurie. Thanks for his permission to reproduce it on this website

June 12 is a public holiday, Russian Sovereignty Day [sic]. Certain people have been trying to use our national holiday to destabilize the situation in the country. Alexei Navalny has called for Russians to take to the streets of their cities in protest against the current regime.

The administration of Saint Petersburg State University of Film and Television asks you to approach the question of involvement in such events responsibly, not to yield to such calls and other provocative proposals whose objective is inveigle young people in unauthorized mass actions and marches aimed at destabilizing public order, calls and proposals that are transmitted via social networks and other sources of information. We cannot let these people achieve their political ambitions illegally.

Thanks to Comrade VS for the heads-up

So, 658 people were detained [in Petersburg]. Minors whose parents were able to come and get them and people with disabilities have been released. Nearly everyone else will spend the night in jail.

There will be court hearings tomorrow. Everyone who can make it should come. The hearings will take place at the Dzerzhinsky District Court [in downtown Petersburg]. The first detainees are scheduled to arrive at the court at 9:30 a.m. Considering the number of detainees, we will probably be there into the night.

Alexei Gaskarov
I was invited to speak at the rally on Sakharov Avenue. I planned to talk about why it was important to support the anti-corruption campaign despite our political differences. In short, in order to put a stop to reaction, dissenters need to be represented on a massive scale, so the elites would not even think about just trampling them or not noticing them.  Everyone has the same goal right now: resurrecting political freedoms. The contradictions among people are secondary. Considering the scale of protests nationwide, things turned out quite well. You can see that people have stopped fearing crackdowns, and that intimidation no longer works. In Moscow, switching the rally to a stroll down Tverskaya was an absolutely apt response to the Kremlin’s behavior. Everyone who wanted to avoid arrest had the chance to do that. There were downsides as well, but given the colossal confrontation, they don’t seem important.

Ilya Budraitskis
Of course, one cannot help but welcome today’s protests on a nationwide scale. We are witnessing the continuing rise of a new protest movement that emerged on March 26. This movement is indivisible from Alexei Navalny’s presidential campaign and owes both its virtues and weaker aspects to that campaign. Despite the fact that Navalny’s campaign could have launched a broad grassroots movement, on the contrary, it has been built like a personalistic, vertical political machine in which decisions made by a narrow group of experts and approved by the leader are mandatory for the rank-and-file. This raises the majority’s political consciousness to the degree necessary at each specific moment of the campaign. The leader’s political strategy, his objectives, and the meaning of decisions are not up for discussion. Navalny must be believed like a charismatic CEO. What matters is that he is personally honest and “he has a plan.” On the eve of the protest rally, authorized for June 12 in Moscow, the rank-and-file found out a new particular in the plan: everyone had to go to an unauthorized protest march, which would predictably end in arrests and criminal charges along the lines of the March 26 protests. The rationale of the organizers is understandable. They have to pull out all the stops to keep the campaign moving at a fever pitch, keep it in the public eye, and use the threat of riots to pressure the Kremlin. Moreover, this radicalization in the media reduces the complicated picture presented by Russian society to a simple confrontation: the thieves in the Kremlin versus the honest leader who has united the nation. This set-up renders all forms of public self-organization and all social movements secondary and insignificant, and their real interest ultimately boils down to making Navalny president. However, even Navalny’s most dedicated supporters should pause to think today, the day after June 12. Would his campaign be weakened if it were opened up to internal criticism, if horizontal discussions of his political program and strategy were made possible, and the political machine, now steered by a few people, turned into a real coalition, where differences did not get in people’s way but helped them agree on common goals?

Anna Ivanova
“Sakharov Avenue is out,” Navalny said in his morning video message.

“The hypocritical scum who dreamed up the ‘opposition rally on Sakharov’ will fry on a separate frying pan.”

The rally on Sakharov happened anyway. It was mainly attended by opponents of Moscow’s new law on the large-scale renovation of residential buildings: urban activists and residents of the buildings slated for demolition, as well as defrauded investors in residential building projects, foreign currency mortgage holders, and other victims of the construction sector. Many fewer of them came out, however, than on May 14, even considering that some of the outraged Muscovite anti-renovation protesters followed Navalny over to Tverskaya. Protests rise and ebb like the sea, and this time round the excitement was muted. These people—old women, families with children, old men—were not suitable for getting arrested at an unauthorized protest. Although they realize that Moscow’s problems are merely one logical outcome of the Russian political system, they are in no hurry to support Navalny and other inveterate oppositionists, for what is at stake are their housing and property, not supreme civil liberties.

Meanwhile, on Tverskaya, young folks realized that A.C.A.B. Around 700 people were detained in Moscow, and the social networks were flooded with even more photographs of derring-do amidst the so-called cosmonauts [riot cops]. The ultimate damage from the protest might be acknowledged only over time, when we know whether there will be new criminal cases, and if there are, what charges are laid against the protesters. But everyone loves looking at riot porn (and being involved in it), although this hobby devastates and dulls the senses as much as watching ordinary porn. This is the danger of protests “for all things good,” of protests focused on a certain political agenda or figure: neither fat nor thin, neither old nor young, neither socialist nor nationalist, but generally sweet and better than the old protest rallies. In this case, protest risks degenerating into a social order in which everything is decided by Sturm und Drang. Not the worse prospect, some would argue, but others would argue it would be a disaster. But whether you like it or not, “Russia has thousands of young people dreaming of revolution,” for the time abstractly encapsulated in the slogan “Dimon must answer for his actions,” and they have been taking to the streets.

Two worlds did not in fact meet in Moscow today. One world is the world of people who are mostly old, people whose property is threatened with eminent domain and who imagine politics as a way of building an urban environment. The second world is the world of bold young people (and their slightly older idols), who are hellbent on regime change. It would not be a bad thing if these worlds met and acted in concert. This is the only way for a democratic politics to emerge from this.

Notes from the field (the Field of Mars). Putting aside emotions:
1. It’s true there were lots of young people. And they are not afraid of anything.
2. There were many young families, who are likewise not afraid for their children.
3. “We’re fed up” is the key phrase.
4. There were slogans about healthcare, infrastructure, and pension. Well, and about corruption, too.
5. The out-of-town students came out because “it is wrong to drive the regions into a pit like this.”
6. There was a sense of support and public acceptance.
7) The people who came out were true patriots genuinely worried about the country’s future.
8) A spirit of freedom . . .

P.S. On the Six O’Clocks News last night, BBC Radio 4’s Moscow correspondent had the temerity to refer to yesterday’s protest march on Tverskaya as “illegal.” Is this the new tariff for keeping one’s press accreditation under Putin’s perpetual reign? TRR