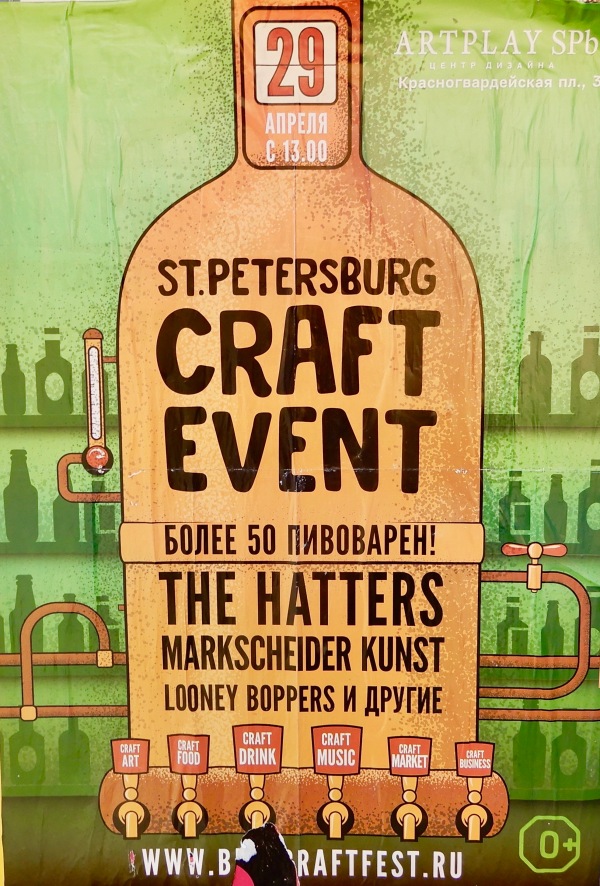 There are eleven Russian words in this poster for the April 29 St. Petersburg Craft Event at Art Play SPb, and twenty-one English words. Photo by the Russian Reader

Oh, how they hate the United States!

My boon companion was just chatting with a neighbor lady, a woman who has lived in our building her whole life and makes the best salt pickles I have ever tasted.

As it happens, our neighbor is friendly with a member of our municipal district council.

If you follow the news from Russia closely, you would know that the beleaguered united opposition, led by Dmitry Gudkov, made significant inroads in Moscow’s municipal district councils during the last elections to these entities. One of the people thus elected, the young, well-known liberal politician Ilya Yashin, has now announced plans to challenge the incumbent, Sergei Sobyanin, during the next Moscow mayoral election.

In reality, municipal district councils are the lowest rung on the political totem poll in Russia. They have very little power and are perpetually too underfunded to do the work they are supposed to do.

However, since Russia’s ruling party, United Russia, is power hungry and paranoid, they try and stack the lowly municipal district councils with their own members.

God knows what could happen otherwise.

The municipal district council member with whom our neighbor is friendly is one such United Russia Party placeholder.

“And she’s a real louse,” my boon companion would add.

The councilwoman recently got back from a trip to the United States. It turns out her daughter and son-in-law have lived there for a long time. They have a big, beautiful house in Silicon Valley.

The councilwoman told all this to our neighbor lady, explaining how much she had enjoyed the trip and how much she liked the United States.

“Why did she have to tell ME this?” the neighbor lady asked my boon companion, “Why couldn’t she have told someone else?”

Remember this little story the next time you see Foreign Minister Lavrov or President Putin or the Russian Ambassador to the United Nations or Russian Foreign Ministry spokeswoman Maria Zakharova huffing and puffing and blowing America’s house down.

Everything they say is meant for domestic consumption only. They don’t really hate the United States. They just need a Big Enemy to occupy the minds of the Russian people, to distract them from their own more serious crimes and misdemeanors.

The con seems to be working so far. // TRR 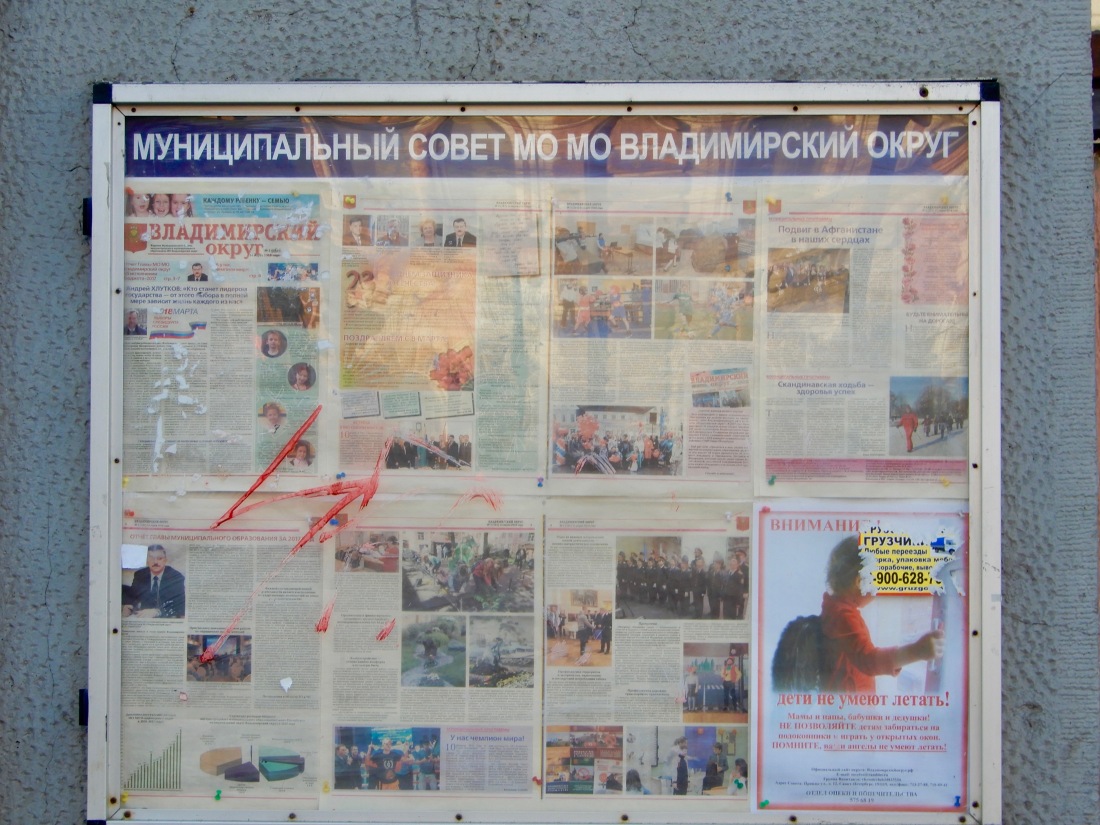 I was just unfriended on Facebook by an actual friend and comrade, and a person for whom I have boundless respect. Apparently, I said too many bad things in electronic print about their chosen candidate for president, Dr. Jill Stein of the US Green Party.

In point of fact, I wrote to them on Facebook just yesterday that I would rather vote for them or just about anybody else in the world than for someone who had no qualms about flying to Moscow to celebrate RT’s birthday and sitting at the same table with Vladimir Putin.

Similarly, Dr. Stein had no qualms about saying that Russia had once “owned” Ukraine, so, like, what’s the big deal about grabbing Crimea and messing with Donbass?

Pro-Putinism of the Steinerian or Trumpian variety should be a make-or-break issue if you call yourself a democrat, a leftist, a left-liberal, an anti-imperialist, an anti-fascist, a progressive, pro-labor, pro-human rights, a pacifist, a democratic socialist, a socialist, a communist, a liberal, a republican or (in fact) a conservative.

On the merits of his now very long stint in office, Putin should appeal only to extreme right-wingers, dyed-in-the-wool fascists, neo-Nazis, racists, and massively deluded fundamentalist Christians (because Putin isn’t actually spearheading a worldwide revival of “conservative Christian values”; he is just using the Church and the churchly to advance his own personal and political ends), as well as members of various organized criminal groups around the world, who probably can’t help admiring how a “party of crooks and thieves” have taken over an entire country, the world’s largest, and started running it like the mob runs a chunk of turf on the Jersey shore.

Oh yes, and Bashar Assad loves Putin. And Silvio Berlusconi does, too.

So this is a US presidential election in which all the choices are very bad? Then please, at least don’t imagine one of the candidates has qualities she really doesn’t have, and please don’t whitewash or blatantly ignore her glaring deficiencies.

Being “soft” on Putin is a damning quality, because it means (as has become clear from Dr. Stein’s limp, weasel-worded response to the open letter written by the brave, exiled Russian environmentalists Yevgeniya Chirikova and Nadezhda Kutepova) you feel no solidarity with the thousands, hundreds of thousands, and maybe even millions of Russians who have either fought back against Putin’s seventeen years of tyranny or suffered very badly from it.

It also means you have funny ideas about “effective leadership,” as Trump seems to have. Just as Trump is probably no great shakes at “business,” his idol Putin is actually a crummy politician when it comes to implementing any of the things held dear by the sort of people, who occupy most of the known political spectrum, I listed above. In fact, he is slowly leading his country to economic, social, moral, environmental, industrial, aesthetic, and ideological ruin.

Or it means you have funny ideas about “world peace” and “imperialism.” Meaning, you think only the US, NATO, and EU are imperialists, while Russia, China, the other BRICS countries, and more or less the rest of the world are, mysteriously and without having done much of anything to merit the merit badge, “anti-imperialists.”

I am going to go out on a limb and say (without arguing the point further here) that while Russia has the most going for it in terms of natural and human resources, it is the BRICS country least likely to succeed because of its ruinous, criminal governance. I have more confidence that South Africa and India will turn things around than I do Russia will.

And China has lots of “negatives,” as they say about the candidates these days, but despite them I never get the sense the country is run by haughty criminal lunatics. Or maybe the Chinese Communist Party are haughty and corrupt sometimes, but they seem to have a plan of sorts and are capable of rational thought and acting collectively (and dictatorially) to advance rational interests, whether or not those rational interests are ones their own people or the people of Hong Kong or Taiwan or we ourselves would approve.

When a candidate is soft on Putin, it doesn’t mean she or he is unqualified to lead the US military-industrial complex or “advance our country’s interests” by attacking countries no one asked us to attack. 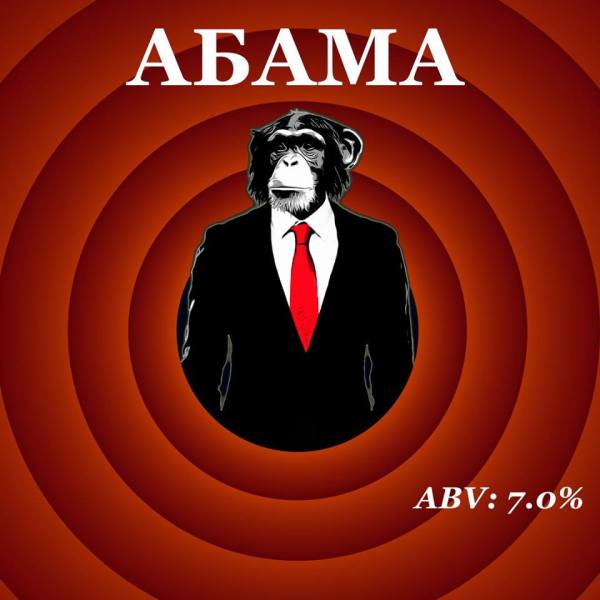 Apropos the article below. Pobrecitos! Thank God no one in Russia has been trying to tarnish the image of the US or its less-than-effective president. That would be so uncool. Image of the label for Abama craft beer, produced by a microbrewery in Putin’s hometown of Petersburg, courtesy of Comrade EO

Using the topic of Russia and the Russian president in the US presidential campaign is an attempt to manipulate public opinion within the country, said Vladimir Putin. According to him it is an attempt to “recreate the image of an evil empire.”

Speaking to journalists at the end of the CIS summit in Bishkek, Russian President Vladimir Putin commented on the use of Russian topics in the US election campaign.

Putin expressed the hope that the “use of Russia and the Russian president” in the US election campaign was “was also due to Russia’s growing influence and significance.”

“But I think it is mainly due to attempts to manipulate public opinion within the country. We are witnessing an attempt to recreate the image of the so-called evil empire and scare the average citizen. It is quite sad. It is a fairly crude attempt and counterproductive,” said the Russian president [sic].

Replying to a question about which of the candidates he supported in the US presidential elections, Putin said he had “nothing new” to say.

“We support anyone in any country who wants to work towards neighborly relations and partnerships with us,” he stressed.

“We are sympathetic to those who speak out publicly about the need to build relations with Russia on an equal basis and see a lot of sense in this for their country,” Putin concluded.

Trump also predicted he would have “very, very good relations” with Putin if he became president.

Trump’s statement was criticized by US President Barack Obama, who supports the Democratic candidate Hillary Clinton.

Clinton herself had earlier accused the Russian secret services in the attacks on the Democratic Party’s servers. She has also commented on an article in the Washington Post, claiming that Russia was possibly planning to disrupt the US elections. She said it was a serious threat that had to be eliminated quickly.