My neighborhood in the former East Berlin harbors some of the last anarchist squats in the city. All the dogs here go for walks without a leash. The odor of marijuana lies heavy in the air. And the sharing economy is practiced as a matter of course.

This means that when someone decides to get rid of something that someone else could use, they often as not set it out on the pavement for the taking.

In this way, several valuable finds have come into my temporary possession.

What I found while we were strolling the neighborhood yesterday, however, was a gift beyond price, and yet it was completely free, to rephrase a line from Rush’s greatest song, “The Spirit of Radio” (1980).

Rush recorded all of their best records during the Cold War, whose moral and intellectual tenor were palpable in Neil Peart’s hippy libertarian fantasy mini-epics, sci-fi short stories, and sonic sermons on the virtues of freedom and individualism.

I was a Rush fan from an early age, but little did I know that as Rush were in Toronto composing and recording the soundtrack of my adolescence, a company called SPI (Simulations Publications, Inc.), headquartered on Park Avenue South in Manhattan, was churning out extraordinarily complicated “conflict simulation” games by the hundreds.

Many of SPI’s conflict simulations were based on historical battles and campaigns, ranging from the Battle of the Bulge and the Battle of Austerlitz to “fantasy & science fiction games” such as Invasion: America—Death Throes of the Superpower and (in the interests of “balance”) Objective: Moscow—The Death of Soviet Communism (“A hypothetical invasion of the USSR by a world coalition”).

Oddly, the first game retailed for $18, while the second cost $27, a decent chunk of money at the time, considering SPI’s target market and the fact that their games consisted of lots of instructions, charts, tables, diagrams, maps, playing pieces, and game boards, all of them printed on cardstock and heavy paper, not on embossed cardboard, etc.

In 1977, when I was ten, and the Cold War informed most of the zeitgeist one way or another, SPI released a remarkable conflict simulation entitled Fulda Gap: The First Battle of the Next War.

Yesterday, I found what looks to be a completely intact, serviceable specimen of Fulda Gap in a cardboard box along with other things clearly left there for the taking by a kindhearted Berliner.

My first impression of Fulda Gap is that it is a thousand times more complicated than the actual Cold War was. The “Rules of Play” alone run to sixteen pages.

Fulda Gap also features three sets of “Charts and Tables,” a large folded sheet containing a “Turn Record/Reinforcement Track” on one side, an “Untried Unit Table Analysis” on the reverse, and, of course, a foldout map of West Germany and East Germany where, apparently, the main action takes place and the players pretend, variously, to invade West Germany or fend off the cunning, treacherous Reds. 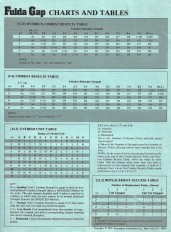 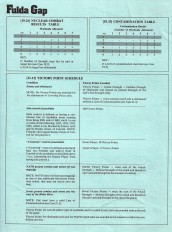 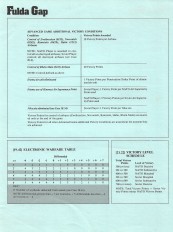 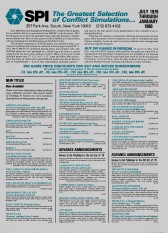 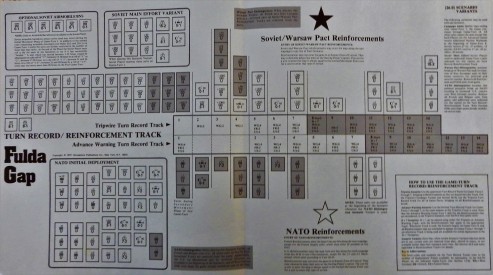 Finally, Fulda Gap contains what SPI’s mail order catalog of its other games honestly identifies as several hundred “die-cut cardboard playing pieces […] packaged in ziplock bag[s].” The playing pieces are printed with such arcane combinations of numbers, letters, and symbols that it is easier to imagine they have something to do with the Kabbalah than with all-out warfare between NATO and the Warsaw Pact.

If I were a contemporary artist I would stage a performance involving Fulda Gap in one of the ex-Cold War settings and current Cold War memorials with which Berlin teems.

If I were a real gamester I would just find a few other comrades, figure out how the game works, and play it.

In any case, I would appreciate your comments, suggestions, and reminiscences about Fulda Gap and SPI’s other remarkable products, as well as information about the company and the people who produced its games. {TRR}

UPDATE (10 May 2020). Reader Steven Lohr has sent me an invaluable comment about SPI and its founder, Jim Dunnigan. Thanks, Steven!