Yesterday, August 8, 2015, Democratic Petersburg held a series of solo pickets on Nevsky Prospect, near the preserved WWII street warning sign that reads, “This side of Nevsky Prospect is the most dangerous during shelling.”

A protester holds a placard featuring an image of Tanya Savicheva, a young girl who recorded the deaths of her family members during the Nazi Siege of Leningrad in the Second World War. Savicheva herself died from intestinal tuberculosis in 1944, two years after being evacuated from Leningrad. 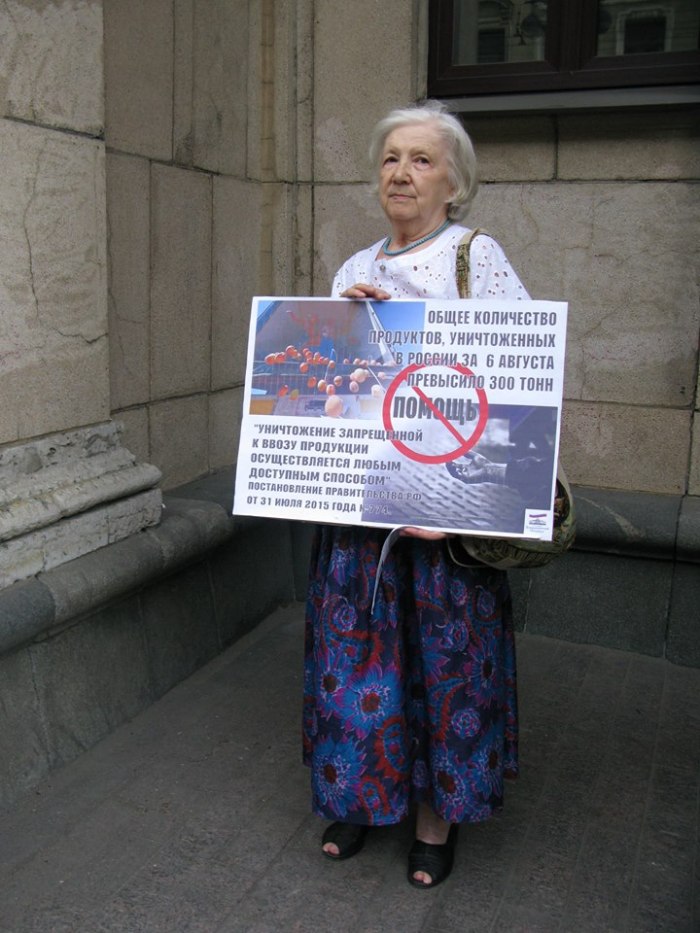 The total quantity of produce destroyed in Russia on August 6 exceeded 300 tons. “The destruction of embargoed products is implemented by all available means.” Russian Federal Government Decree No. 744, dated July 31, 2015

In the difficult social and economic circumstances, destroying produce is a crime against the citizens of Russia. Russia in 2014 (according to preliminary statistics from Rosstat): 16.1 million people earned less than the minimum subsistence level, and 22.9 million people lived on the brink of poverty.

Destruction “by all available means.” Is this gratitude?! Between January 2 and January 9, 1991, 21,400 tons of foreign food aid were delivered to Saint Petersburg.

Source: Alla Repina (Facebook). Thanks to Comrade ASK for the heads-up

[Russian] producers have mastered technologies for producing sour cream from soybeans, caviar from seaweed, and even meat pasted together from scraps as ably as producers in other parts of the world. According to Rosstat, Russia imported thirty-seven percent more palm oil in January and February of this year than during the same period last year. At the same time, domestic production of milk fell by nearly two percent, while the production of the “cheese” grew by approximately thirty-three percent. The experts have concluded this means the volume of counterfeit products has grown along with the increased production of cheese products.

The companies engaged in this business are the very same “domestic producers” whose profits are the cause of the comedy with the produce crematoria on the border. To assure yourself this is the case all you need to know is that the man who encouraged Putin’s decree, agriculture minister Alexander Tkachev, is a major latifundista. (Some label him one of the largest landowners in Europe.) Relatives of the former governor of Krasnodar Krai own 450,000 hectares of farmland. When they speak of defending Russia’s economic interests, they are talking about defending the sharks of Russian agrobusiness from foreign competition, not about the welfare of consumers, the plight of the poor or the salaries of farm workers. How import substitution has affected the condition of farm workers can be seen from the Timashevskaya Poultry Farm (the largest poultry producer in the Samara Region), where an attempt by workers to organize an independent trade union has met fierce resistance from the farm’s prosperous owner.

Of course, the destruction of produce appears cynical given that seven percent of Russians suffer from chronic malnutrition, an even greater number of people have been forced by the crisis to save on food, and there are three to five million homeless people, of whom over fifty thousand are children. However, the reaction of public, who have demanded the confiscated produce be given to orphanages or sent as humanitarian aid to Donbass, is insufficient, despite its moral validity. To deal with the social consequences of the crisis, what we need are not random acts of charity but consistent policies of redistributing incomes, defending jobs, and providing assistance to the poor. We must introduce progressive taxation, provide citizens with social benefits on which they can live, index pensions and wages, and regulate the labor market and prices of essential goods. In other words, we have to reject neoliberal policies that deliberately lead to the destruction of the welfare state. The issue of social welfare should not be an appendix to Internet discussions of the plight of Spanish ham and parmesan, but the central point in the agenda of all opposition forces claiming popular support.

Meanwhile, as bloggers crack jokes about the cheese Auschwitz at the Russian Customs Service, the government is preparing a draft budget for 2016–2018. It provides for measures such as raising the retirement age, reduction of the number of free tuition spots in universities, higher taxes and charges on ordinary citizens, a freeze on social benefit payments, and a refusal to index pensions, benefits, and teachers’ salaries. The specter of austerity has risen in Russia. Against this truly ominous threat, the games at customs appear to be nothing more than a red herring. 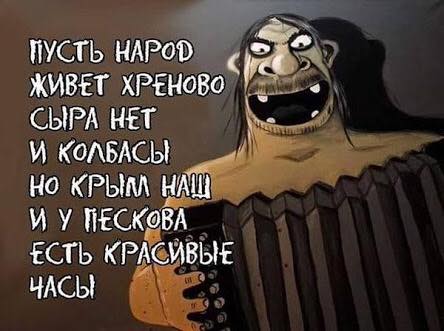 “So ordinary people live like crap / And there is no cheese and sausage / But Crimea is ours, and Peskov / Has a beautiful watch.” Cartoon by Vasya Lozhkin

Deportation of Crimean Tatars Remembered in Petersburg
David Frenkel
Special to The Russian Reader
May 20, 2015

On May 19, Petersburg democracy activists commemorated the Soviet Stalinist government’s mass deportation of Crimean Tartars on May 18, 1944. Activists held a series of solo pickets on Nevsky Prospect before gathering for an evening event at Open Space, a co-working venue run by the organization St. Petersburg Election Observers.

Several activists, including Vsevolod Nechayev, leader of the Democratic Petersburg coalition, Andrey Zyrkunov of the liberal-democratic party Yabloko, and Igor “Stepanych” Andreyev, a famous local activist, took to the city’s main street with placards calling on fellow citizens to remember the anniversary of the deportation and blaming the current Russian authorities for preventing commemorations in Crimea itself.

Local activist Igor “Stepanych” Andreyev picketing on Nevsky Prospect, May 19, 2015. His placard reads, “Stalin’s deportation of the Crimean Tatars is a crime with no statute of limitations! A people’s memory cannot be murdered! Even according to the NKVD’s statistics, 44,887 deportees from Crimea died in 1944–1945.”

Apparently inured to pickets and demonstrations of various kinds, passersby mostly exhibited indifference. A couple of young men attempted to harass the protesters, but most passersby merely glanced at the picketers before continuing on their way. 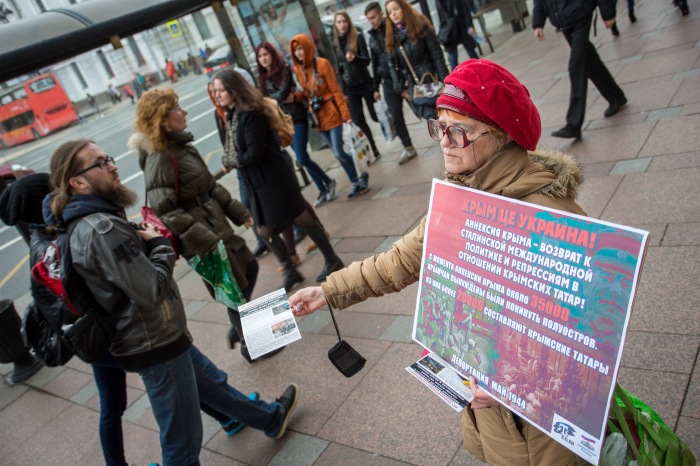 Picketer handing out leaflets on Nevsky Prospect, May 19, 2015

In the evening, activists gathered at Open Space to continue their commemorations. Alexandra Krylenkova, leader of St. Petersburg Election Observers, is field coordinator of the Crimean Field Mission on Human Rights.

Activists viewed a documentary film about the deportation and chatted with Asan Mumdzhi, a member of the Crimean Tatar community in Petersburg.

They also talked via Skype with Zair Smedlya, head of the Qurultay of the Crimean Tatar People. Smedlya described the current situation in the Crimea. Police arrest protesters en masse even at authorized protests and auto rallies, but generally the authorities refuse to grant permission to hold such events.

“The same old story,” muttered someone in the audience.

The current Crimean authorities have tried to turn the commemoration of the 1944 deportation into a celebration of the fact that President Putin signed a decree “rehabilitating” the Crimean Tatars on April 21 of this year.

Mumdzhi compared this to Jews being “rehabilitated” by Germans.

Smedlya also claimed that people had been arrested for carrying Ukrainian flags, which is not illegal.

The gathering ended with a screening of the Crimean Tatar-language film Haytarma, which tells the story of the highly decorated Soviet fighter pilot Amet-khan Sultan, who accidentally witnessed the deportation and managed to keep his family in Crimea.

Petersburg police detained two activists and a photojournalist near Park Pobedy metro station on May 8 as pro-Kremlin provocateurs attempted to prevent Democratic Petersburg activists from handing out buttons and leaflets dealing with the end of the Second World War in Europe.

In 2014, Ukraine had rejected the St. George’s Ribbon, used by Russia-backed rebels in eastern Ukraine and Russian officialdom, choosing the remembrance poppy instead.

The buttons the activists handed out were emblazoned with the red poppy and the phrase “1939–1945 Never Again,” in Russian and Ukrainian, while the leaflets, which quoted John McCrae’s famous poem “In Flanders Fields,” described the symbol’s history and meaning.

“We believe the St. George’s Ribbon, which has a distinctly militarist message, should also give way in Russia to the red poppy, the universal symbol commemorating those who perished in the most terrible war.”

Activists said Victory Day should be commemorated on May 8, because Russia was part of Europe, rather than on May 9, in keeping with Soviet tradition. According to them, what Russians have usually called the Great Patriotic War was in fact part of the Second World War and was launched in 1939 by both Germany and the Soviet Union, rather than in 1941, when Germany suddenly attacked its formal nominal ally the Soviet Union.

The pro-Kremlin provocateurs, mostly young people, who were apparently led by two older men, were already waiting outside the metro station, sporting St. George’s Ribbons, when the Democratic Petersburg activists arrived to hand out leaflets. The provocateurs approached them and started an argument, justifying Joseph Stalin and promoting what they saw as the Kremlin’s current interpretation of the war’s history. Some of the provocateurs took photos and videos as the argument proceeded. However, when asked, one of the young provocateurs said he was “just passing by,” denying he had come deliberately with the others to harass the Democratic Petersburg activists.

Within minutes, police had arrived at the scene, led by a colonel, the head of Precinct No. 33, whose beat includes the Park Pobedy station. The colonel argued with the activists before detaining 76-year-old activist Igor “Stepanych” Andreyev and, seconds later, our correspondent, who had attempt to photograph Andreyev’s arrest.

While the two detainees were held in the police room inside the metro station, police detained Anton Kalinyak, an activist who had been wearing a large red poppy on his lapel, allegedly for “using coarse language in public.” According to Democratic Petersburg, one of the provocateurs filed a false complaint with the police against Kalinyak, while the police officers at the scene corroborated his accusations. 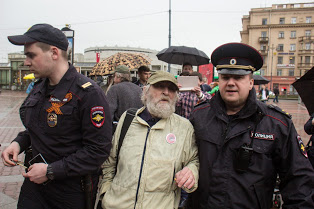 The detainees were taken to Precinct No. 33, where they were charged, correspondingly, with “smoking in a public place” and “using profane language in a public place.” After about two hours in custody, Kalinyak was fined 500 rubles (around $10) on the spot, while the formal written charges against the other two detainees will be sent to their respective local police precincts. They face small fines of between 500 and 1,500 rubles.

All photos by and courtesy of Sergey Chernov