From Saturday’s motorcade: “Employers, corporations and chain stores: we will not allow you to insult people”

Mineworkers are staging an underground occupation in defiance of the authorities in the Lugansk separatist “republic” in eastern Ukraine, who have responded with a campaign of intimidation and arrests.

There were 123 mineworkers underground at the Komsomolskaya pit, in the mining town of Antratsit, for the third day running on Sunday (7 June), the News.ru site reported yesterday. One who had fallen ill was brought to the surface.

The protesters are demanding that their wages for March and April be paid in full. A similar underground protest on 21 April resulted in some money being handed over by Vostok Ugol, a new company set up in the “republic” and charged with closing pits and cutting the labour force.

An earlier protest, in Zorinsk in the Lugansk “republic”, on 4 May, against the closure of the local pit. Photo from Dialog.ua

The Lugansk and Donetsk “people’s republics” were set up by separatist military forces, supported by the Russian government, who clashed with the Ukrainian army in the military conflict of 2014.

The militarised regimes have clamped down on labour and social movement activists, and made independent journalism impossible in the “republics”—meaning that protest has been rare, and news of it does not travel easily. But this week mineworkers and their supporters have taken action nonetheless.

On Sunday the Lugansk “republic” police blockaded the Komsomolskaya mine and stopped food and drink being passed in to the occupiers. Galina Dmitrieva, a local trade union activist, received a a message saying that state security ministry (MGB) officials were on their way to the mine.

After that, mobile phone reception was blocked and the popular Vkontakte social media (similar to Facebook) was blocked. News.ru published text exchanges with local residents who said that the internet could only be accessed with Virtual Private Network (encrypted anti-spying) technology.

Transport in Antratsit was shut down, and on Sunday evening the authorities announced that this was because a medical quarantine was in place.

Aleksandr Vaskovsky, co-chairman of the Independent Union of Mineworkers of Donbass, said in a statement to News.ru:

A quarantine was announced in Antratsit on the evening of 7 June and the whole town closed down. The intention was to deprive the striking miners of subsistence. A curfew was declared and a military force assembled. This force was assembled at Rovenki, and they completely surrounded the Frunze pit, where miners had also tried to strike. […]

In Antratsit on 7 June, from the evening, they started arresting people who had given informational and organisational support to the miners, and organised the strike movement at other pits. They sought out activists at other pits and in other towns. There were arrests in Krasnodon, Rovenki, Krasnyi Luch and Belorechensk. State security ministry officials just came and, without any documents, were taking people with all their computers and mobile phones to an unknown destination.

We were able to find out where some of these arrestees were, in the MGB’s buildings. During the course of the day they had been tortured, with the aim of identifying other activists. At 8:00 another seven people were kidnapped, including two women, one of whom is pregnant.

Vaskovsky told News.ru that workers at Belorechenskaya mine tried to stage an occupation on Monday, but were prevented from going underground by managers.

Since the separatist “republic” was established in 2014, out of 32 pits, 10 have been closed. The mines now employ 44,800 people, less than half of the workforce before the military conflict began.

The Eastern Human Rights Group said on its Facebook page yesterday (8 June) that MGB officials had been in the Dubovsky quarter of Antratsit, where the Komsomolskaya pit is, since Friday, “questioning workers about the instigators of the protest”. Two miners had been arrested and sent for questioning to Antratsit; their whereabouts were unknown. The union president at the mine, Georgii Chernetsov, had been questioned but not detained. The statement continued:

Now a road block has been set up in Dubovsky, and MGB officers have gone to the families of the protesting mineworkers, to put pressure on the protesters through their families. Mobile phone signals have been cut off throughout Antratsit district, although WhatsApp and Viber are working.

This activity by the security forces of the Lugansk “republic” is directed at intimidating workers and suppressing the protest movement in the occupied part of Lugansk district.

Pavel Lisyansky of the Eastern Human Rights Group, based nearby in Lisichansk, in territory controlled by the Ukrainian government, wrote in a Facebook post:

The Russian Federation’s occupying administration in [the Lugansk “republic”] is disturbed by the systematic protests by the labour collectives at the mining enterprises, which are related to the restructuring of the industry, in other words the threat of mass closures.

In the course of these protests new leaders of public opinion have emerged, who have the support of the local population and do not fear the repressive actions by the occupying administration’s special forces.

For the last month, the mood of protest has grown stronger in Perevalsky, Antratsit and Lutuginsk districts in the occupied part of Lugansk region. The leaders of the worker protests have the support and solidarity of other labour collectives in the coal mining enterprises.

It is for this reason that the Russian Federation’s occupation administration has decided to take measures to counter the protests.

On the Ukrainian side of the front line, the Eastern Human Rights Group on Saturday staged a motorcade “to draw attention to the problem of the breaches of labour and social-economic rights of workers during the pandemic and quarantine measures”. 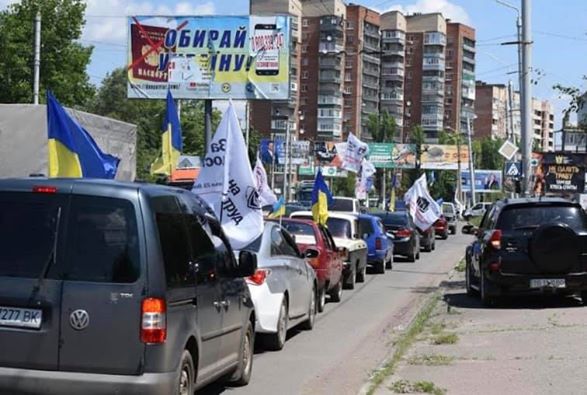 The group said: “We are concerned about the situation in which the state labour inspection does nothing; about the pressure and bribery practiced by criminal groups against trade union leaders, to try to influence workers and employers (there has been a case at Toretsk that we will report on); the unlawful dismissal of workers; and so on.”

Thanks to People and Nature for permission to republish this article here.