“Squandering”: Did the US Secretary of State Grasp the Russian Approach to Budget Spending?
The Kremlin Accused the State Department of Tactlessness and Unprofessionalism, Yet Pompeo’s Remarks Were on the Mark
Yevgeny Karasyuk
Republic
December 13, 2018

Venezuelan Defence Minister Vladimir Padrino gives his thumb up as he sits on the cockpit of a Russian Tupolev Tu-160 strategic long-range heavy supersonic bomber after it landed at Maiquetia International Airport, north of Caracas, on December 10, 2018. Courtesy of Federico Parra/AFP/Getty Images

Russian’s decision to send strategic bombers on a junket to an airport near Caracas elicited a curious reaction from US Secretary of State Mike Pompeo, who publicly expressed his pity for Russian taxpapers, whose money the Kremlin, habitually disregarding the costs, has been spending on its geopolitical moves.

“The Russian and Venezuelan people should see this for what it is: two corrupt governments squandering public funds, and squelching liberty and freedom while their people suffer,” Pompeo wrote.

The Russian Foreign Ministry responded by calling Pompeo’s statement “utterly unprofessional” and even “villainous.” Pompeo’s remarks, which the Kremlin, in turn, dubbed “inappropriate” and “undiplomatic,” were apparently really lacking in nuance: the hardships of Russians, fortunately, cannot yet be compared with the suffering of Venezuelans. But, hand on heart, was Pompeo so wrong when he talked about the losses to the Russian federal budget and lack of oversight?

Russian society has an extremely vague notion about how much the Kremlin’s expansionism has ultimately cost the country. According to calculations made by IHS Jane’s at the outset of Russia’s operations in Syria in autumn 2015, Russia could have been spending as much as $4 million a day. Later, the Yabloko Democratic Party, which is not seated in the Russian parliament, estimated the Kremlin had spent a total of 108–140 billion rubles [between $1.6 and $2.1 billion] on Syria. A more accurate assessment would be difficult to make. Experts doubt that anyone, including the Finance Ministry, keeps tabs on such expenditures. Thus, nobody knows the real cost of Russia’s involvement in the Syrian conflict, argues the Gaidar Institute’s Military Economics Laboratory.

The budget’s fading transparency has been a trend in recent years. In 2016, secret and top-secret allocations accounted for 22% of total federal budget expenditures, a record for the entire post-Soviet period, and much higher than secret allocations in comparable countries, according to RANEPA’s March 2015 report on the Russian economy.

Quite naturally, this state of affairs has not improved the quality of the state’s financial decisions. In terms of effective state spending, Russia ranked nineteenth in a new rating of twenty-five countries, compiled by the Higher School of Economics using data from the World Bank and OECD. Since they are not priorities for the current regime, problems with child mortality and life expectancy were among the reasons Russia ranked so low in the survey: the government spends more on the army than on healthcare—4.3% of GDP versus 3.8% of GDP, respectively. In these circumstances, the chances the Kremlin’s strategic projects in the Middle East and Africa (e.g., the Central African Republic, Burkina Faso, the Democratic Republic of the Congo, and Mozambique) will be decently funded are always much greater than the national healthcare project, which stipulated increased government spending on cancer treatment. The government nixed the plan over summer.

Since it remains largely Soviet in spirit, Russia’s foreign policy has been categorically blind to history’s lessons. The Soviet Union’s exorbitant geopolitical ambitions and support for fringe regimes around the world left the country with a legacy of mostly toxic multi-billion-dollar debts. The process of writing them off has been disguised as a form of international charity or, speaking diplomatically, official development assistance (ODA). According to RANEPA, writing off the debts of developing countries accounted for 35% of all such “international aid” last year or $425 million. It has been the Russian government’s usual way of doing business. Previously, the Russian government wrote off the debts of Nicaragua ($6.3 billion), Iraq ($21.5 billion), North Korea ($10.9 billion), Syria ($9.8 billion), Afghanistan ($11 billion), and Cuba ($29 billion), among other countries. Venezuela risks joining this sad list. Over the past twelve years, Russia has invested a total of $17 billion in the country. 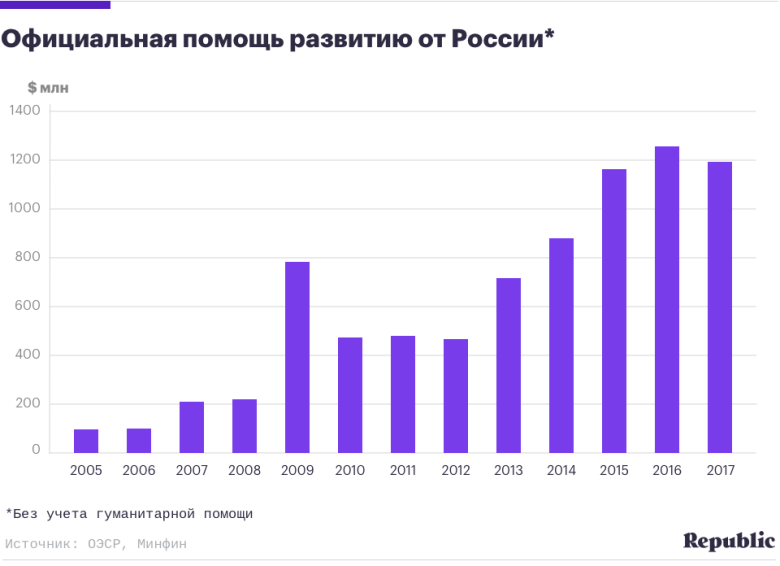 Since it was paid for by the Russian federal budget, which has been running a deficit for the last seven years, Russian officials probably did not see the transatlantic flight of its strategic bombers as too expensive. On the contrary, they saw it as a flashy display of Russia’s military prowess and proof of its influence in the region. However, the government of Nicolás Maduro signed off on the stunt. Subject to growing pressure from creditors and an angry, desperate population, it lives day by day. In all likelihood, it will soon collapse, leaving behind a mountain of unpaid bills and unfulfilled obligations to its allies. If this is the case, can we evaluate the Russian government’s action better than the tactless Mike Pompeo did? Probably not.