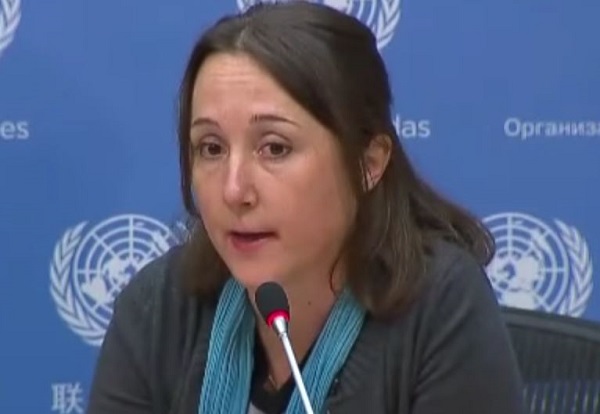 A video is circulating of a woman revealing “the truth” on Syria that is being withheld from us by “the mainstream media”. The woman is introduced as an “independent Canadian journalist”. She is said to be speaking  “at the UN”. The date is December 9, 2016. The video has become viral.

Eva Bartlett, the woman in the video, writes for various conspiracy sites including SOTT.net, The Duran, MintPress and Globalresearch.ca. But more recently she has emerged as a contributor to Russia Today. And though her wordpress blog is called “In Gaza”, and though she has a past in Palestine solidarity work, unlike the people of Gaza, she is a strong supporter of Assad and she uses language to describe Assad’s opponents that is a virtual echo of the language Israeli propagandists use against Gazans.

Bartlett was recently a guest of the Assad regime, attending a regime sponsored PR conference and going on a tour of regime-controlled areas herded no doubt by the ubiquitous minders (the regime only issues visas to trusted journalists and no visitor is allowed to travel without a regime minder). On her return, the regime mission at the UN organised a press conference for her and three members of the pro-regime US “Peace Council” (The organisation has the same relationship to peace as Kentucky Fried Chicken has to chicken). In the press conference they all repeated the claims usually made by the regime’s official media SANA and by Russia Today: all rebels are terrorists; there is no siege; civilians are being held hostage; the regime is a “liberator” etc.

So a conspiracy theorist with a blog who briefly visited Syria as a guest of the regime is declaring that everything you know about Syria is wrong. That you have been misled by everyone in the “MSM” from the New York Times to Der Spiegel, from the Guardian to the Telegraph, from CNN to Channel 4, from ABC to BBC, from CBS to CBC; that human rights organisations like Physicians for Human Rights, Medicins Sans Frontiers, Amnesty International, and Human Rights Watch; that international agencies like the UN and ICRC—they are all part of a vast conspiracy to malign Bashar al Assad. And the truth is only revealed on “alternative” media like the Kremlin’s own Russia Today! (watched by 70 million people a week according to its own claims)

In normal times something like this would provoke derision and dismay—or at least the person would be asked to provide verifiable facts instead of anecdotes (virtually everything she said is verifiably false). But these are not normal times. Supporters of the regime, admirers of Putin, and sectarian propagandists have latched on to this video. Kremlin broadcaster Russia Today has promoted the video heavily. And, in the game of Chinese whispers, the story has morphed into “a UN press conference”.

There is of course a deep racism at play here. Besides great international journalists like Christoph Reuter, Janine di Giovanni, and Martin Chulov, there are also many excellent Syrian reporters on the ground. But we are supposed to dismiss them because the truths that eluded all of them were vouchsafed to a Canadian blogger with a column on Russia Today!

What is happening in Syria is not a mystery. The facts are crystal clear. They are corroborated by multiple independent organisations. People who deny these facts only do so because of a will to disbelieve. It’s willed ignorance in the service of an ideology. This ignorance has been reinforced by Kremlin’s premier disinformation service: Russia Today. The broadcaster has rebranded itself “RT” to conceal its origins and agenda. It has even spawned a neutral-sounding viral video outlet like “In the Now.” Their aim is to sow doubt, feed cynicism, and confound knowledge. They are pressing a narrative—Kremlin’s narrative. And as the major perpetrator of violence in Syria, Kremlin has every intention to muddy the waters. (And no Russia Today is not “just like the BBC”. Have you ever seen a Russian government official questioned on Russia Today the way Tony Blair is questioned on the BBC by Jeremy Paxman; let alone the way Jon Snow on Channel 4 questions David Cameron?)

So next time someone shares a stupid video like this, hit them with facts. If they want to challenge them, then they should bring something more substantial than rambling nonsense from a conspiracy nut. 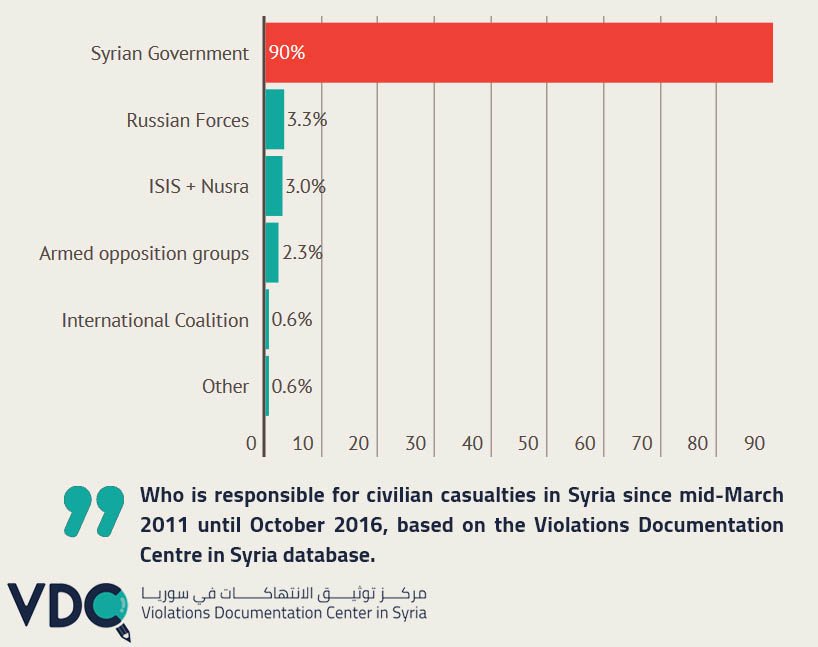 There is an old joke. A wife returns home to find her husband in bed with another woman.

“What are you doing in bed with another woman?” she screams.

“What woman?” the husband replies.

“The woman I just saw in bed with you,” says the wife.

“Who are you going to believe,” the husband replies, “Me or your lying eyes?”

There is no doubt that the Western media has often failed in its coverage. Its reporting on Gaza and the journalism leading up to the Iraq war was abysmal. But western media isn’t devoted to obfuscating truth with the kind of single-minded determination that Russia Today is. It is deeply ironic that many people’s often justified disdain for western journalists has led the into the embrace of a channel that has no commitment to truth at all. And it becomes most pernicious when pro-Kremlin propaganda is dressed up as criticism of “the mainstream media”, “the establishment”, or “Washington”. As I wrote elsewhere:

“There are few things more commonplace than an Oedipal disdain for one’s own government. In this solipsistic worldview, one need not have to understand the dynamics of a foreign crisis; they can be deduced remotely. If you hate your own government then, by virtue of being in its bad books, a Putin or an Assad becomes an ally.

“Conversely, if people elsewhere are rising up against their far more repressive states, their cause is tainted because of a sympathetic word they might have received from your government. And all the images of agony do not add up to a tear of sorrow as long as they are relayed by a hated “mainstream media”. Indeed, victims are reproached for eroding ideological certainties by intruding into our consciousness through their spectacular suffering.”

My heartfelt thanks to Idrees Ahmad for his kind permission to let me reprint his essay here. TRR

One thought on “Idrees Ahmad: Russia Today and the Post-Truth Virus”