Kado Cornet
The Story of Russia, the General, and Other Folks
www.facebook.com
September 8, 2014

The General is the man who attempted to revive Russia.

“I’m the General, I served in Rostov!” is how he later introduced himself.

Actually, I feel terribly uncomfortable because I had called him a “homeless alcoholic” or “drunk tramp” (in an English-language post). These words carry many negative connotations, unfortunately. It was just difficult to succinctly and neutrally define his social position and state of mind or something. But by no means do I want this description to belittle him in the eyes of an outside observer.

Some people have suggested the General’s role in the performance was planned. But that is not the case at all. Before I appeared, he was sleeping peacefully on the windowsill of the Yeliseyevsky store. To be honest, I had turned onto Malaya Sadovaya completely by accident, because I really was blindfolded.

“What the f#ck you waking me up for?” the poor guy said, outraged, in response to my cries.

I decided to fall down after I heard someone say, “Just f#ck her, what is the bitch doing?” and felt that someone, either one of the homeless people or a cop, had grabbed my arm.

Lying on the pavement, I listened to a very serious dialogue between a little boy and his mother about what was happening. I promised myself to remember it, but alas, I wasn’t able to. It’s too bad.

“Is she dead or something?” the General asked, bewildered, and began feeling my pulse. The crowd laughed and took pictures.

I don’t know what the story is with his generalship, but the guy clearly knows first aid. He found the pulse on my arm and neck, removed my blindfold, pulled my eyes open, and checked my pupils (“Ha-ha, you’re not dead! Get up and quit pretending!”). Then he slapped my face (it hurt!) and pulled me up by the arms. He didn’t even spare his booze, pouring it all over my face. My eyes stung for the rest of the day.

“Kiss her!” someone cried out from the crowd.

To my great relief, the General didn’t dare. A moment later, Russia miraculously awoke, finally, from her sleep.

It turned out that a policeman had already called an ambulance. He kept guard over me until it came, not believing me when I said I was fine. The General solicitously questioned me about the incident.

“What did you fall down for? I was really scared! And why are your hands red? I got all dirty while I was resuscitating you! Now I’m all red, too!”

“Why did you fall? Did something happen to you?”

“I was feeling bad, but you saved me.”

“Here, at least put on my shoes. You’re sitting there barefoot.”

He started taking off his shoes and proffering them to me. It wasn’t cold, but I had to get out my shoes and put them on to calm him down.

Two women butted into our conversation.

“Quit bothering her! Leave her alone!”

“He just wants to help her!”

“I will always help you! Do you need money? Take some money!” said the General, pulling a crumpled ten-ruble bill from his pocket. 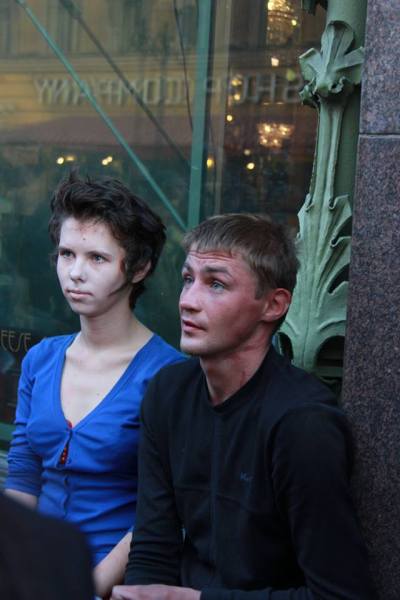 “Aha, you’re getting paid!” said a man in the crowd, catching me red-handed.

I couldn’t have got away with lying: there were too many witnesses. I managed to return the money later, although not right away. Unfortunately, I didn’t have anything with me except a subway token. Getting taken to the police station with cash on you is bad luck.

That’s when the ambulance pulled up.

“What you got here?” the doctor asked.

“This girl here was yelling and lunging at people,” the policeman said.

“Was she screaming anti-government things?”

“Maybe you should take her in, then?”

“No, you’d better examine her.”

“I am so fed up with all this stuff.”

They led me to the ambulance. The male doctor was skeptical, the female doctor, supportive. They politely asked me about my occupation, attitude towards alcohol, education, health, source of income, and, finally, the meaning of my performance.

The female doctor tossed me a couple of interesting ideas.

“Well, I understand you wanted to show suffering Russia. You should have done it so that people would understand and not get worried about you! And warn the policeman ahead of time.”

I apologized to them at length for the inconvenience.

The doctor handed me a document stating I had declined hospitalization.

I didn’t want to upset him any more than I already had.

In conclusion, here is a small vignette as told by Vadim Lurie.

Three young Armenian men in their forties were watching the performance. Two of them soon decided to move on, but one was so fascinated they had to call out to him.

Translated by Bela Shaveyich and edited by the Russian Reader.

A peace activist has staged an emotive protest against the Kremlin’s policies on Ukraine by wandering blindfolded through St. Petersburg with her hands stained blood-red.

The activist, who goes by pseudonym Kado Cornet, was captured in a YouTube video walking barefoot down St. Petersburg’s central Nevsky Prospect, clad in a red skirt, blue shirt and a white headscarf — the colors of the Russian flag.

Cornet also wore on her wrists the orange-and-black ribbons of St. George — a Russian symbol of military valor — and a blindfold over her eyes, while walking with her outstretched hands stained in red.

“This is my Motherland. Blinded, insane, screaming in agony,” the activist said Saturday on her Facebook page. “It does not know where it is going, but it is sure that everyone should be afraid of its hands, which are stained in blood — others’ and its own.”

Passersby stopped in their tracks to watch the young woman as she staggered forward, emitting screams, witnesses said.

“This action made a most powerful impression on me,” Vadim Lurie from St. Petersburg said on his Facebook page. “Kado walked and screamed, and her scream could not be ignored. People received this action much more readily than any [protest] sign.”

The action titled “Russia’s Scream” ended after Cornet collapsed near the renowned Yeliseyevsky food store, lying motionlessly on the pavement, according to social media accounts.

While some passersby expressed concerns that the young woman may have fallen ill, nobody appeared willing to approach her except a homeless man, the protester and witnesses reported.

“When [Russia] falls, it will turn out that nobody except a homeless drunk is able to come to its aid,” Cornet said via Facebook.

A police officer summoned to the scene called an ambulance, Lurye said, though the protester appeared to be in good health, saying later on her Facebook page that she planned to travel around the country and eastern Europe in the coming days.

The artistic action was received positively by a number of Facebook users.

One woman praised the “fragile young woman, who is stronger than a million healthy men who are quietly watching from the side or yapping support for the authorities.”

The West has repeatedly accused the Kremlin of supplying arms to pro-Russian separatists in eastern Ukraine, leading to a conflict with government forces that has left thousands dead and many more displaced. The Kremlin has denied the charges.

But Cornet in her Facebook message was keen to underline that her protest was not just directed at those in power: “No one who has tried to turn a deaf ear to this scream will be able to wash off the blood,” she wrote.