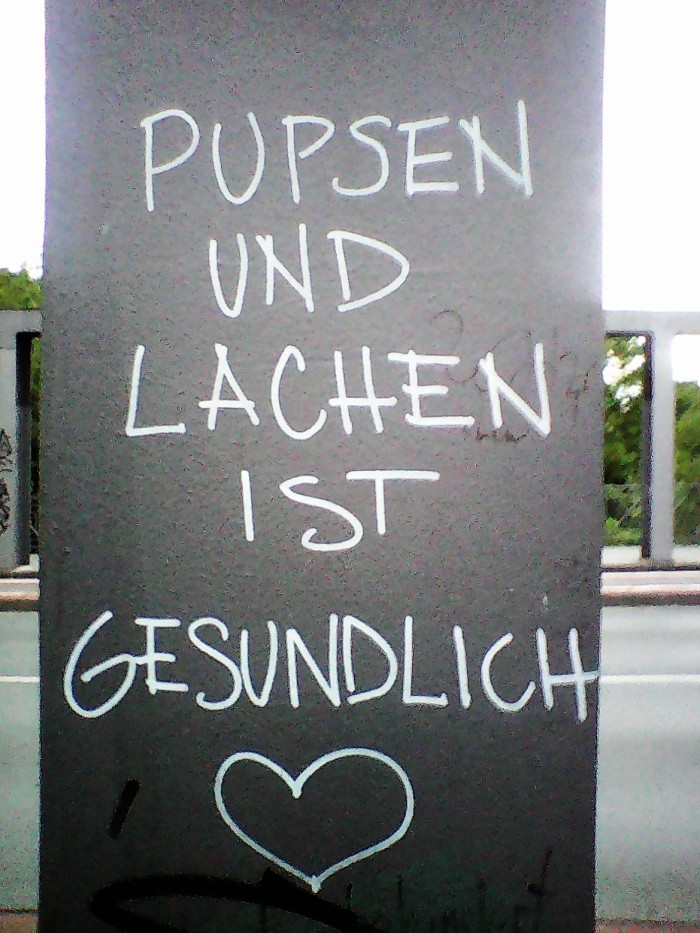 “Farting and laughing are healthy.” A life-affirming message photographed by me on the Langenscheidtbrücke in Berlin-Schöneberg, 16 June 2019.

It’s funny to read one of the most celebrated, successful Russian-to-English translators in the world complaining that an equally celebrated, successful scholar of Russian history wrote a less than glowing profile of a famous writer whose works they have translated and published to great acclaim and universal gratitude, and calling for an online campaign against the famous scholar and their allegedly retrograde views.

It’s funny because there is a whole other world of less celebrated, less acclaimed translators who have other, more mundane problems to deal with, such as getting paid fairly for their work or, sometimes, getting paid at all, and having their work stolen by unscrupulous publishers and other clients.

Just minutes ago, I was informed that the people who shanghaied me yesterday (Saturday) into consulting and commenting on someone else’s (extraordinarily bad) translation of a text and asked me to do this before Monday would not pay me the modest fee of 105 euros I asked for two and half hours of intense work commenting on the very bad translation of the odious text they sent me. They want to pay me 32 euros per the number of characters in the source text, although I made it clear that were this an ordinary translating or proofreading job, my minimum fee would be 40 euros in any case. 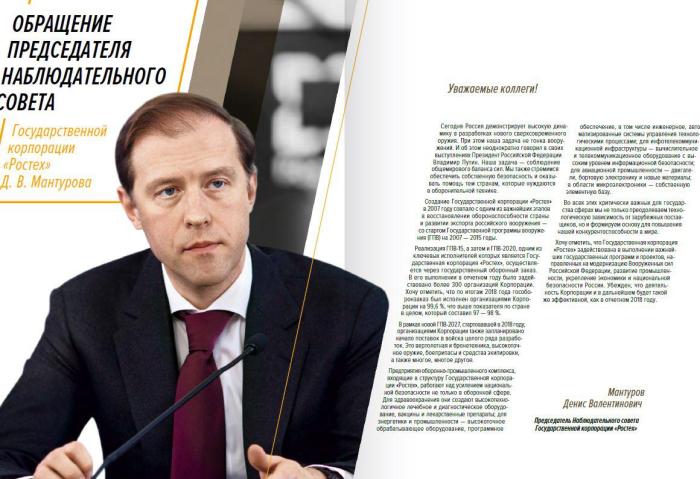 If you read Russian you will understand why I was extremely dispirited to consult on a wretched translation of this source text with no notice and basically no deadline this past weekend. And then the people who asked me to do this thought it should cost them next to nothing.

A few weeks ago, I was perusing the memoirs of a famous anti-Putin dissident, translated into English and published, nearly two years ago, by the world’s largest general-interest paperback publisher.

I was curious to see who translated the book, but no translator is identified by name anywhere in the book. Oddly, however, the publishers had included a plainly false statement in the front matter: “The moral rights of the translators have been asserted.”

You see, I translated a book of memoirs by the same author a few years ago. The book was never published, however, supposedly, because of a nasty conflict with the publisher.

Now, however, this new book has been published (to great acclaim, of course) and, while it is mostly a new book, whoever really wrote it or ghost-wrote it or edited it has inserted chunks of my old, previously unused translation into the new book.

I have not gone through the book with a pencil yet to underline and figure out how many such passages there are, but they are there.

In what sense, then, were my or anyone else’s “moral rights” “asserted”? Neither they nor I was identified in any way as being among the translators. I was not paid by the publisher for my work. I was not sent a copy of the book by the publisher.

The same publisher, by the way, had to be forced by the organizing committee of a prestigious literary prize for books about Russia to send me copies of a book I translated that was awarded the prize last year.

Nor has the world’s most powerful English-language publisher ever contacted me about royalties, although per our contract they are owed to me. I am reasonably sure a decent amount of royalties have piled up by now. Even if they haven’t, they should give me an accounting.

I would say I really have them coming given that both the world’s most powerful English-language publisher and the US publisher that sold them my translation for a song after having pleaded poverty and paid me a miserable fee themselves refused to send me copies of the book. They only did so after pressure was brought to bear on them by influential outsiders.

What I wrote at the beginning of this post was probably wrong. I would be irritated, too, if a celebrated scholar wrote a damning review of a writer whose work I promoted by producing the very best translations of it I possibly could.

But there are translators whose work is ripped off and left unpaid. It comes with the territory, but it shouldn’t. Translators worldwide should organize national and international unions to ensure the fair treatment of translators and their work by publishers and other people who commission translations. When publishers and other clients step way out of line, these unions could intercede forcefully and effectively on behalf of their members.

As it is right now when clients try and throw me under the bus, I either raise a ruckus on my lonesome or I lump it. I usually do both, usually to no effect. Since many outsiders to the craft do not deem translation “real work” anyway, they are only too happy not to pay you for your efforts.

There is power in a union, however, and there really is strength in numbers. {Thomas Campbell, the editor of the Russian Reader and other blogs since 2007, and a freelance translator since 1996}

P.S. Out of curiosity, I just counted (with a little help from WordPress) the number of words I have published on this website since I launched it in 2007: 1,409,036. Apparently, the median length of a book is 64,000 words. In the last twelve years, then, I have translated (mostly) and written the equivalent of twenty-two books and published them on this website.

Discussing the rates professional translators charge, Job Monkey writes, “The average rate per word is 10 to 20 cents, depending on the type of document to be translated, the language combination, the amount of work involved, the subject matter and the deadline.”

For the sake of the argument, let’s forget all other factors and pay me ten imaginary cents per word for my work on the Russian Reader. If someone were to pay me, the bill would be a hefty $140,903.60.

This is not taking into account the work I did on a website that mostly eclipsed the Russian Reader for over five years, Chtodelat News (740 posts between February 18, 2008, and May 4, 2013) and the work I still do, not often enough, on my “relaxation” blog about Finland, Living in FIN, which mostly functions as a platform for my translations of modern Finnish poetry.

Of course, I don’t expect anyone to pay me $140,000 or even a fraction of it for work I made myself do, but even things that are not bought and paid have value. So, it is all the more vital that when translators (all of whom, in my experience, do a lot of pro bono work for good causes) are paid fairly and promptly when they work for money.

Finally, you can support the work I do on this website by looking in the left sidebar, where you will PayPal and Ko-Fi donation buttons. I appreciate all the support I get from my fellow Russian readers. It is what keeps me going.

perc.ituc-csi.org
The trade unions of the flood-stricken Russian Far East ask for your help

29 September 2013: The Association of Regional Trade Union Federations of the Far East has issued an appeal to trade unions around the world 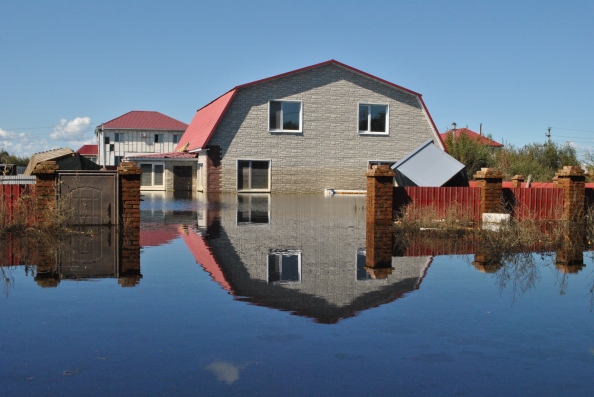 Enormous floods continue in the Far East of Russia for the second month. The Khabarovsk Region, Amur Region and the Jewish Autonomous Region have been hit hardest. Several hundred thousand hectares of cultivated land are submerged; tens of thousands of houses are submerged or damaged. Communications and roads have been damaged as well. Tens of thousands of people have lost their homes and other belongings. Thousands of people are living in temporary shelters, including elderly people and children. The flood still threatens many communities along the lower reaches of the Amur River. Winter will begin here in the coming weeks, and in November we will face the usual temperatures in Siberia for this time of year—between -25 ºC and -40ºC. 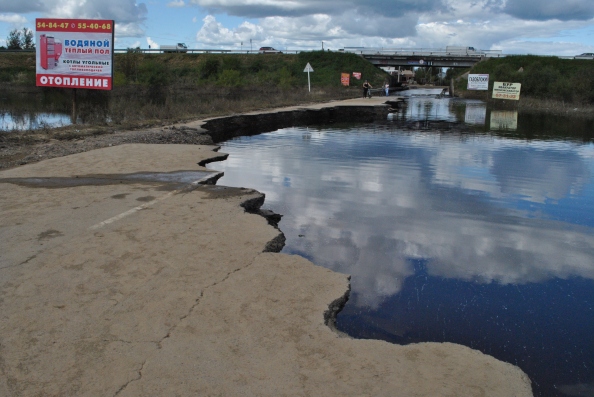 Inhabitants of the flooded areas are doing their best to overcome the disaster: they are building dikes, draining water, and repairing houses. But they need urgent help. They lack the money to buy food, warm clothes and shoes, personal hygiene items, and other staples.

That is why we are asking the international trade union movement to show their solidarity and provide financial assistance to flood victims. 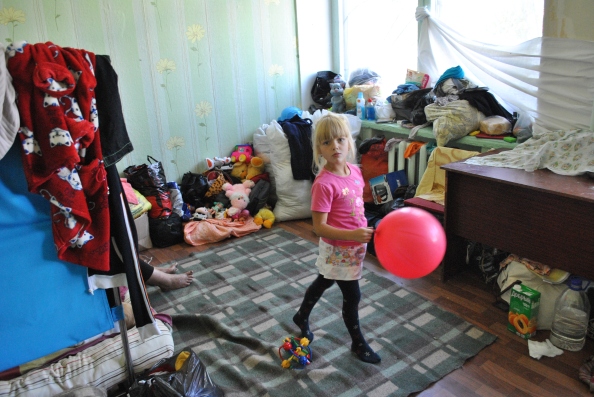 We ask you to send your donations to the bank account of the regional trade union federation of Khabarovsk Region:

[NB. Russian banks do not use IBAN numbers.]

For information in Khabarovsk, you may contact Galina Kononenko by e-mail: gal_kononenko@mail.ru