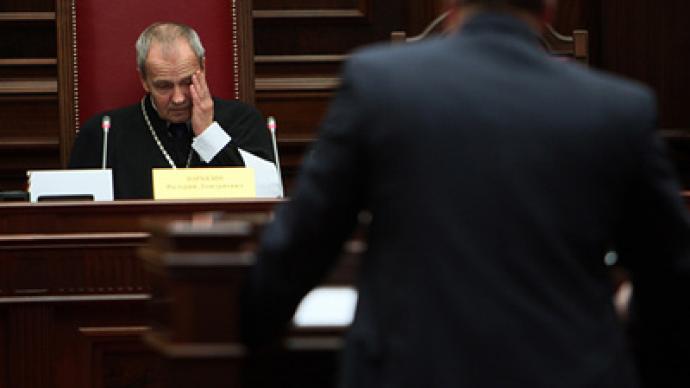 A little over a week ago, western media outlets made a big little fuss over an article by Russian Supreme Court chief justice Valery Zorkin, published on September 26 by Rossiiskaya Gazeta, the official government newspaper. They accused Zorkin of advocating a “return to serfdom.” Elena Holodny, writing in Business Insider, seems to have broken the story in the English-language press and thus set the tone for subsequent coverage:

He advocates for serfdom and says that it was the main “staple” holding Russia together in the 19th century. He justifies his argument by saying that serfdom is beneficial for the serfs.

In the article he writes (translated from the original Russian by Business Insider):

Even with all of its shortcomings, serfdom was exactly the main staple holding the inner unity of the nation. It was no accident that the peasants, according to historians, told their former masters after the reforms: ‘We were yours, and you — ours.’

The roughly translated term “staple” (in Russian “скрепа”) is significant. It’s an older word that has become popular in recent years after Putin used it in a news conference in 2012.

Prior to the conference, that word was basically never used in speech.

In the news conference, Putin said there was a “lack of a spiritual staples” among Russians — meaning there was no spiritual unity. And he subsequently indicated that Russia needed a “spiritual cleanse.”

“Putin essentially used the term ‘скрепа’ to mean the ‘spiritual staples that unite the Russian society.’ He was saying that we need a spiritual unity amongst the whole Russian society,” a Moscovite [sic] told Business Insider.

Following Putin’s news conference, Russian politicians and citizens have started using the word all over the place.

And Zorkin is following suit by using the Putin terminology to indicate that serfdom is the “spiritual staple that unites the [Russian] society.”

In the current climate of cheap hysteria and mental laziness, it is easier to make headlines, literally, saying a top Russian official wants his country to return to serfdom than to read his long, mostly dry-as-dust, pseudo-scholarly article and figure out what he was really trying to say. The payoff, in fact, comes in the final three paragraphs of Zorkin’s article, in which there is no mention, much less “praise,” of serfdom (the emphasis, below, is mine):

Opinion polls and many conflicts in our courts show that the broad masses of our people only suffer as a given the style and type of social, economic, political, and cultural life that the era after the revolution of 1991 brought to Russia. But internally they do not regard them as just and proper.

Moreover, polls show that the greatest degree of aversion pertains to legislative innovations that attack the moral and ethical sphere of social life. [This aversion] is registered primarily among religious people, regardless of denominational affiliation. It is especially pronounced among the older and middle generations. In contrast to the results of opinion polls taken a decade ago, however, it has also begun to manifest itself quite clearly among completely atheistic young people. The new legislative “tolerance” in family, gender, behavioral, and educational relations has been met with growing and increasingly widespread protest.

In connection with the above considerations and historical analogies, I want to reiterate a thesis that I have repeatedly voiced before. Any attempt to overcome “in a single leap” the gap between the law (and law enforcement) and mass perceptions of welfare and justice are fraught with social stress, shock, the growth of all kinds of alienation within society, and between society and the authorities, and, finally, social chaos. Which, as a rule, has to be extinguished by means of counter-reforms and repression.

Zorkin’s article is thus an apology not for serfdom as such. After all, before it was abolished, serfdom really had been the glue that held the Russian political economy together, just as slavery had been in the southern American states, and Zorkin goes to great lengths in his article to show that the nineteenth-century Russian elites, even the nominal conservatives among them, mostly agreed that serfdom was an evil that had to be “extinguished”—eventually and ever so gradually. The article is, rather, a defense of the current reactionary regime, which has increasingly used a combination of funhouse mirrors (“pollocracy,” the relentless manufacture and promotion of moral panics, wildly manipulative and frantically suspicious media coverage of political and social conflicts abroad, “weaponized absurdity”), outright crackdowns on prominent political dissidents, and targeted ultraviolence to persuade itself, the various Russian publics (whether liberal, leftist, conservative or indifferent), and western reporters, policymakers, and pundits that it is acting on behest of a “conservative” popular base dwelling in the heretofore unknown “Russian heartlands.” And even (by way of giving the talking classes more nonexistent fat to chew) that this newfound “traditionalism” has considerable appeal well beyond those heartlands, in the allegedly morally fatigued countries of the perpetually collapsing liberal West.

As a friend of mine wrote to me when we were discussing Zorkin’s article, “It is no longer enough to gang up on gays. We must also make women wear long skirts and headscarves. And forbid them from getting a higher education.” This new overwhelming necessity to de-modernize Russia, however, is not grounded in an actual conservative groundswell or the perennial aversion of the “broad Russian masses” to reform and (God forbid) revolution. Rather, it is meant to jam up brain cells so they cannot ponder (much less act against) sleights of hand like this:

Sanctioned [Russian oligarch] villa owners could be reimbursed with Russian pension savings: The government said in mid-September it was setting up a fund to support sanctioned companies, which would receive a cut of the 309 billion rubles ($7.8 billion) gleaned from redirecting part of the public’s pension savings to the budget this year, the RBC news agency said at the time.

Zorkin has not been the only top Russian official contemplating the lessons of Russian history in the past couple of weeks:

German Gref, head of Russia’s biggest lender Sberbank, on Friday castigated systemic inefficiencies in the Russian government that, he said, waste trillions of rubles and threaten to drag Russian society back into Soviet times.

“We have inconceivable social costs in the area of public administration,” Gref said in a speech to investors and top officials gathered at the VTB Russia Calling investment forum.

These costs increase government spending and render well-intended initiatives ineffectual, threatening Russia with a repeat of past mistakes, he said.

“[Soviet leaders] didn’t respect the laws of economic development. Even more, they didn’t know them, and in the end this caught up with them. It is very important for us to learn from our own history,” Gref said.

Actually, Gref’s speech was much more revolutionary (whatever you think of his neoliberal biases) than this mild account would suggest. If you listen to the whole thing (below, in Russian), you will realize it was a direct attack on the myth of Putin’s extreme competence as a manager of economic policy and the omniscient wizard behind Russian’s alleged newfound prosperity:

In this light, Zorkin’s article should not be seen as a literal call for a return to serfdom, but yet another warning (dolled up, as is often the case with pseudo-scholarship like his, as a “sober” reading of Russian history) that at least one important part of the ruling class is supremely ready and willing to deepen and expand the Duginist quasi-Talibanesque media spectacle of the past year, in which basically anyone at all (except the ruling class itself, of course) is blamed for Russia’s misfortunes or accused of plotting against it—the “Kiev junta,” “foreign agents” (i.e., local NGOs defending basic rights), NATO, Obama, singer Andrei Makarevich, “Ukrainian fascists,” western rock bands, Greenpeace activists, the EU, American students studying Russian at Petersburg universities, “extremist” journalists, you name it. The only solution offered for repelling these “assaults” is to intellectually and culturally medievalize the country that once, not so long ago, gave the world its first artificial satellite and sent the first man into space. But the real point of all this flailing is to prevent anyone from asking too forcefully why this incredibly wealthy country’s vast human and natural resources are siphoned away on frivolous mega projects like the Sochi Olympics and making a few members of a lakeside dacha cooperative fantastically wealthy.

In any case, serfdom’s alleged new best friend, like so many latter-day enemies of “innovative” gender relations and education for women, was singing a very different tune (almost the opposite one, in fact) only eight years ago. They do have ways of making a guy talk. And polling the life out of people whose heads they are otherwise stuffing with nonsense and who cannot be trusted to vote the “right” way.