Because of the severe if not crippling margarine deficit in this district of the ex-capital of All the Russias, I have been reduced to buttering my toast with ricotta. 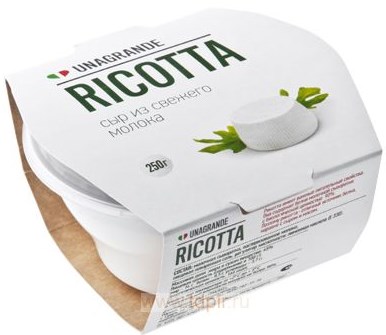 Pictured, above, is Unagrande Ricotta, my preferred brand, and the brand all the shops in my neighborhood (half of which are Dixie chain supermarkets) seem to have in stock all the time, suddenly.

Despite the Italian-sounding name, however, and Unagrande’s cutesy-pie Italian-tricolor-as-heart logo, it is manufactured not in Italy, which as an EU member, is subject to Putin’s anti-sanctions against the import of most EU produce to Russia.

What has bitten Russian taste buds especially hard has been the sudden absence of decent cheese, which, before the Putin regime decided to rule the world, had been imported to Russia in large quantities, mostly because the majority of domestic Russian cheeses were neither particularly tasty nor plentiful.

Russians traveling abroad now consider it their patriotic duty to stock up on cheese before heading back to the Motherland, where they will consume it with relish themselves or, since Russians like to share, to divvy up among their friends or have a cheese-tasting party. Likewise, Europeans welcoming friends from the Motherland have been known to serve their country’s finest cheeses before and after dinner.

There are even black market Estonian and Finnish cheese outlets, practically operating in broad daylight, in the farther flung corners of the city. A friend of mine has bought such zapreshchonka (banned goods) in these establishments, usually housed in inconspicuous kiosks, on several occasions.

No, my daily ricotta is produced not in Italy, as the name and the packaging insistently suggest, but at 130 Lenin Street in the town of Sevsk, in the far western Russian region of Bryansk.

Despite its exalted status as the new ricotta capital of Russia, Sevsk is a modest town whose population, according to the 2010 census, was 7,282.

To their credit, however, the Sevskians produce their delectable Unagrande Ricotta from whey, pasteurized cream, and salt. That’s it.

Unagranda Ricotta contains zero percent of the detestable and environmentally ruinous palm oil that other Russian cheese manufacturers have pumped into their cheeses, also bearing European-sounding names, to make up for real milk and cream, which have been in short supply and are more expensive, of course.

So I doff my cap to the honest dairy workers of Sevsk, who have managed to produce a delightful 250-gram tublet of perfectly edible and utterly non-counterfeited ricotta, which sells for 144 rubles (a bit over two euros) at my local Dixie.

I would still like to know, however, what has happened to all the margarine. TRR