Business Russian Style, or, What is Miratorg, and What Do You Eat with It?
Dmitry Zhuravsky
Readovka
April 30, 2019

How Did a Company Importing Meat from Brazil End Up Getting Most of Russia’s Agricultural Subsidies?
Miratorg’s own website identifies it as the largest agribusiness investor in Russia. The company is owned the Linnik twins, Viktor and Alexander. Viktor serves as the company’s president. It was Viktor Linnik who, last week, proposed tightening controls on the luggage of people entering Russia and increasing penalties for the illegal import of meat-based products. Today, he encouraged Russians to stop thinking about Parmesan cheese and start thinking more about the country’s growth. To rub it in, he dubbed everyone disgruntled with such proposals “blowhards.”

We should point out right off the bat that the fact Prime Minister Dmitry Medvedev’s wife’s maiden name is Linnik is only a funny coincidence, one which the Linnik twins have never tired of mentioning when they are interviewed by journalists.

The facts back this up. Blood relatives of the Russian state’s second most important person could not have established a giant agribusiness company that keeps all its accounts and founding capital outside Russia.

Nevertheless, Miratorg is on the Russian federal list of so-called backbone companies and, since 2015, due to Russia’s self-imposed ban on meat and produce imports, it has been dubbed a strategic company. These regalia allow the Cypriot-based company to obtain loans from Vnesheconombank at discounted rates, which means it borrows part of its operating capital by drawing on the future pensions of Russians. (We published a detailed analysis of this scheme in a previous article.) It also means Miratorg can apply to the government for subsidies to pay back these selfsame loans.

A Success Story
Considering Viktor Linnik’s current circumstances, Miratorg’s origins appear laughable. The company was initially established to import meat from Holland and Brazil to Russia. To make the job easier, two years after the company was founded, in 1997, Miratorg opened a subsidiary in the Kaliningrad Sea Fishing Port, through which it imported meat to mainland Russia. Miratorg did business this way for nearly ten years. In 2005, it purchased a stake in two BelgoFrance-owned pig farms in Belgorod Region. The import company was transformed into a full-fledged agribusiness.

Miratorg went on to co-found a farm in Kaliningrad Region. A little later, it moved into Bryansk Region, which has become the company’s second home.

It was also in 2005 Miratorg was chosen to be involved in the National Priority Projects, a program for growing “human capital,” announced by Vladimir Putin on September 5, 2005. Until Dmitry Medvedev was elected president, the program, which included promoting the agricultural sector as one of its priorities, was overseen by the current Russian prime minister. Since 2008, when Medvedev was inaugurated president, the agricultural growth program has had its own line item in the federal budget.

Current Realities
Miratorg is currently Russia’s largest meat producer. According to Kontr.Focus.ru, an online service for assisting in doing due diligence on potential clients and business partners, Miratorg, Ltd., has founded thirty-six subsidiaries in eight regions of Russia. In 2017, the company produced 415,000 tons of pork, 114,000 tons of poultry, and 82,000 tons of beef.

Russia’s regions regard Miratorg as a valuable investor whom nearly any governor would be glad to welcome into his neighborhood. According to Miratorg’s website, the company has made a total of 200 billion rubles in investments. The advent of an agricultural market player of this caliber in a region means a guaranteed inflow of money from the federal budget in the form of subsidies from the government’s agricultural sector growth program and  Miratorg’s own investments.

On paper, Miratorg is a real find for regions heavily dependent on federal government subsidies. Aside from the federal agricultural subsidies it brings with it, Miratorg contributes to regional budgets through the land it leases. Its farms provide jobs while they are being builty and after they are brought on line. In addition, it pays taxes in the regions. The company is not a burden but a blessing, or so it would seem. 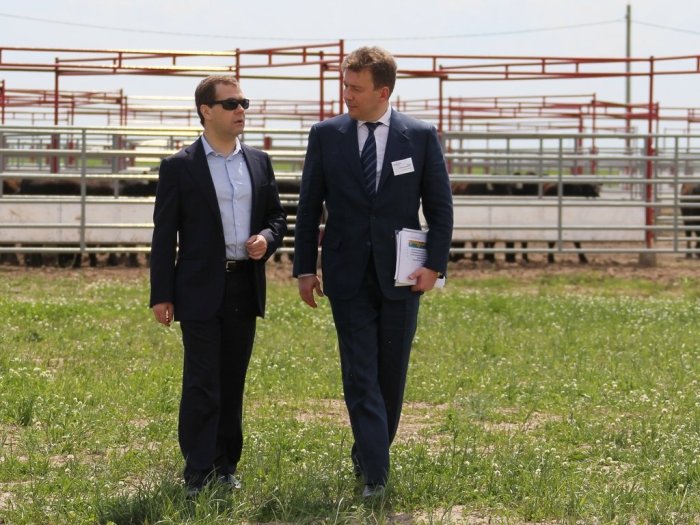 Taking advantage of its status, Miratorg moves confidently around Russia. In the regions, it has become accustomed to acting suddenly and brazenly. The company often receives land under indefinite gratuitous bailments by order of the federal government, whose decrees are personally signed by Prime Minister Medvedev.

Miratorg usually acts in full compliance with the law, although the effects of how it does business trip up regional governments. After three years, the land it leases free of charge is transferred from regional ownership to Miratorg’s ownership.

Last summer, the Bryansk Commercial Court adjudicated a conflict between the Bryansk Meat Company (Miratorg’s local subsidiary) and the Bryansk Regional Government. Miratorg tried to prove that members of a district council had violated the law by refusing to sell them land they had been leasing. According to law, a company that has leased agricultural land for three years has the right to purchase it and continuing farming it. Only two conditions must be met for the deal to go through: the relevant regulatory authorities must have no objections, and the land must be used for its original purpose.

The Bryansk Meat Company had complied with these terms, but local councilors had not signed off on the deal. Originally, they had agree to lease the land to the investor. Later, Miratorg’s subsidiary decided to trick the council and buy the land. Consequently, the local council was not paid the rent promised to it and did not profit from Miratorg’s presence in the district.

Instead of a lease, the local council was offered a one-time payment, which is transferred to the council’s accounts when the investor buys the land. Bryansk Meat Company’s farm occupies thirteen parcels of land totaling 7,398,700 square meters. Under the terms of the sale of the parcels to Miratorg, the average assessed value of one square meter of land is a mere 1.6 rubles. It is a great deal for Miratorg, but not for Bryansk Region.

We found reports of similar law suits ongoing between Miratorg and local governments in other regions of Russia.

Nastiness Is a Warm Gun
Since 2009, Miratorg has also confidently been colonizing Kursk Region. Its investments there began with the Pristen District, but currently the company operates in thirteen districts in the region. Its facilities in Kursk Region include the Pristen Pig Farm, Blagodatnoye Agricultural Enterprise, Renaissance Farm, Fatezh Lamb, and Miratorg Kursk, Ltd. According to Miratorg’s figures, it invested 17 billion rubles on its agribusiness facilities in Kursk Region between 2009 and 2017. In the Pristen District, it built two pig-breeding facilities with three sites each, while in the Oboyan District it built two pedigree breeding units.

Currently, Miratorg is building what will be Europe’s largest refrigerated slaughterhouse with a capacity to process 4.5 million head of hogs or 400,000 tons of meat in slaughter weight. Miratorg has also been building seven pig farms in two other districts in the region. 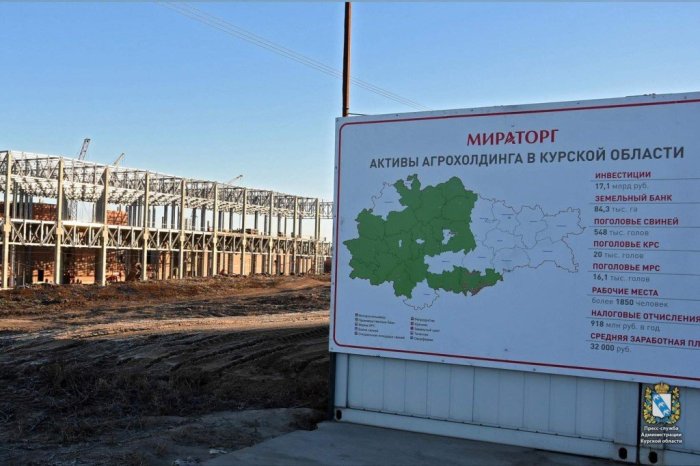 Why has Miratorg invested so much in Kursk Region? For the same reason it has invested heavily in Smolensk, Bryansk, Kaluga, Kaliningrad, and other regions in Russia. The Russian federal budget supports domestic industrial agricultural enterprises with subsidies. Some of the federal government’s assistance is earmarked for the largest players in agribusiness, the strategic, “backbone” companies we mentioned earlier. Some of the assistance is filtered through regional government budgets, where it is meant to boost small companies and support local producers. When Miratorg sets up a subsidiary in a region, it automatically grabs the lion’s share of federal subsidies for itself.

In Russia, there are no limits on the subsidies a particular agricultural holding company can receive. By using the subsidiaries it has established in the regions, a national agribusiness company can qualify for regional subsidies. For example, in 2016, the Bryansk Meat Company was awarded 98% of all subsidies earmarked in the federal budget for promoting agriculture in Bryansk Region.

At the same time, Miratorg has been officially designated as a strategic, “backbone” enterprise. Accordingly, the company and its subsidiaries also receive subsidies for pursuing particular projects. Since 2014, Vnesheconombank has lent Miratorg $871.5 million to expand meat production. Thanks to sleights of hand such as this on, in 2016, Bryansk Meat Company left not only farms in Bryansk high and dry in terms of financing but also farmers nationwide by hogging 90% of all subsidies earmarked for agriculture. The total amount of subsidized loans was 33.6 billion rubles, and this financing was obtained by a single Miratorg subsidiary for a single year.

The company has been feeding off this program since it was founded in 2005. Miratorg has received hundred of billions of rubles in subsidies over this period.

The more subsidiaries it gets, the more lines of credit Miratorg can receive. The story  of its rise to the top bears a strong resemblance to the way Yevgeny Prigozhin built his school cafeteria catering monopoly in Moscow. There is one signal difference, however: whereas Concord Catering’s contract implies that Prigozhin’s food production facility does the work for which it was contracted and pays back its debts out of the profit generated by the facility, some of Miratorg’s loan agreements contain an interesting loophole. It can fulfill its obligations to Vnesheconombank one of two ways, either the way Concord Catering does it, by paying back its debts out of its profits, or by selling off its founding shares in its subsidiaries to pay off its loans. Meaning, hypothetically, Miratorg can rid itself of some of its subsidiaries.

Where Do Miratorg’s Profits Go?
Considering the billions in government subsidies it receives annually, Miratorg and its owners do not even have to run a good business to live high on the hog. According to open sources, Miratorg’s profits shrunk fivefold in 2016, amounting to a mere five billion rubles, despite the fact the company received several tens of billions of rubles in subsidies from the Russian federal government.

Nevertheless, Miratorg is the main supplier of meat for huge fast food chains such as McDonalds and Burger King. It has also launched its own cafes and supermarket chain. Miratorg’s profits, which are incomparable to the subsidies paid to the company, end up not in Russian bank accounts, but in offshore accounts in Cyprus.

Miratorg’s operations do not resemble an attempt to promote Russian agriculture, but rather a scheme for spiriting federal money out of the country. Given Miratorg is the industry leader in terms of land assets and government support, it should also have come to monopolize supermarket shelves. Its status as a strategic enterprise and the subsidies it receives simply oblige it to aspire to this end. The government’s plan was to have Miratorg replace all the imported meat banned from supermarkets with domestically produced meat.

Instead, Miratorg annually receives several hundreds of billions in subsidies allocated by the government to support the country’s agriculture. Miratorg spends the money to purchase land, which it uses, along with shares from its regional subsidiaries, as collateral to obtain more loans.

Ultimately, instead of building a successful business and resurrecting Russian domestic agriculture according to the government’s plan, Miratorg merely filches money from the federal budget. As long as it keeps feeding the “Cypriot butchers,” real hardworking Russian farmers will have to get by without substantial assistance. Eventually, the whirligig of subsidies could lead to the complete collapse of Russian agriculture as such.

Thanks to Anna Klimenko for the heads-up. Translated by the Russian Reader