“They Proceeded to Pull Down My Trousers, Threatening to Shock Me in the Groin”: Anarchist Svyatoslav Rechkalov Relateds How He Was Tortured and Beaten after Police Detained Him in Moscow
Mediazona
March 15, 2015

Anarchist Svyatoslav Rechkalov, apprehended by police on March 14, has told Yevgeny Yenikeyev and Kogershyn Sagiyeva, members of the Moscow Public Monitoring Commission (PMC), how he was tortured with electric shocks and beaten in police custody. To corroborate his statement, he showed the members of the PMC the traces left by the electric shocker: “[D]ifferently sized red dots on the outside of the hips and the knee.” The injuries were recorded by a paramedic at the Temporary Detention Center where Rechkalov is currently incarcerated. He and several other people were detained as part of the investigation of an attack in January on a United Russia party office in the Moscow neighborhood of Khovrino. Persons unknown shattered a window in the office and tossed a smoke grendade [sic: Grani.ru has reported it was a lighted flare] into the premises. Yelena Gorban and Alexei Kobaidze were detained on charges of vandalism, but were later released on their own recognizance. Below, we have published a transcript of Rechkalov’s handwritten statement. Yevgeny Yenikeyev posted a scan of the statement on his blog.

At seven a.m. on March 14, 2018, police officers came to the flat where I live, at [address deleted], to search it. They knocked down the door, and then the search took place. Around twelve noon, I was taken from the building. I was blindfold with black adhesive tape, my hands were tied, and I was put in a minivan. I was driven around the city for several hours, and then placed in a GAZelle van containing police officers. My flatmates E. Sergeyeva and Yevgeny Popov were also in the van. Before I was placed in the van, the tape was removed from my eyes and my hands were untied.

After some time, I was put back in the minivan. A plastic bag was put over my head and I was handcuffed. In the minivan, two men whom I did not know asked me questions about the anarchist movement Popular Self-Defense (Narodnaya samooborona) and different people. How had I ended up in the movement? What did I have to do with it? What protests had I been involved in? What were the same people they had asked me up to? When I would refuse to answer or give an unsatisfactory reply, I was shocked with electrical current on the outside of my hips and the vicinity my knee (above and below the knee). They mostly shocked me in the left leg. At the moment, traces of the shocks are visible on my legs in the form of red dots.

From time to time, my interlocutors would get out of the minivan, and then two or three men would punch me in the body and legs, and shock my legs. The punches were mainly aimed at my lower back and were not hard. The electric shocks were their main method of working me over. The duration and intensity of the shocks increased. The men demanded I answer all their questions.

When they proceeded to pull down my trousers, threatening to shock me in the groin, I made up mind to incriminate myself in the vein in which the men were demanding I do. I confessed I was admin of Popular Self-Defense’s VK page, and a leader and organizer of the movement. If I refused to testify [later] to the investigator or went public with the fact I had been tortured and beaten, the men threatened to take me on a second trip with the electric shocker, a longer and more harrowing trip, and they promised to charge me in The Network case [meaning the so-called terrorist community The Network. The FSB has detained several anarchists in Penza and Petersburg in the case, and many of them have claimed they were tortured—Mediazona] and make the conditions of my stay in the Temporary Detention Center and Remand Prison difficult. My sense is I spent around an hour in the minivan. 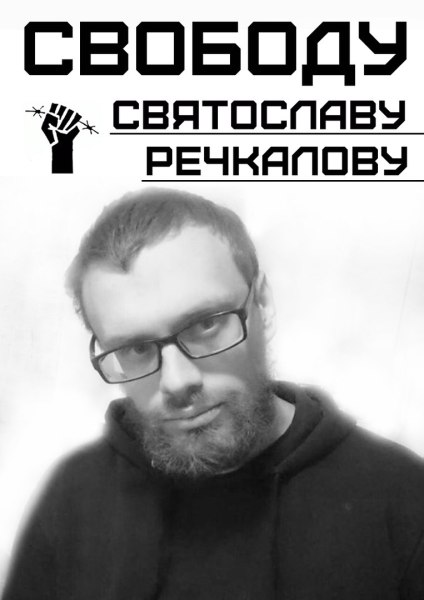 I was then taken to a police precinct near the Tulskaya subway station, but maybe it was the Moscow police’s investigative department; I don’t know for sure. Around four p.m. I was taken into a room where Center “E” (Extremism Prevention Center) officers were seated. There, in the presence of Investigator Kostin, I repeated what the men in the minivan had demanded I say. One of the Center “E” officers in the room had been at my place during the search in the morning.

I was then taken off to be interrogated as a witness in the investigation of the case of vandalism against the United Russia party office. Aside from the investigator, whose surname I cannot remember, there were men in plain clothes in the room, including Center “E” officers. I testified in the vein in which I had been asked to testify, identifying myself as an admin of Popular Self-Defense’s VK page and an organizer of the movement. The men demanded I incriminate other people, which I refused to do. In the presence of the investigator, the men in plain clothes in the room threatened to take me on another trip in the minivan, after which I refused to give any more testimony. As a result of threats and coercion, I signed a transcript of my earlier testimony to the effect that I was a leader, organizer, and admin of Popular Self-Defense. That testimony was obtained through torture and threats of further torture.

My interrogation as a witness ended at approximately six p.m., after which I was kept at the police precinct until around nine-thirty p.m. Before this, I had demanded to call a lawyer of my choice, but I was not allowed to do this and was provided with a state-appointed lawyer. During my interrogation as a suspect, I repeated the testimony I had given earlier as a witness. I testifed because I was afraid they would torture me again and because I had given the same testimony as a witness. The interrogation ended at eleven p.m.

I spent the next eight hours in the police precinct until I was taken to the Temporary Detention Center by armed guards at around seven in the morning on March 15.

I am afraid the torture and pressure will continue, that my testimony, obtained through torture, will be entered into the case file, and that the threats to implicate me in The Network case will be carried out.

Thanks to Comrade TR for the heads-up. Translated by the Russian Reader

If you haven’t heard about the Penza-Petersburg “terrorism” case and the related crackdown against Russian grassroots and political activists on the eve of the March 18 Russian presidential election, you need to read the following articles and spread the word.

Anarchist Svyatoslav Rechkalov, detained yesterday as part of an investigation of the attack on the United Russia party campaign headquarters in the Moscow district of Khovrino, has been remanded in custody to the Temporary Detention Center, as reported in the early hours of Thursday by OVD Info, who cited Yevgenia, a friend of Rechkalov’s who was detained at Rechkalov’s flat along with him and another person whose name has not been ascertained. It cannot be ruled out the person in question was an anarchist named Andrei, who as of Wednesday evening had also not been released from police custody.

Rechkalov informed his comrades that,when he was in the Moscow police’s investigation department, police officers had tortured him, demanding he confess his involvement in the attack. They put a plastic bag over Rechkalov’s head and administered electrical shocks to his legs.

It has not been ascertained whether Rechkalov confessed or not. Yevgenia maintains he had nothing to do with the attack on the United Russia headquarters.

Yevgenia and the unidentifed third detainee were released last night, but on Thursday they were summoned to the investigative department for questioning as witnesses.

On Thursday morning, lawyer Mikhail Biryukov reported he was going to the investigative department to obtain permission to see Rechkalov.

Yesterday, we reported that Left Bloc activist Vladimir Zhuravlov and an anarchist named Artyom had been questioned as witnesses in the case. Both men said they had no information about the attack.

In addition, security services officers searched the Left Bloc’s headquarters, confiscating all the equipment they found there and cracking open a safe. The three activists present the headquarters—Vadim Timergalin, Grigory Sineglazov, and Denis Avdeyev—were detained and taken to a police precinct. They were later released without charge.

The Left Bloc’s VK page reports officers at the precinct had “conversations” with the activists during which they repeatedly threatened them, demanding they testify against their Left Bloc comrades.

It was also noted that, during the search, a lawyer [sic] received messages from unknown accounts, messages supposedly written by the activists. They informed him they did not need his help.

Left Bloc linked the search of their headquarters and the interrogation of Zhuravlov with the ongoing campaign to boycott the upcoming Russian predisdental election. In particular, they mentioned a protest opposite the Nikulin Circus on Tsvetnoy Boulevard during which a banner emblazoned with the slogan “March 18: Tricks and Clowns” had been unfurled.

We assume that, as the presidential election approaches, the police and FSB want to intimidate everyone who has been calling for a boycott. They are justifiably afraid a low voter turnout is a danger to the political farce wrongly called an “election.” All activists involved in the election boycott are now in danger. We concede the outrageous instances of coercion could continue. However, no crackdown can force us to abandon the fight. Boycott the election! We cannot be intimidated! We cannot be forbidden! 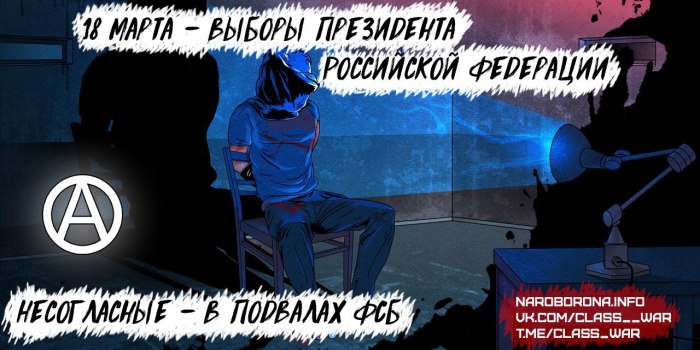 “March 18: Russian presidential election. Dissenters in the cellars of the FSB.” Image from the VK page Popular Self-Defense

The attack on United Russia’s campaign headquarters in Khvorino occurred late on the evening of January 30. Three people, including a young woman, took part in the attack. The attackers broke a window in the office and tossed a lighted flare inside. One of attackers filmed the attack on video.

Antifascists Yelena Gorban and Alexei Kobaidze were detained in the case on February 13, charged with vandalism under Article 214 Part 1 of the Russian Federal Criminal Code. The crime entails a maximum punishment of three months in jail and, consequently, does not stipulate that people accused of the crime be remanded in police custody until a verdict has been reached, according to Article 108 Part 1 of the Russian Federal Criminal Procedural Code, which covers incarceration. Nevertheless, both Gorban and Kobaidze were sent to the Temporary Detention Center, as Rechkalov has been now.

However, forty-eight hours after they were apprehended, Gorban and Kobaidze were released on their own recognizance. Gorban had confessed her guilt, while it was reported Kobaidze had refused to testify, invoking his right not to incriminate himself under Article 51 of the Russian Constitution.

Thanks to Comrades AR and ZV for the heads-up. Translated by the Russian Reader