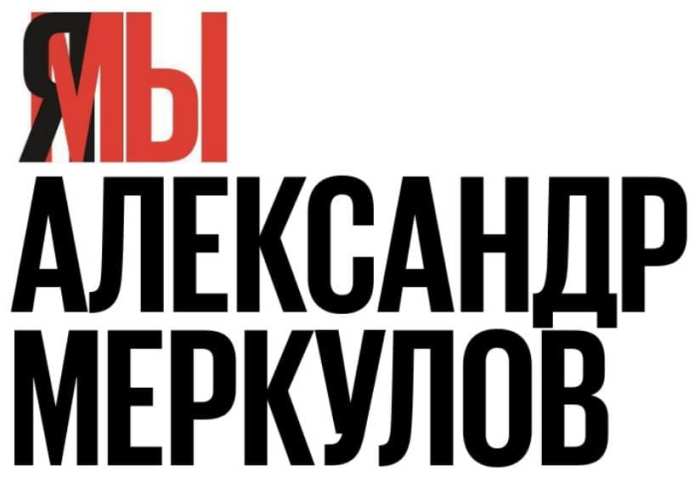 “I am/we are Alexander Merkulov”

An abyss of silence. You shout at the top of your lungs, but there’s no response, only silence. It’s like in a dream when you need to shout, but you have no voice at all. It’s gone. In a dream, however, you can wake up, while in this case…

On the placard, I had tied a bell to a symbolic spool of the white thread that was used to sew the shaky case against Alexander shut. It trembles in the wind, and passersby hear its “ding-ding.” For whom does the bell toll? Don’t walk on by, don’t look away…

Why did I get involved in the case of Alexander Merkulov (aka Aleksandr Peĵiĉ)? We weren’t friends, just acquaintances. Why, even though I hate court hearings, did I attend three court hearings last week?

The bell has a tongue. Many people in prison don’t have a tongue. The Russian Themis does not hear them. Not only has she blindfolded her eyes, but she has also put earplugs in her ears and plugged them tight. Whether you yell or not, you will be sentenced The judicial ear is sensitive only to the sovereign’s oprichniks. Gulag-minded, the courts presume that you are guilty, nor are their verdicts subject to review or appeal.

So it turns out that the only voice prisoners have is their circle of support on the outside. These groups are different for everyone. The famous blogger has hundreds of thousands of subscribers. The arrested journalist enjoys the corporate solidarity of the media: the major newspapers publish editorials about him, while his colleagues devote columns and radio and TV broadcasts to him.

A prominent public figure is supported by ordinary Russians, his fellow activists, and human rights defenders. And doctors, actors, truckers, feminists, LGBT activists, etc., have the support of their own communities. But Merkulov’s case has nothing to do with LGBT issues, so LGBT organizations can’t give it the proper attention and resources.

Sometimes, it is possible to raise a regional case to a national and even international level of publicity, as many people have managed to do in the case of Yulia Tsvetkova by pooling their efforts. While it is no guarantee of victory, it increases the chances.

But most cases in Russian courts are heard in complete silence. People are sentenced, transported to prison, and serve their sentences or die trying, and yet nobody says a word. Of the five cases that were heard in Petersburg City Court on Wednesday morning in the same courtroom as Alexander’s case, only his hearing featured a few members of the public in the gallery. The other defendants faced indifferent silence before hearing the judge say, “The appeal is denied, the defendant will remain in custody.”

Recently, the Perm human rights activist Igor Averkiev wrote an excellent post entitled “The Personal Usefulness of Crowds.” It’s not about people, it’s about animals—about the chances a hypothetical “introverted reindeer named Sergei,” a “social reindeer named Kostya,” or a “young musk ox named Proshka” would have against a pack of predators, a pack of “Lake Taimyr wolves.” I will quote a couple of passages from it.

“I’m a reindeer named Sergei. But I’m a very introverted, nearly autistic reindeer, and I only really feel good when I’m alone. And so, being the only other reindeer for many miles around, I come across a pack of hungry wolves. My chances are almost zero: I run faster, but they are more resilient. Moreover, when I’m alone, it’s easier for the wolves to work together smoothly as a group. Basically, I’m no longer here… Natural selection is why we don’t see ‘nearly autistic introverts’ among reindeer.”

“Any danger forces people (and not only people) to band together in a group, in a crowd. This happens instinctively. The import of this instinct is obvious: it depersonalizes the threat. When I am in a crowd, the danger is not focused on me personally, but rather is distributed over a large number of people, which increases my own chances of survival. But you can not only hide in a crowd, the crowd can also protect you. When it comes to self-defense, the size of the crowd matters.”

Any metaphor has its limits, of course. So, returning to Alexander, I want to talk about more than just him. We know that he is one of Averkiev’s “autistic introverts.” Not only does he lack media fame, but he also lacks a large number of what are called “stable social connections.”

(The topic of how the system cracks down on people with psychiatric or mental peculiarities deserves a separate post).

And this was where I said to myself: Stop, Alexei. There is no retreating. If it weren’t for you and the few colleagues who have got involved in this ‘hopeless case,’ and for Alexander’s mother, Alexander would be a goner.

I think this was what Olga Masina, who is seriously ill and undergoing medical treatment, and yet still works, said to herself. She stubbornly spends the few free hours and energy she has covering Alexander’s case. And then, like ripples on water, other people plug into the campaign. Svetlana Prokopyeva, who was convicted of the same “crime,” wrote an article about Alexander between her trial and her appeal. And Grigory Mikhnov-Vaytenko has got involved, too.

This story is not so much about Alexander, it’s about all of us. This is a test of our personal commitment, of our capacity for overcoming ourselves and our circumstances. Do we do something, however small, or do we just turn away and make excuses?

Of course, even a serious public response does not guarantee a 100% positive outcome. But the lack of support almost guarantees a negative outcome. And, at least, our involvement is felt by Alexander, and it is important for him, he writes about it in his letters.

I will end this post with two actual quotations.

“We’re not going to Merkulov’s court hearings. He’s not as cute as Yegor Zhukov,” writes a gay man.

“I’m not ready to picket yet. The case itself is quite murky.”

Of course, I respect the right to choose.

But let me remind you that Alexander, a pacifist and anti-fascist, is accused of “condoning terrorism” on the internet for three reposts and a four-word post about 17-year-old [Mikhail] Zhlobitsky, who blew himself up in the FSB building in Arkhangelsk.

Does this warrant up to 7 years in prison? Do we need to keep Alexander in jail for three months running as if he were a particularly dangerous criminal? For me, the answer is obvious, and the point is clear in this sense: there were no calls for violence in Alexander posted. On the contrary, when reposting, he wrote that he did not approve of violence.

There is no counting the streets in our country that still bear the names of terrorists, but our valiant security forces could not care less. We LGBT activists send notarized bundles of the threats we receive to the police, but they don’t open criminal investigations because, they say, “the threats are not real.” Assaults, domestic violence, and poisoning are “not grounds for criminal prosecution.”

But Alexander’s actions are a “threat to national security”? The criminal case against him is a joke. The article in the criminal code under which he has been charged [Article 205.2] a mockery of the law. In my opinion, if it is left on the law books, then at most it should be an administrative offense.

Read the Wikipedia article about the bombing in Arkhangelsk: more and more people have been getting prison sentences for its “long echo.”

We’re talking about people’s lives here. We’re talking about Alexander’s life. Will his fate be decided in silence, or will we pass this test of caring? We don’t have horns and hooves like musk oxen and deer, the only things we have are our voices and our conscience.

At 12:30 p.m. on September 10, the appeals hearing on Alexander’s remand in police custody will take place at Petersburg City Court.

The Petersburg City Court upheld the original decision to remand Alexander Merkulov in custody. In the photo, you see the face of this “justice”: Judge Tatyana Matveyeva Tatyana , hiding behind the monitor.

Prosecutor Minina didn’t even stay for the announcement of the court’s decision. Apparently, she already knew it in advance.