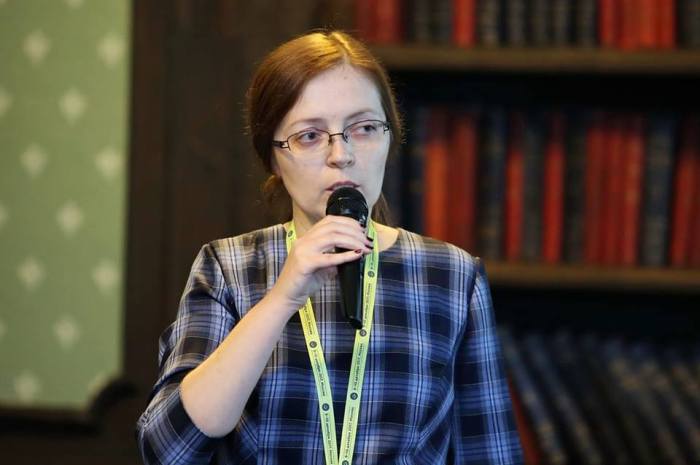 This is Yana Antonova, a pediatric surgeon. Today at six in the morning, police and security services came to her home, which she shares with her eleven-year-old son, and searched it. They did not let her call a lawyer.

Yana has been charged with engaging in the work of an “undesirable organization.”

This is the third such criminal case in Russia, including the case against Anastasia Shevchenko.

It is easy to dismiss this news, to pay it no mind. We can say they knew what they were getting themselves into. They had no business joining “undesirable” organizations and so on. But while some will shrug, I would draw their attention to the fact that Russia’s law books contain laws that give the authorities the ability to bring criminal proceedings against people for their political activism, of whatever stripe, and the authorities can do this shamelessly, openly, and without standing on ceremony.

I copied down the “crimes” allegedly committed by Yana, as listed in her charge sheet. They include two pickets, three Facebook posts, a seminar, and attendance of a political rally.

There was no “extremism” whatsoever in the posts and pickets, nor any calls to illegal actions of any kind. The only thing they had in common was the logotype of a movement that has now been banned. It was banned because the prosecutor’s office decided it was British and “undesirable,” without producing a shred of evidence.

Just read what these officials write. I am not a big fan of raising a ruckus about 1937 whenever something like this happens, but the Russian law enforcement officials who ban “undesirable” organizations and arrest people like Yana nowadays are obviously the heirs of the folks who once upon a time persecuted people for “anti-Soviet” and “counterrevolutionary” actions.

What did Yana Antonova do?

This is a simple story about how quoting Vladislav Listyev and picketing in memory of Boris Nemtsov can end up with your facing six years in prison.

Thanks to Yevgenia Litvinova for the heads-up. Translated by the Russian Reader

This is the third criminal case against Open Russia, this time brought to us by the famous rough justice system in Krasnodar Territory. You heard me right: the very same place where crime boss Aydin Shirinov kicked up his heels at a meeting with Putin. It is the same place where the Tsapkov Gang, who murdered twelve people, and previous to that terrorized the village of Kushchevskaya for years, had personal connections with high-ranking officials in the Russian Federal Prosecutor’s Office. It is the very same part of the country where police officers tortured detainees, and the Committee Against Torture made the documentary film Extreme South about these goings-on in Anapa. It is the very same place where the murderer Vyacheslav Tsepovyaz used his connections thousands of kilometers from home and dined on delicacies in a penal colony in the Far East. It is the home of the notorious Judge Yelena Khakhaleva. It is also the place where grown men dress up as Cossacks and attack political activists, blogger, journalists, and even Baptists with whips. (It was reported just today that in Novorossiysk, men dressed as Cossacks, police officers, and officials from city hall broke up a private worship service, accusing the Baptists of causing a schism in the otherwise homogeneous spiritual world of Russians.)

In this gigantic criminal cesspool, a tumor of lawlessness on the country’s body, law enforcement has finally figured who the really dangerous criminal is. Her name is Yana Antonova, and she has been accused of doing the work of Open Russia. Despite the fact Yana lives in Russia, she has been linked to the Open Russian Movement in Britain. An Englishwoman, basically, is making trouble in Krasnodar Territory. The region has such a great future ahead of it, and not as a hotbed of crime and lawlessness on a nationwide scale, but the bloody English have screwed that up.

Joking aside, the last misdemeanor case against Yana, which opened the way to her criminal prosecution, was for reposting a video on Facebook dealing with the lack of schools in Krasnodar Territory. Law enforcement justified their concocted case against Yana by pointing to the tiny yellow logo in the video, Open Russia’s logo.

In this case, yet another ridiculous concoction and a completely absurd reason (just imagine: she reposted a video on Facebook!) were grounds for filing criminal charges against Yana.

The criminal charges against Yana Antonova are a flagrant attempt to force Russian society to keep its mouth shut and swallow its outrage. The takeaway message is: bear it in silence and don’t complain, otherwise you’ll have real problems.

One more thing. Yesterday, the entire Runet laughed openly at a video in which former riot police (OMON), men who had served in “hot spots, as well as Manege Square and Bolotnaya Square” (how shameful to compare special forces troops who risked their lives in battles and special operations with those who dispersed legal political rallies by their fellow Russians), complained they were being evicted from their government-subsidized apartments.

I have the feeling that, five or ten years from now, we will see a similarly amazing appeal for help from law enforcers in Krasnodar Territory.

“We smashed up art shows, assaulted reporters, chased the Baptists away, and sent Open Russia supporters to jail, but now we have nothing to live on,” they will say.

Since there are so many slackers and fellows with hefty foreheads, dressed up as Cossacks or wearing real uniforms, armed with whips or sporting epaulettes, it is bound to happen. But the government’s coffers are not bottomless.

Natalya Trubachova is a Russian civil rights activist. Translated by the Russian Reader