“They Are Trying to Destroy Us for Daring to Speak Up”
Rural Pensioners Threatened with Fines for Rally against Police Inaction in Investigating Fatal Road Accident
Nadezhda Andreyeva
Novaya Gazeta
August 4, 2018

Residents of the village of Tersa in Saratov Region’s Volsk District have sent an open letter to the president asking him to take charge of investigating road accident in which 30-year-old Alexander Lopasteysky was killed. According to the letter’s authors, the local police have tried to cover up a crime. A criminal case has not yet been opened, although the fatal accident occurred more than two months ago. Over three hundred people, every tenth resident of the village, signed the letter. The residents then held an assembly where they discussed the inaction of law enforcement agencies. The police immediately sprang into action—but not to investigate the accident. The next night, the police made the rounds of the village, threatening residents with huge fines for attending an unauthorized public event.

“To: The Kremlin, Moscow. From: Your Voters”
Railroad Street has never been paved or lighted. On the side of the road stands a black metal cross, fenced off with a chain.

“We didn’t bother to attach a plaque. Everyone knows who it’s for anyway.”

In the early hours of May 28, 2018, 30-year-old Tersa resident Alexander Lopasteysky died here while riding a motorcycle. According to his relatives, he was knocked off his bike and run over by Alexander Letov, driving a VAZ 2108 car. 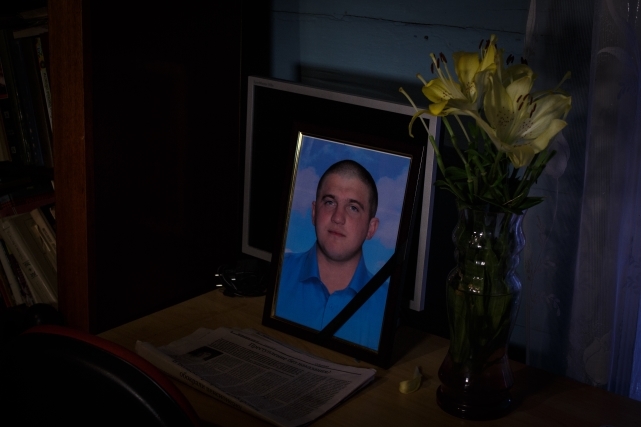 An investigation of the fatal road accident was not opened. Villagers claim an investigator from the district Interior Ministry office came to Tersa to question witnesses forty-two days after the accident.

“The police probably thought they could dillydally, and the collective farmers would forget the whole thing,” argues Tersa resident Viktor Konstantinovich.

“I can’t say the police have been paid off. They have just been negligent in this case. A man accidentally fell off a motorcycle and died through his own fault. It’s convenient. They don’t have to make any effort,” says Valentina Vasilyevna, mother of the dead man, shuffling through photos of her son.

Lopasteysky’s relatives wrote to the district council and prosecutor’s office, asking them to take charge of the investigation. They received formal but meaningless replies to their requests. The only thing left to do was write the president.

“To: The Kremlin, Moscow. From: Your voters in the village of Tersa, Volsk District,” reads the opening of their appeal to the president, which was signed by over three hundred residents of the village, whose total population is approximately three thousand.

As the letter’s authors note, “There has been an attempt to cover the crime up, since Letov’s father is an officer in the Volsk District Police.”

“The entire village waited for the investigation to begin. We were patient for two months. We sent letters to all the relevant authorities. What was left for us to do? People said we should raise a ruckus,” says Lyudmila Lopasteyskaya, the dead man’s sister. 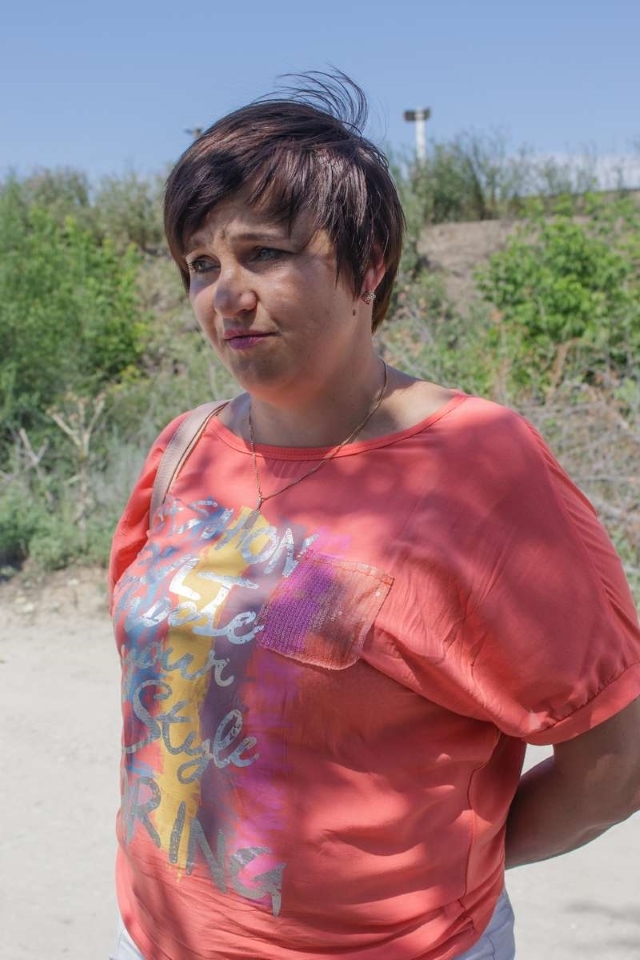 On the social media website Odnoklassniki [“Classmates”], Lyudmila asked everyone concerned about the tragedy to meet by the entrance to the village shop. Around one hundred people came.

Half a dozen police officers from Volsk also came to the meeting, including one armed with a video  camera.

“They said it was forbidden to gather near the porch, that it was a public place. We went into the backyard. We wanted to find out what stage the investigation was at. But the police commander from Volsk turned his back on us and chewed out Lyudmila,” recounts pensioner Lydia Nikolayevna, a former schoolteacher.

“I said to him, ‘You’re treating people with disrespect, turn around and face us. He wouldn’t tell us his name. He only ordered the cameraman to film everyone who opened their mouths and told the other officers to write down people’s license plate numbers,” says pensioner Nadezhda Ivanovna, a former college employee.

People dispersed after village council head Vyacheslav Mokhov promised he would go with the dead man’s relatives to meet with the district police chief.

“We were allowed to enter the police building in twos. Alexander’s daughter and the village head went in, then Alexander’s friends. I wanted to go last. But the police said to me, ‘No, that’s enough,'” says Valentina Vasilyevna. 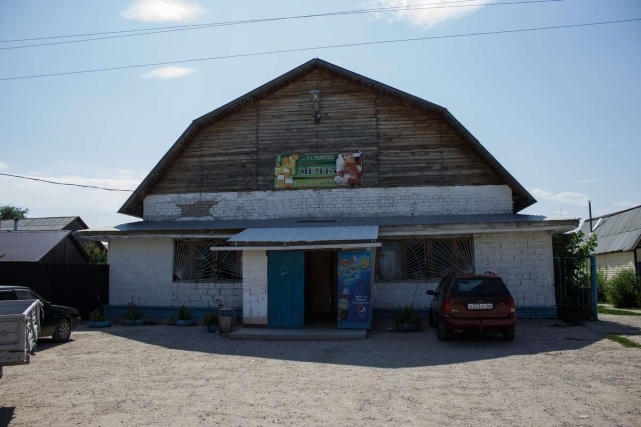 “We told them what evidence had been seen at the accident site. But the police weren’t really interested. They kept asking whether the village council had authorized the protest rally, and why the shop owners had agreed to let us in,” Viktor Konstantinovich recounts.

“They made the rounds of the houses yesterday and the day before yesterday. It was our village beat cop and some officers from Volsk. They knocked on the doors of old women at eleven, eleven-thirty at night. They told people to come outside, shoved papers in their faces, and told them to sign them. They told my wife that by six in the morning they had to get the signatures of the people who had gone to the meeting,” say Viktor Konstantinovich.

He nervously twirls a phone in his hands.

“Dont mention my surname in the newspaper,” he adds.

“He didn’t even get out of the car. I asked where he’d got my name and address. That stopped him short,” recounts Nadezhda Ivanovna.

“He said fines for protest rallies range from 10,000 to 20,000 rubles. My monthly pension is 8,000 rubles. I worked as a lab assistant for thirty-nine years. I spend my entire pension on the gas and light bills, and medicines. We’re frightened.”

“The police are not protecting us. On the contrary, they are destroying us for daring to speak up. Don’t take a picture of me. I have a grandson I’m raising.”

The village beat cop served Lopeystskaya with a notice of initiation of administrative proceedings under Article 20.2 of the Administrative Offenses Code (“Violation of the Rules for Holding a Public Event”), as filed “against an unknown person,” along with an official warning from the Interior Ministry’s district office.

The police informed Lopeystskaya that “in case of a public event, planned by you in the village of Tersa, you could face administrative and criminal sanctions.”

The warning was followed by list of six articles from the Administrative Offenses Code and Criminal Code, including the article that stipulates “organization of an extremist community” as a felony. 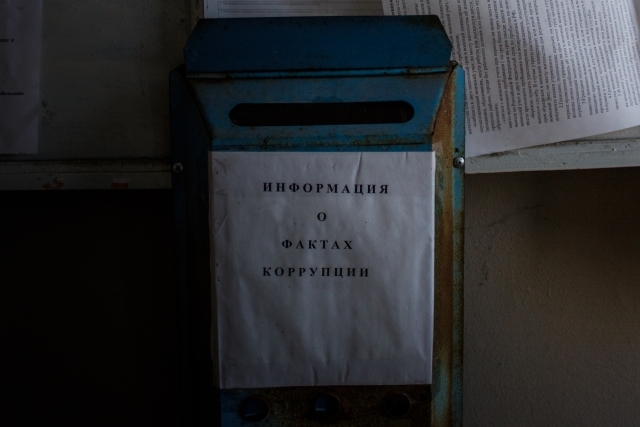 A box marked “Information about Incidents of Corruption” at the local police department. Photo by Matvei Flyazhnikov for Novaya Gazeta

The neighborhood police precinct is in the village council  building. It is quiet and hot in the hallway, and flies are buzzing. The beat cop’s office hours are glued to a window: two hours on Tuesdays and  Saturdays, one hour on Fridays.

I call the mobile phone listed there.

“There was an unauthorized protest rally on my beat, ninety-seven people. I’ve been ordered to gather evidence,” says Lieutenant Alexander Bakanov.

Lieutenant Bakanov does not specify who gave the orders and why. He cuts the conversation short. 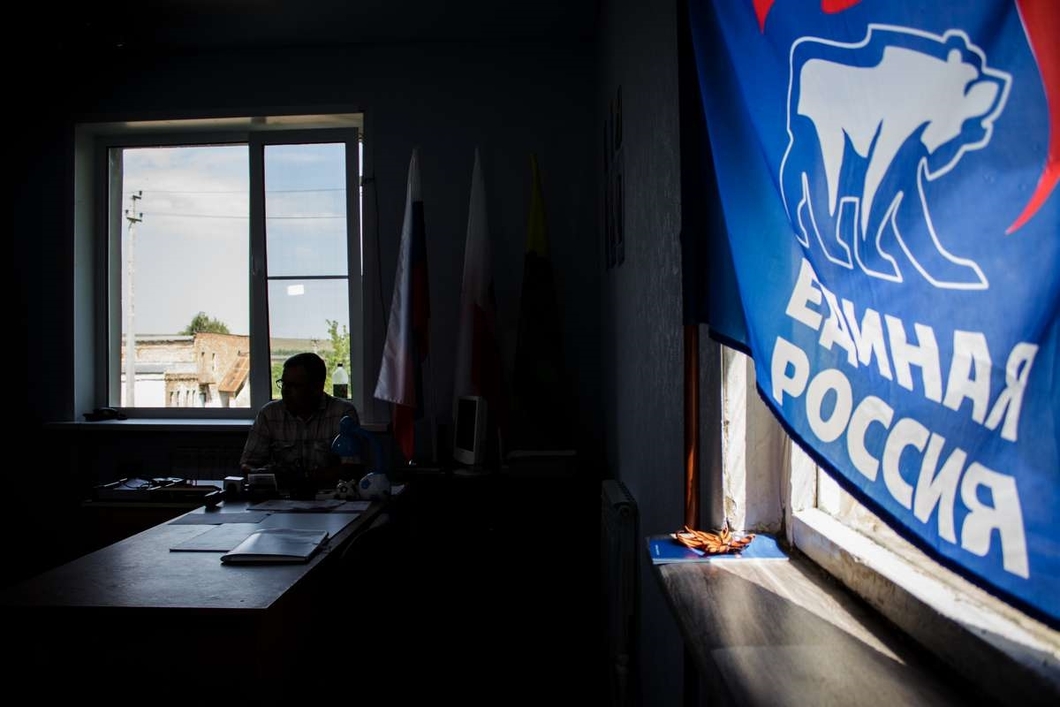 The village council head’s office. A United Russia party flag covers the window on the right. Photo by Matvei Flyazhnikov for Novaya Gazeta

The door to the office of village council head Vyacheslav Mokhov is open. A blue United Russia party flag covers a crack in a window. There are framed photos of the president, the region’s governor, and the district head on the wall. The Volsk coat of arms features a sleeping bear.

The ladies in the office next door chime in unison that the boss has left the village.

Pointing at each other, they argue about who should replace Mokhov when he is out of the office.

Mokhov hangs up on me twice, but then he arrives at the office anyway.

“Don’t you photograph me. I’m scared of everything. This thing can be spun the wrong way,” he says.

“That was the first unauthorized protest rally in the Volsk District ever,” he adds, lowering his voice.

P.S. The press’s attention to this story has been reflected in the surprising speed with which local law enforcement has reacted. While this issue was going to press, a criminal case was opened under Criminal Code Article 264 (“Violation of Traffic Rules”), and the Volsk District Court placed Alexander Letov under house arrest. Volsk District Deputy Prosecutor Andrei Shevchenko refused to comment on the case when asked by Novaya Gazeta.

Meanwhile, the Volsk District Court has begun hearing the matter of Lyudmila Lopasteyskaya’s alleged violation of Article 20.2 of the Administrative Offenses Code. The Tersans summoned to testify have told the court that what happened was not a protest rally, but a meeting of villagers concerned about the tragedy. The next court hearing in the case has been scheduled for August 9.

Thanks to Valentin Urusov for the heads-up. Translated by the Russian Reader