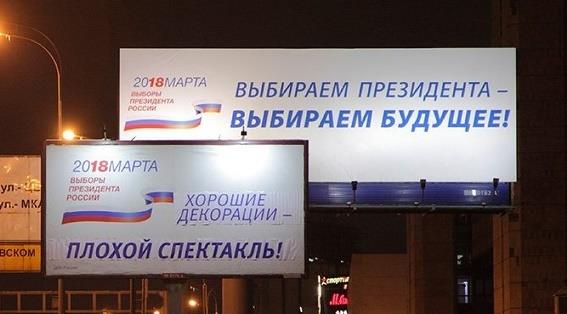 What Has the “Election” Shown Us?

It has shown us that the system for mobilizing dependent Russians (employees, servicemen, etc.) by management at all levels still functions, and that the managers in question (governors, factory directors, and heads of state-sector institutions) are still loyal to the regime. Putin’s personal power rests on the vulnerability of workers, who in Russia have been deprived of the right to strike. It also rests on the loyalty of the bureaucratic caste and corrupted business world, apathy and conformism, and control of the media.

In managed democracy’s topsy-turvy world, voter turnout and Putin’s total share of the vote are indices of political indifference, while boycotting the spectacle is a manifestation of civic activism. Elections in Russia have finally transmogrified into something like an oath of allegiance to the so-called national leader, which has nothing to do with a democratic expression of the popular will.

Undoubtedly, along with the administrative resource, the conservatism of a generation traumatized by the chaotic 1990s, the post-Crimea syndrome, and the careful casting of Putin’s opponents played their role. The Kremlin did its all to divide the forces of protest. Strawberry king Pavel Grudinin served as a scarecrow for voters who did not want a return to the Soviet Union, while Ksenia Sobchak exacerbated the fears of pro-Soviet conservatives vis-à-vis Yeltsinite liberals.

Supporters of the boycott were targeted for assaults and crackdowns. Despite the fact the Voters Strike did not produce a drop in the turnout (too many powerful forces were put into play for that to happen), non-participation in ersatz democracy was the only viable stance, the best option among a host of bad choices. Serving as polling station monitors on election day, we saw what props up both “voluntary” and forced voting. We are glad we did not support this well-rehearsed stunt with our own votes. Russia faces another six years of disempowerment, poverty, lies, and wars—but not in our name.

Only those people who were hoping for a miracle could be disappointed today. Grudinin, whose fans predicted he would make it into the second round, returned worse results than Gennady Zyuganov did in 2012. Some analysts expected that the candidate of the patriotic leftist camp would steal votes from Putin’s conservative electorate, but that did not happen. Nor did Grudinin convince chronic non-voters to go to the polls, since he did not offer them anything new.

Presidential elections, obviously, are not a focal point of politics and an opportunity for change. They are a mode of manipulating public opinion meant to leave everything the way it was.

We need a new politics that undermines the power structures making it possible to manipulate the populace in the interests of the elite. We need a politics that takes on the power of management over employees, the power of the patriarchy over women and young people, and the power of the bureaucracy over local self-government. Since electoral politics has essentially been banned, the democratic leftist movement must rely on nonconformist communities opposed to Putinism in the workplace, education and culture, city and district councils, the media, and the streets.

Only in this way, not as the result of yet more heavy-handed maneuvering by the regime or the opposition to fill the ever more obvious void of popular democratic (i.e., leftist) politics, can a force emerge that is a real alternative to the system. We are going to keep working on shaping that force.

A young woman with a child сame up to another observer and me.

“Where do I get the piece paper I have to photograph the kid with and send to the kindergarten?” she asked.

She showed us a photo of another child. He was holding a piece of paper a bit larger than a business card. The Russian flag, an inscription reading something like “2018 Elections,” and so on were printed on the piece of paper.

“What can I do about it? The kindergarten asked for it,” the woman replied. She went off to continue her search.

To be honest, I did not see members of our polling station’s election commission giving people anything of the sort. They only handed out ballot papers.

On the other hand, we had a whole flashmob of parents taking snapshots of their (kindergarten-age) children dropping ballots into the ballot box.

Thanks to George Losev for the heads-up. Translated by the Russian Reader. Photo courtesy of the Cheboksary Municipal Education Department

The boycott campaign’s objective was to keep voter turnout under 50%. This would have been a clear signal the populace regarded the election as dishonest and unfair. We lost this battle, but we need to understand that not everything was smooth and cool on part of our opponents.

The prinicipal techniques for rigging the vote were as follows.

1. Reducing voter rolls. I hung out at a polling station in a Moscow Region village for a mere half an hour, and six of the twenty-two people who tried to vote while I was there were not listed on the rolls. In my hometown of Zhukovsky, the difference between the number of voters on the rolls and the growth in the town’s population between 2012 and 2018 was 5,000 people or 7% of all potential voters, meaning the voter rolls had been pruned. The point of the trick is simple. People who are unlikely to show up to vote are struck from the rolls, thus reducing the overall numbers of registered voters while increasing the relative weight of the turnout.

3. The massive use of the administrative resource for ratcheting up the turnout. Did you know that a quarter of all voters showed up at their polling stations before ten in the morning? There were endless scandals over the fact they were not given some calendars or other that their children were supposed to collect for school. Officials also held simultaneous polls to rate public amenities in which they used ballots with people’s names printed on them. People photographed their ballot papers at polling stations. And, of course, everywhere there were exhibitions about the great outdoors in Crimea, fairs offering cheap food, pop music, and patriotic songs about our beloved president.

The problem is that, despite the administrative resource, participating in this farce was also a choice. If people had refused en masse to follow the orders of their bosses at work to vote a certain way, they would not have been fired or deprived of their bonus pay. But the distance between the value of elections and the discomfort caused by taking a brave civic stance is, for now, so huge, it is somehow ridiculous even to appeal to it.

I was riding tonight in a taxi driven by someone with a surprising name: Nasimjon. I was watching Solovyov’s show on my telephone. His guests were voicing the warmest feelings of devotion to the winner of the race.
“He got so many votes not because he had the administrative resource behind him, but because people love and respect him,” said Andrei Maximov, presenter of the program Duty Officer for the Country.
My [sic] Nasimjon was silently listening to this splendor with me. At some point, moved by the emotions of the people speaking, he voiced his own.
“I was so scared today.”
“What was wrong?”
“I typed the question, ‘How much did Putin get in Moscow?’ into Yandex. The answer I got was eleven percent for him, and seventy-three percent for Grudinin. I was frightened.”
“What’s wrong with that?”
“Because the situation in the world is such that where would be without Putin? Look what’s going on around us: England and America again. Who else can deal with them?”
“Why do we need to deal with America?”
“They dream of ripping us to shreds. They kill everybody. They occupy everybody and kill them.”
“Who have they killed?”
“Iraq, Afghanistan. They organized the coup in Ukraine.”
“Did you hear that on TV?”
“No, my passengers told me. Plus, the Americans think everyone else is stupid.”
“Who told you that?”
“My Armenian friend. He’s lived in America for twenty years. He says that in the textbooks over there it’s written that Americans are smart, and everyone else is stupid. But Putin has made everyone fear us.”
“That’s a good thing?”
“It is.”
“Maybe it would be better if we were respected and liked?”
“It doesn’t work that way with the Americans. We have to make them fear us.”
“So, how did this thing with Putin end? You believed the figures were real?”
“Yes, I did, and that’s why I got scared. But then I turned on Business FM Radio, and it turned out it was the other way around, that Putin had seventy-three percent, and Grudinin, eleven percent. So now everything here is going to be fine.”
“What’s going to be fine?”
“Putin’s friends have already had their fill of stealing. If new guys had come to power, it would have started all over again.”
Ugh.

The author is a presenter on Radio Svoboda, the Russian-language service of Radio Free Europe/Radio Liberty. Translated by the Russian Reader. Photo of the cast of Taxi courtesy of Asian Image

P.S. “What the taxi driver told me” has long been a common genre in Russian social media, especially the Russophone segment of Facebook. In most such stories, whether true or fabricated, the taxi driver is a stand-in for (debased) popular wisdom, for the Russian folk (russkii narod), meaning “ordinary,” “rank-and-file” Russians, whom the Russian liberal intelligentsia have historically imagined as a benighted, homogeneous mass.

The twist in this particular variation on the yarn is that the taxi driver’s name, Nasimjon, indicates he is clearly not ethnically Russian, meaning he hales from the Caucasus or Central Asia, or he was born in Moscow, but his parents moved there from one or other of these regions.

Even with this “politically correct” update, the genre remains problematic. It is more a symptom of the liberal intelligentsia’s failure to account for its own role in generating and maintaining the successive tyrannies that have plagued Russia since the nineteenth century, when the intelligentsia per se could be said to have been born as a kind of social subclass or metaclass, than it is a window onto the world of the “common people.”

To put it less murkily, if you stop talking to “taxi drivers” and listen to what actual Russians of all shapes, sizes, colors, and classes have to say and find out how they have either adapted to the Putinist tyranny or resisted it, you are as likely to discover resistance and clear thinking among supposed members of the Russian folk, among the people whom liberal Russians contemptuously refer to as “philistines” (obyvateli), as you would among the self-identified liberal intelligentsia.

Over the last several years, this website has featured many such inspiring stories of grassroots, working-class and lower middle-class resistance to the current Russian despotism, including the saga of the country’s fiercely militant independent truckers and the tale of the so-called partisans of Suna, a group of pensioners in Karelia who camped out in their beloved local old-growth forest to protect it, its environment, and their own humble livelihoods from local officials and developers, who wanted to build a road through it and turn part of it into a sand quarry.

Of course, there have also been many tales of similarly fierce, thoughtful resistance by Russians who by virtue of their educations and professions could be classified as intelligentsia. It is just that the vast majority of such intelligenstia militants are too clear sighted to sink to the vulgar sociology and flagrant mythologeme that would blame uneducated, poor, downtrodden, disempowered, and mostly invisible Russians for the country’s problems and Putin’s long-lived and wholly engineered “popularity.” TRR