Today, October 11, is celebrated as National Coming Out Day in many countries around the world. Unfortunately, as respected Russian journalist and blogger Andrei Malgin reminded readers of his LiveJournal blog a few days ago, the Russian State Duma will, allegedly, soon be considering a bill that would make “non-traditional sexual relations” grounds for stripping Russian gays and lesbians of their parental rights. 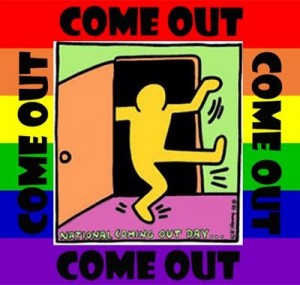 The State Duma has given the green light to Draft Bill No. 338740-6, “On Amending Article 69 of the Family Code of the Russian Federation (On Expanding the List of Grounds for Terminating Parental Rights).” A single line will be added to the list—a mere four words, but what weighty words they are.

Article 69 of the Family Code now reads as follows:

Parents (one of them) may be deprived of parental rights, if they:

shirk the discharge of parental duties, including the willful refusal to pay child support;

refuse without good reason to take their child home from a maternity hospital (department) or other medical facility, educational establishment or social welfare institution, or other similar institutions;

treat their children cruelly, including exercising physical or mental violence against them, and infringing on their sexual inviolability;

Full documentation of the bill is on the State Duma’s web site.

Thus, after the bill is passed into law, the Family Code of the Russian Federation will contain the following provision:

Parents (one of them) may be deprived of parental rights, if they:

So, one divorced spouse wants to deprive the other of parental rights. She or he just has to inform the court that their ex-spouse once had non-traditional sexual relations. To make the charge stick, they can produce “witnesses” or get an affidavit from the neighborhood police inspector.

Or even better. Police raid a gay club and check people’s internal passports. Do any of them have children listed in their passports? That’s that: we’ll deprive them of their parental and send the children to an orphanage, where things will be better for them.

And what scope for grassroots activism, for endless denunciations on the part of vigilant neighbors, disgruntled relatives, veterans committees, and so on.

Especially because, unless I’m mistaken, there is still no definition anywhere of what is considered traditional and what isn’t. If spouses have had oral sex, what is that? Traditional?

In an “Explanatory Note to the Bill,” the State Duma Committee on Families, Women and Children justifies the need to amend the Family Code thus:

In accordance with Article 63, Part 1 of the Family Code of the Russian Federation (hereinafter, “the Code”), parents are responsible for the upbringing and development of their children. They are obliged to take care of the health and the physical, mental, spiritual and moral development of their children […] Through life lessons and sometimes by their own example [they are obliged] to instill in the child traditional family values, loyalty to the Fatherland, respect for the older generation, and many other universal values.**

Unfortunately, experience shows that parents often do not completely fulfill their responsibilities for raising children, thus depriving them of a moral compass. […] In the final analysis, this is the cause of poor development, the degradation of a child’s personality and deviant behavior. Timely government assistance to such a child makes it possible to adjust their upbringing by transferring them to a foster family or putting them in the care of relatives or relevant institution. Implementing this assistance is only possible after the termination of parental rights, thus insulating the child from the immoral lifestyle of the parents or one of the parents.

On this basis, it appears that when one of a child’s parents has sexual contacts with persons of the same sex, the harm that may be caused to the psyche of this child is huge and cannot be measured by the Administrative Offenses Code, as the mother or father is a role model for their child. […] According to experts, the number of people in Russia with a non-traditional sexual orientation is around 5-7% (for large cities, the percentage is slightly higher), of which at least a third have children.

Based on this fact and the above-mentioned reasons, this bill proposes supplementing Article 69 of the Family Code of the Russian Federation with a new paragraph, according to which the grounds for terminating parental rights would be non-traditional sexual orientation on the part of one or both parents.

The adult population of Russia is 119 million people. Five percent (we’ll use the lower figure) is six million people. One third of them have a child, meaning there are two million such children. And what if they have two or more children? This is difficult to take into account, so let’s stick to the one-child minimum as the basis of our calculations. What do we end up with? It turns out that the State Duma is planning, in the spring of 2014, to add two million children to the ranks of the country’s orphans.

* In his original post, Mr. Malgin does not quote the current wording of Article 69 in full. We have cited it here for convenience’s sake. The translation is our own.

** Actually, Article 63 of the Family Code does not stipulate that parents are obliged to inculcate “traditional family values, loyalty to the Fatherland, respect for the older generation,” etc., in their children.

UPDATE. The draft bill has, reportedly, been withdrawn by its author, MP Alexei Zhuravlyov, but a spokesperson for him said that it would be revised and resubmitted to the State Duma. The news prompted journalist Masha Gessen to write this comment.