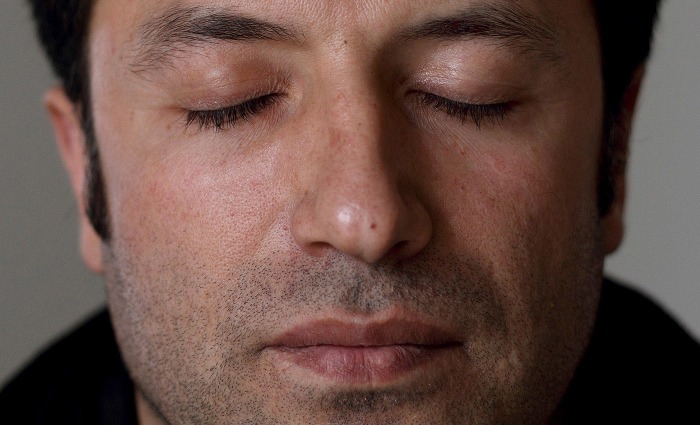 Photographer Yuri Ivashchenko looks for people who have been assaulted by racists and homophobes in Russia. He asks them to make a schematic drawing of what happened to them on a snapshot of the crime scene.

Mikhail came out to a new friend, who violently assaulted him. Mikhail spent a week in the hospital. A magistrate judge rejected Mikhail’s lawsuit, since Mikhail had not listed the assailant’s birthplace, registered address, and other personal data.

Ibrahim and his brother, immigrants from Central Asia, were assaulted at the railway platform, where they had gone to see off a Belarusian friend. When eyewitnesses of the assault called the police, the officers who arrived on the scene suspected the brothers had been involved in a recent rash of telephone thefts on commuter trains. Despite eyewitness testimony corroborating the Yunusovs’ alibi, a court found them guilty of stealing other people’s property and sentenced Ibrahim to a year of probation. His brother Rustam was sentenced to six months of probation. The six months they had spent in a pretrial detention facility was deducted from their sentences.

Alexander was standing at a tram stop when several men attacked him. Fighting them off, he ran towards the Sokol subway station. Screaming, “Kill him!” ten to fifteen young men chased Alexander. They caught up with him and surrounded him on a lawn. One of the assailants hit Alexander in the back. He fell to the ground and was beaten up by the mob. The assailants took Alexander’s telephone and wallet, which contained around 10,000 rubles. Later, passersby called an ambulance. Alexander was taken to hospital, where he spent over a month.  Doctors have diagnosed Alexander with a bruised spinal cord. A criminal investigation of the assault is underway, and there are suspects in the case.

Mele was attacked in the late evening at the turnstile to the subway by a man shouting racist slogans.

The assailant was arrested. He confessed his guilt in court and was released after reaching a settlement with Mele that involved paying him compensation and apologizing.

A group of drunken young men, their faces covered in scarves, attacked Anvar and two of his friends when they were returning home from work. Noticing the young men were wielding knives, Anvar decided to defend himself with a beer bottle and managed to wound one of the assailants. Subsequently, the wounded young man was arrested in Saint Petersburg for stealing tennis shoes and testified about the incident in the subway. The court, however, found Yusupov guilty and sentenced him to six months’ imprisonment in a penal colony, which was later commuted to a fine.

John was walking down the street in rainbow-colored glasses when he drew even with two young men. One of them bumped John hard with his shoulder. John asked the passerby why he had done this. The man replied that he hated “fags” and head-butted John. John responded by pepper-spraying the assailant, who fled the scene with his companion. The police refused to open a criminal investigation into the incident.