The Balukh Trial: Testimony of Prosecution’s Witnesses Diverges
Grani.Ru
May 15, 2018

The testimony of the prosecution’s witnesses diverged during the latest hearing in the third trial of the Crimean Ukrainian political activist Vladimir Balukh, who allegedly assaulted Valery Tkachenko, warden of the Interior Ministry’s Temporary Detention Facility in the Razdolnoye District, reports the news website Krym.Realii. 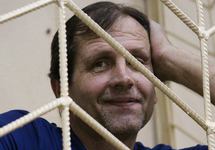 Meanwhile, the facility’s deputy warden, Dmitry Karpunov, testified he did not see the conflict itself. He could only report Tkachenko had entered Balukh’s cell, whence an “intense conversation” was audible, and then the warden exited the cell stained with some kind of liquid.

Karpunov said there had been no attack. Balukh had not committted any violations of prison regulations, not counting his refusal to put his hands behind his back.

Our correspondent reports that, during his testimony, Major Mambetov said, “We are not the Gestapo. We don’t assault people. We police officers do not offend anyone, and we treat all convicts the same.”

The next hearing was scheduled for Wednesday, March 16.

Balukh went on hunger strike on March 19, 2018. May 15 was thus the fifty-eighth day of his protest against the unjust verdict in his previous trial, in which he was convicted of illegally possessing ammunition. On Tuesday, the Crimean Human Rights Group published a letter from Baluch, in which the political prisoner wrote that, on the twenty-fifth day of his hunger strike, his social defender, Archbishop Kliment of the Simferopol and Crimean Ukrainian Orthodox Church of the Kyiv Patriarchate, urged him to moderate his hunger strike. Whereas earlier Balukh had consumed only water and tea, after his conversation with Kliment he drank two glasses of oatmeal kissel and ate fifty to seventy grams of dried breadcrumbs everyday, and added honey to his tea.

Balukh made the decision, he wrote, “To rule out the possibility of forced feeding and the use of medical means of life support I have not authorized, and also to avoid causing irreparable grief to my loved ones.”

Earlier, Balukh’s common-law wife Natalya had pointed out her husband suffered from liver disease, and it was unacceptable for him to go on hunger strike.

Vladimir Balukh and his attorneys Olga Dinze and Taras Omelchenko, May 15, 2018. Photo by Alexandra Yefimenko. Courtesy of Grani.Ru

The hearing on the merits of Baluch’s third trial began April 2. Tatyana Pyrkalo, chair of the Razdolnoye District Court, which is controlled by Russia, has presided over the trial. Aside from Archbishop Kliment, Balukh is defended by three professional lawyers, Dmitry Dinze, Olga Dinze, and Taras Omelchenko. Ms. Dinze and Mr. Omelchenko were present at Tuesday’s hearing.

The 47-year-old Balukh, a farmer from the village of Serebryanka in the Razdolnoye District, has beeen charged under Article 321 Part 2 of the Russian Criminal Code (non-threatening violence against a penitentiary officer during performance of his duties), which is punishable by a maximum of five years in a penal colony. According to the prosecution, on August 11, 2017, during morning rounds of the cells at the Razdolnoye Temporary Detention Facility, where Balukh had been transferred from a remand prison while he attended his second trial, Balukh struck Warden Tkachenko in the stomach with his elbow while they were in the hallway, after which he went into his cell, grabbed a bottle of detergent, and struck the policeman on the arm.

Actually, Tkachenko himself assaulted Balukh, insulted his ethnicity, and swore at him. Moreover, these actions were captured by CCTV cameras. We also know the warden had verbally assaulted Balukh prior to the incident. Balukh was framed on the new charges after his defense lawyers filed a complaint against Warden Tkachenko with the police.

During the pretrial investigation, conducted by N. Bondarenko, an official with the Razdolnoye Interregional Department of the Russian Investigative Committee, Warden Tkachenko refused to report to a face-to-face confrontation with Balukh, although Russian law does not provide this right to victims.

Until today, only two hearings had been held in the case. Warden Tkachenko took the witness stand at the second hearing, on April 11.

As defense lawyer Dmitry Dinze noted after the hearing, “The funniest thing about the whole case is that the so-called victim has not evinced any get-up-and-go. The criminal charges did not interest him at all. He was ordered to file a report and draw up all the papers in order to get the case opened. Personally, he has no material and emotional gripes against my client. It transpires the Razdolnoye District Police Department had a stake in cooking up more criminal charges against Balukh.”

In December 2013, during the early weeks of the Revolution of Dignity, Balukh hung the red and black flag of the Ukrainian Insurgent Army (UPA) above his home in the village of Serebryanka. After awhile, the flag was surreptitiously torn down at night, and the farmer replaced it with the Ukrainian national flag. After Crimea was occupied, Balukh did not apply for Russian citizenship.

Balukh was convicted for the first time in 2016 and sentenced to 320 hours of community service for, allegedly, offending a government official, as stipulated by Article 319 of the Russian Criminal Code. The “victim” in this case was Lieutenant Yevgeny Baranov, a field officer with the Center for Extremism Prevention (Center “E”), who was involved in searching Balukh’s home in November 2015.

Balukh faced trumped-up charges for the second time after he attached a sign inscribed “Heaven’s Hundred Heroes Street, 18″ on his house. He was jailed in a remand prison, where he was imprisoned for nearly a year before he was transferred to house arrest. He was returned to the remand prison after his conviction on the second set of charges. Balukh was charged under Article 222 Part 1 (illegal trafficking of ammunitition) and Article 222.1 Part 1 (illegal trafficking of explosives) after police planted gunshells and TNT blocks in his home during a routine search. Earlier this year, Balukh was sentenced to three years and five months in an open penal colony.