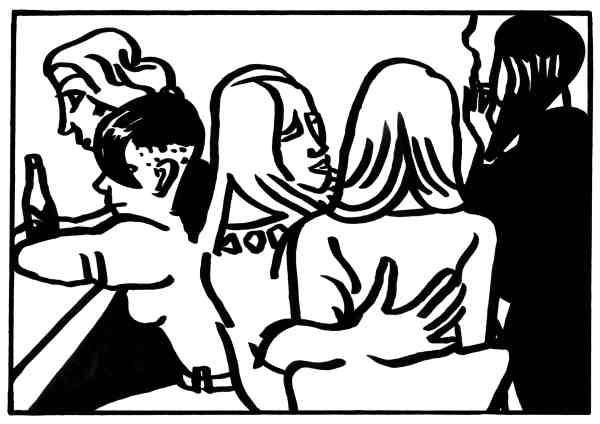 The subjects and viewers of my series 18+ often ask why a heterosexual female artist would draw lesbian couples. I have a few answers to that question, but the most truthful would be that what is so fascinating about lesbian clubs is not so much the distinctive sexuality there as the separate feminine environment in which the male’s role at the center of the female universe has been reduced to zero. The chance to depict the complex psychological connections between women is captivating. There are few works from this perspective in art. In public life, attraction between women is almost never manifested. By doing a number of drawings in semi-private lesbian clubs, I was looking for a new visual language. Lesbian couples have a different way of gesturing and moving than heterosexual couples.

If I lived in another country, I probably would have limited myself to this search for a new plasticity. In Russia, though, the topic of LGBT is inextricably bound up with political and social issues. When I agreed to serve on the jury of the Side by Side Film LGBT Film Festival in 2013, I realized the extent to which the LGBT community was persecuted. It was only during the festival, however, that I found out there are different levels of secrecy within the community, in particular, that lesbians are more invisible and stigmatized than gays. Hence I deemed it important to quote the subjects of my series directly.

“We socialize with other activists, who accept us wholly and don’t think of us as ‘poor things.’”

Simultaneously with sketching in the clubs, I have begun making portraits of lesbian families and couples, including direct quotations from them as well. The main questions I ask are what has changed for them after the law banning homosexual “propaganda”* passed and how society itself is involved in stigmatizing different social groups, including sexual minorities.

* In 2013, Russia passed a law banning the “propaganda” or promotion of nontraditional sexual relations among minors. Any information, printed matter or cultural event involving LGBT topics must be labeled “18+.”

“When I was fifteen, my only source of information was an article about an ex-female convict, who had been arrested at the apartment of her female ‘cohabitant.’ The word was a sign to me that such relationships were possible.”

“As a young woman, I didn’t come out to my female friends. I thought being a lesbian was like being a monster. I was afraid I’d scare them off.”

“At work, I turn my MP3 player on during lunch so I don’t have to join in the conversations.”

“When the talk at work turned to families, I always felt like I was sitting on a time bomb.”

“I avoid conversations like that. I say I don’t have the time or I go have a cigarette.”

“When I’m applying for a job, in the box marked ‘marital status’ I always write that I’m living with a woman. I want to know right away whether it’s a homophobic workplace or not.”

“The homely old domestic clucks took pity on me.”

“Is there a stigma? We wouldn’t know. We have a very narrow circle of friends made up only of those who get it.”

“Our circle of friends is made up of other lesbians and feminists.” 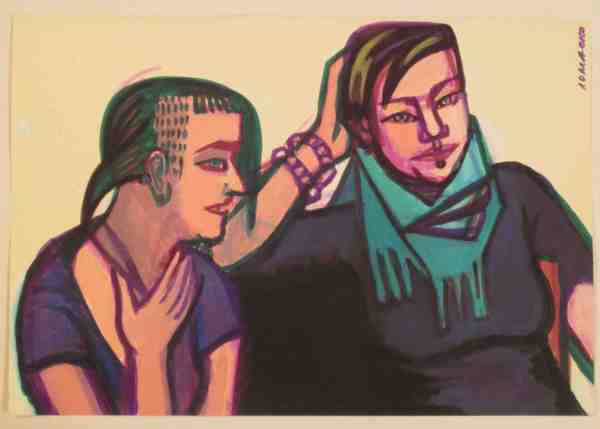 “In Russia, the way the majority of people talks boils down to marginalizing others.”

“I think that being a heterosexual public feminist is even harder than being a closeted lesbian.”

“Men think lesbians are beautiful, long-haired young women who kiss each other.”

“Butches, who model their behavior on guys, bust men’s balls less than cool, beautiful women whose sex appeal is meant for women. The realization they have no need for them bothers men a hundred times more.” 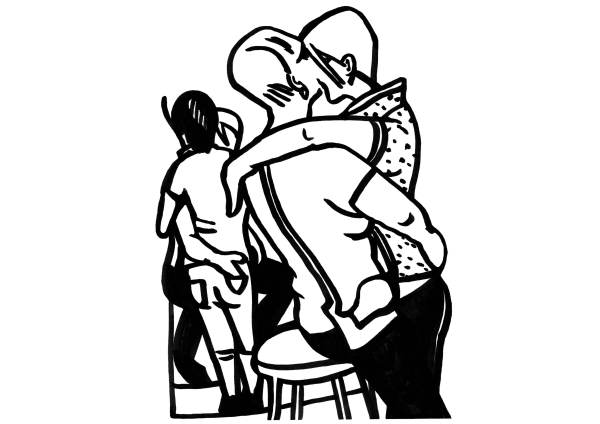 “Until 2012, the lesbian scene was completely invisible. That was even cool in a way: girls would kiss on the street, and no one paid any mind. Now people are suspicious of everybody.”

“We don’t meet anyone in the clubs. We go there to hold hands openly.”

“Since the homophobic law has been passed, I suspect that people on the street and in the subway are suspicious of me.”

“Before, you could be blasé, but now things are scary. We cannot believe we live in the same reality with these people. We are thinking about emigrating to Canada.”

“After the homophobic law was passed, people gave us dirty looks in the subway. But now there is a crisis, and no one could give a shit.”

“People are afraid the authorities will remove children from LGBT families. That is a really serious danger.”

“We are not going to flee Russia like rats.” 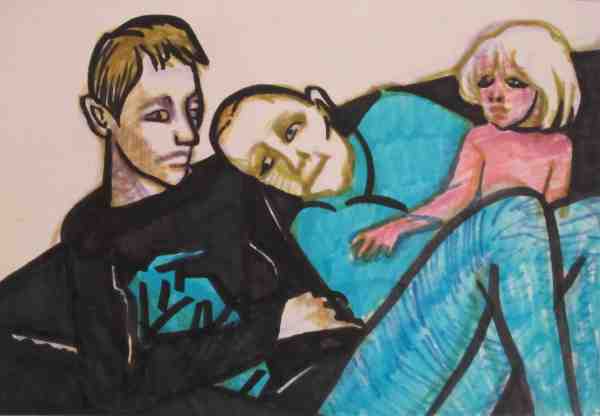 18+ will be exhibited as part of the project Pas de Deux during the Fumetto International Comics Festival in Lucerne, March 7–15, 2015. Ms. Lomasko will be giving a lecture at the festival on Tuesday, March 10, at 5:30 p.m. Check here for more details.